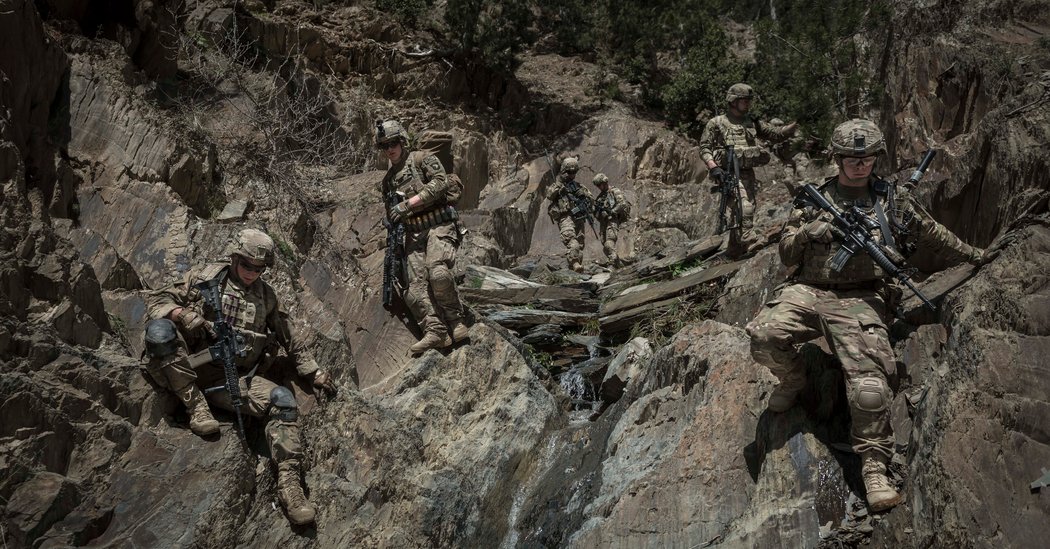 DOHA, Qatar — The United States is expected to sign a peace deal with the Taliban insurgency on Saturday that for the first time after two decades of grinding warfare would lay out the prospect of a final withdrawal of American troops from Afghanistan.

The signing in Doha, Qatar, is seen as a vital step toward negotiating a more sweeping peace deal that could end the insurgency altogether, after years of unrelenting violence that took the lives of more than 3,500 Americans and coalition troops and tens of thousands of Afghans since the U.S. invasion in 2001.

But the agreement is dependent on the Taliban’s fulfillment of major commitments that have been obstacles for years, including breaking with international terrorist groups such as Al Qaeda. And it hinges on far more difficult negotiations between the two Afghan sides to come, addressing the shape of a potential power-sharing government and a lasting cease-fire — both anathema to the Taliban in the past.

The Trump administration has cast the deal as its pledge to a war-weary American public, for whom the Afghanistan war has defined a generation of loss and trauma and roughly $2 trillion in expenditures but has yielded no victory.

“If the Taliban and the government of Afghanistan live up to these commitments, we will have a powerful path forward to end the war in Afghanistan and bring our troops home,” President Trump said on Friday ahead of the signing of the deal, which he dispatched Secretary of State Mike Pompeo to attend.

“These commitments represent an important step to a lasting peace in a new Afghanistan, free from Al Qaeda, ISIS, and any other terrorist group that would seek to bring us harm.”

At the height of the war, there were more than 100,000 American troops in the country, and tens of thousands of others from about 40 nations in the United States-led NATO coalition.

In recent years, it has been Afghan soldiers and police who have borne the brunt of the fighting, at a horrific cost in casualties and trauma.

From the start of the talks, late in 2018, Afghan officials were troubled that they were not at the table with American and Taliban officials. They worried that Mr. Trump would abruptly withdraw troops from Afghanistan without securing any of the conditions they saw as crucial, including a reduction in violence and a Taliban promise to negotiate in good faith with the government.

The best-case prospect laid out by the deal is alluring: ultimately, the possibility for Afghans of an end to conflict that in one form or other has stretched for 40 years.

But behind that hope lies a web of contradictions.

The United States, which struggled to help secure better rights for women and minorities and instill a democratic system and institutions in Afghanistan, is reaching a deal with an insurgency that has never renounced its desire for a government and justice system rooted in a harsh interpretation of Islam. Though the Taliban would get their primary wish granted by this agreement, the withdrawal of American troops, they have made no firm commitments to protect civil rights for people they brutally repressed when in power.

Among the Taliban, bringing the world’s premier military power to the point of withdrawal has widely been seen as a victory with few caveats. And the public messaging from Taliban officials has not been conciliatory.

“This is the hotel that tomorrow will turn into a historic hotel,” the Taliban’s multimedia chief posted on Twitter on Friday with a photograph of the Sheraton in Doha, site of the signing. “From here, the defeat of the arrogance of the White House in the face of the white turban will be announced.”

In the hours before the signing, dozens of the Taliban officials based in Doha carried out what appeared a small march in a residential corner of the city. Many of the members were carrying the white flag of the toppled Taliban government.

“This is a day of victory — victory has come with the help of God,” said Sher Mohammad Abas Stanekzai, their deputy chief negotiator, in a video of the event released by Taliban channels. “Our mujahedeen fighters should be cautious not to become arrogant in this moment of victory.”

The expected deal provides a conditional schedule for the withdrawal of the roughly 13,000 remaining American troops. In the first phase, about 5,000 are to leave in 135 days. The withdrawal of the rest is expected to happen over the next 14 months, depending on the Taliban keeping their end of the bargain.

The insurgents had to pledge to break with international terrorist networks and forbid Afghanistan’s use as a base for attacks by groups like Al Qaeda, which launched the Sept. 11 terrorist attacks on the United States from the haven the Taliban granted it in Afghanistan.

As part of the deal, the Taliban would also agree to open talks directly with the Afghan government and other leaders, ostensibly to negotiate a political settlement and an eventual cease-fire. But an immediate cease-fire to address the bloodshed that regularly rips through Afghanistan is not part of the agreement.

While American diplomats had pushed for a cease-fire, they settled for a “reduction in violence” and tested it over a stretch of seven days before the signing. Officials said attacks had dropped by as much as 80 percent during that period, and the hope was that the reduction could continue in the next phase, until the two Afghan sides could agree to a more comprehensive cease-fire.

Zalmay Khalilzad, the veteran diplomat leading the American peace efforts and himself a native of Afghanistan, long insisted that the United States was not simply seeking a withdrawal agreement, but “a peace agreement that enables withdrawal.”

The Taliban’s willingness to enter negotiations with other Afghans, including the government, over a political settlement has offered hope and fear to the Afghan people.

The hope is that a durable peace can be reached after generations of conflict and suffering. The fear is that the most difficult work lies ahead, and that the Taliban will come to the negotiations emboldened by the American withdrawal announcement after years of insurgent gains on the battlefield against the badly bloodied Afghan security forces.

The nearly two decades of war have been devastating, both in human and economic terms, though exact numbers are in many cases hard to come by.

Much of the peace negotiations happened in a year of record violence from both sides. In just the last quarter of 2019, the Taliban carried out 8,204 attacks, the highest in same period over the past decade. The United States dropped 7,423 bombs and missiles during the year, a record since the Air Force began recording the data in 2006.

In the past five years, about 50,000 members of the Afghan security forces have been killed, and tens of thousands of others wounded. The Taliban’s losses are harder to verify, but their casualty rate is believed to be comparable. Out of about 3,550 NATO coalition deaths in Afghanistan, nearly 2,400 have been Americans.