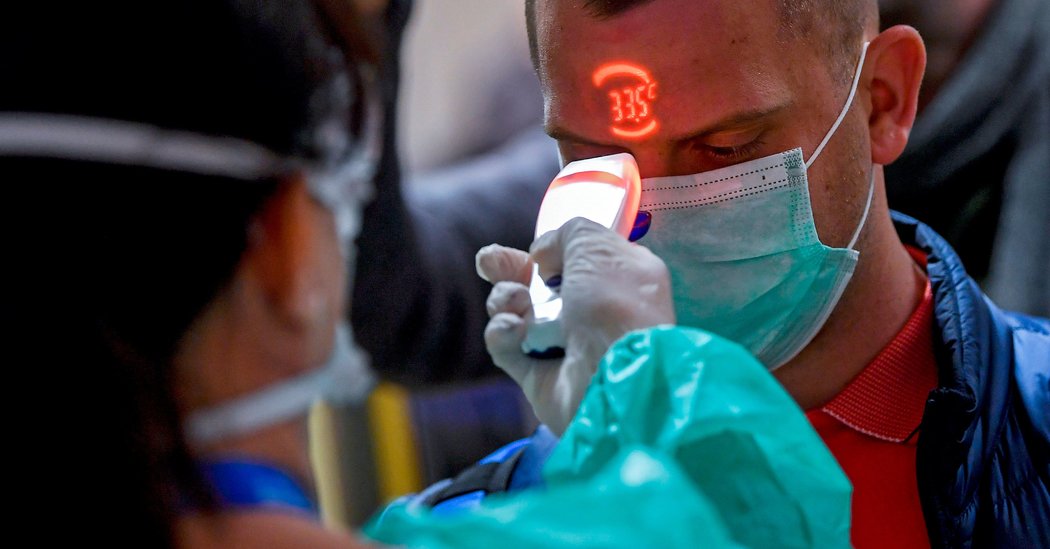 In early 2018, during a meeting at the World Health Organization in Geneva, a group of experts I belong to (the R&D Blueprint) coined the term “Disease X”: We were referring to the next pandemic, which would be caused by an unknown, novel pathogen that hadn’t yet entered the human population. As the world stands today on the edge of the pandemic precipice, it’s worth taking a moment to consider whether Covid-19 is the disease our group was warning about.

Disease X, we said back then, would likely result from a virus originating in animals and would emerge somewhere on the planet where economic development drives people and wildlife together. Disease X would probably be confused with other diseases early in the outbreak and would spread quickly and silently; exploiting networks of human travel and trade, it would reach multiple countries and thwart containment. Disease X would have a mortality rate higher than a seasonal flu but would spread as easily as the flu. It would shake financial markets even before it achieved pandemic status.

In a nutshell, Covid-19 is Disease X.

Even as there are signs that the epidemic’s spread might be slowing in China, multiple communities and countries have now reported sustained transmission in their midst. The number of confirmed cases has exploded in South Korea in recent days. In Italy, villages and towns are on lockdown, Fashion Week in Milan has been disrupted and festivals are being canceled while public health authorities search for patient zero to identify who else is likely infected and may spread the disease in Europe. Iran appears to have become a new hub of transmission. The looming pandemic will challenge us in new ways, as people try to evade quarantines, and misinformation campaigns and conspiracy theorists ply their trade in open democracies.

But as the world struggles to respond to Covid-19, we risk missing the really big picture: Pandemics are on the rise, and we need to contain the process that drives them, not just the individual diseases.

Plagues are not only part of our culture; they are caused by it. The Black Death spread into Europe in the mid-14th century with the growth of trade along the Silk Road. New strains of influenza have emerged from livestock farming. Ebola, SARS, MERS and now Covid-19 have been linked to wildlife. Pandemics usually begin as viruses in animals that jump to people when we make contact with them.

These spillovers are increasing exponentially as our ecological footprint brings us closer to wildlife in remote areas and the wildlife trade brings these animals into urban centers. Unprecedented road-building, deforestation, land clearing and agricultural development, as well as globalized travel and trade, make us supremely susceptible to pathogens like coronaviruses.

Yet the world’s strategy for dealing with pandemics is woefully inadequate. Across the board, from politicians to the public, we treat pandemics as a disaster-response issue: We wait for them to happen and hope a vaccine or drug can be developed quickly in their aftermath. But even as Covid-19 rages, there still is no vaccine available for the SARS virus of 2002-3, nor for HIV/AIDS or Zika or a host of emerging pathogens. The problem is that between outbreaks, the will to spend money on prevention wanes, and the market for vaccines and drugs against sporadic viral diseases isn’t enough to drive research and development.

During its World Health Assembly in 2016, the W.H.O. set up the R&D Blueprint to bridge this gap and announced a priority list of pathogens that most threaten global health and for which no vaccines or drugs were in the pipeline. SARS made the list, as did MERS, Nipah, Ebola and other rare but serious diseases caused by epidemic viruses. The Coalition for Epidemic Preparedness Innovations — a global partnership between public, private, philanthropic and civil society organizations launched at Davos in 2017 — stepped up to the plate and sourced funding to develop vaccines and therapeutics against some of these.

To escape from the Age of Pandemics, we’ll need to treat them as a public health issue and start working on prevention in addition to responses. Our first goal should be to broaden our armory against potential mass epidemics. When some of us added “Disease X” to the W.H.O.’s priority list two years ago, we wanted to make the point that it’s not sufficient to develop vaccines and drugs for known agents when the next big one is likely to be a different pathogen — a virus close to SARS, say, but not close enough that the same vaccine can work against both.

As Covid-19 strikes today and a spate of other pathogens are ready to emerge in the future, we continue to butt up against nature. Scientists estimate that there are 1.67 million unknown viruses of the type that have previously emerged in people. Discovering and sequencing them should be a priority — a simple case of “know your enemy.” In the aftermath of SARS, research on coronaviruses originating in bats has discovered more than 50 related viruses, some of which have the potential to infect people; this information can now be used to test for broad-action vaccines and drugs. Scaling up this effort to cover all viral families, as the Global Virome Project proposes to do, is a logical first step toward prevention.

A radical shift is also needed in the way that tests, vaccines and drugs are designed so that entire groups of pathogens are targeted instead of individual pathogens that are already known. The National Institute of Allergy and Infectious Diseases in the United States is working on a universal flu vaccine that would cover all known strains of influenza; a universal coronavirus vaccine, an Ebola-virus vaccine and others will also be needed.

With a smaller investment, we can also try to get ahead of pandemics by working with communities in hot spots of emerging diseases. Disease surveillance should be focused on farmers, rural communities and anyone who has extensive contact with wildlife, to look for unusual illnesses, test for novel pathogens and work with people to develop alternatives to high-risk activities such as the wildlife trade.

Pandemics are like terrorist attacks: We know roughly where they originate and what’s responsible for them, but we don’t know exactly when the next one will happen. They need to be handled the same way — by identifying all possible sources and dismantling those before the next pandemic strikes.

Peter Daszak is a disease ecologist and the president of EcoHealth Alliance, in New York.