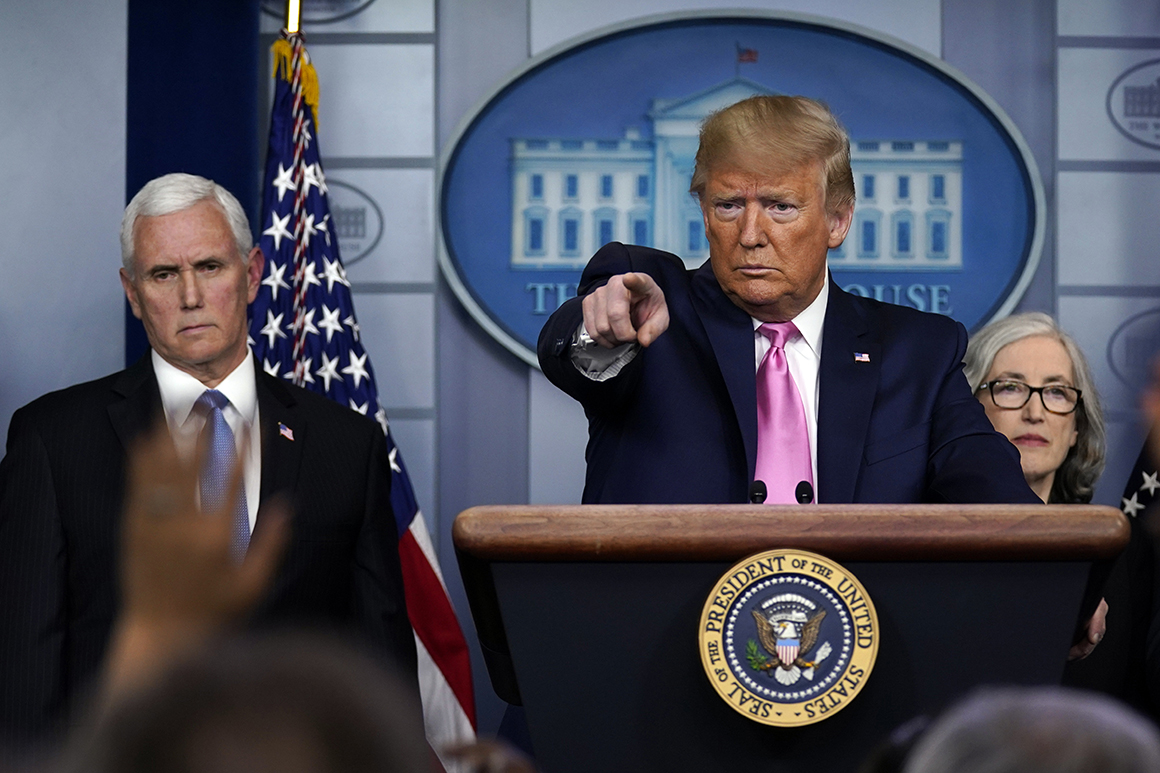 “We’re ready to adapt and do whatever we have to as the disease spreads, if it spreads,” Trump said, making only his second appearance in the briefing room during his time in office.

Growing fears about a potential health catastrophe are thrusting the Trump White House into a form of crisis management different from anything it has experienced in three years, pitting transparency against politics just as top officials hoped to be pivoting to the 2020 reelection fight and away from impeachment.

Now the White House is trying to project confidence about America’s ability to contain the coronavirus — now present in 37 countries, but about which much is still unknown — while appearing prepared for an outbreak in the U.S. It’s a tricky moment for any president to balance an image of both strength and caution, coming in a week when the administration’s political messaging has seemed disorganized and often in conflict.

In an effort to appear in control of the response, the president told aides on Air Force One during his return trip from India that he wanted to hold Wednesday night’s news conference. Secretary of Health and Human Services Alex Azar and other members of the coronavirus task force were expected to brief the president ahead of his appearance, which came hours after the stock market closed out another volatile day.

“President Trump realizes that people need to hear about the coronavirus from him,” said Jason Miller, senior communications adviser on the 2016 Trump campaign. “The media environment he is returning to is different than when he left for India.

“Even if the virus is not our fault, we will be the ones to solve the problem. That is the message the American people need to hear.”

Miller said Trump needs to be surrounded by officials from the Centers for Disease Control and Prevention conveying basic concepts like who is at risk of contracting coronavirus and how Americans can avoid it.

Trump’s decision to appear as the face of the coronavirus response comes after the president and White House officials were “livid” with the statements made Tuesday by Nancy Messonnier, director of the CDC’s National Center for Immunization and Respiratory Diseases. Her warning that a coronavirus outbreak in the United States is “not a question of if, but rather a question of when” raised alarms and contradicted public messaging from the White House that the situation is serious but under control.

On the same day, the director of the National Economic Council, Larry Kudlow, said on CNBC: “We have contained this, I won’t say airtight but pretty close to airtight.”

The White House tried to project a sense of confidence and pointed to the president’s early creation of a coronavirus task force, travel restrictions and a containment strategy.

But that was at odds with what federal officials have warned could be a dire situation — messaging seen as credible by many lawmakers but slammed by the president’s aides and allies.

“I don’t understand how the CDC could make an announcement as important as yesterday without it being tightly coordinated with the” White House, President George W. Bush’s press secretary, Ari Fleischer, tweeted. “There should have been an Oval Office meeting, a statement by POTUS about protecting people, and then a press avail by experts. Bizarre.”

With criticism over the messaging mounting on Wednesday, the White House sent out talking points to allies praising the president’s response as “aggressive and proactive.”

“The Administration is taking aggressive and proactive measures, working closely with state and local partners to protect the public health,” the document said. “President Trump has led the way in addressing the coronavirus and has allowed the U.S. to stay ahead of the outbreak as it has developed.”

Publicly, the president tried to show he had taken command and assured Americans they are safe.

“The risk to the American people remains very low,” he said. “We have the greatest experts really in the world.”

But behind the scenes, officials have prepared for scenarios in which the virus spreads out of control — especially in densely populated and poor areas abroad. It’s not known how many people are affected in Iran, but an unofficial report published by Canadian researchers was circulated among some officials inside the White House that predicted as many as 18,000 cases — a number seen as within the realm of possibility.

The National Security Council held a tabletop exercise last week in which officials went through potential scenarios and mapped out needs in the case of any spike in incidences.

An administration official also said the White House is considering measures that include restrictions for travel involving Korea and Italy. The CDC already raised its travel advisory for South Korea to the highest level, recommending travelers avoid all nonessential travel, but Italy still remains at the level below.

Trump on Wednesday took credit for an early decision to ban certain travelers from China shortly after the virus outbreak was reported.

“A lot of people thought we shouldn’t have done it that early,” he said.

Senior administration officials have stressed in recent days that the president’s decision early on to shut down flights between the U.S. and China gave the administration much-needed time to ramp up vaccine development, explore potential treatments and examine possible disruptions to supply chains for U.S. companies.

“Unfortunately what we are seeing is a political effort by the Left and some in the media to distract and disturb the American people with fearful rhetoric and palace intrigue,” White House spokesman Judd Deere said in a statement. “The virus remains low-risk domestically because of the containment actions taken by this Administration since the first of the year.”

“The global situation is serious and changing hourly, which is exactly why Secretary Azar continues to lead a whole-of-government response in partnership with state and local leaders that includes the best experts on infectious diseases,” Deere said. “It’s also exactly why the White House is requesting from Congress $2.5 billion in funding to accelerate vaccine development and further support preparedness and response efforts. The President is receiving regular updates, and is prepared to take additional action to protect the American people.”

White House aides have long wanted the public message on the coronavirus to delve into the public health concerns rather than the potential economic damage. But behind the scenes, aides have been running models of the possible impact on both the U.S. and global economies. The U.S. stock market plunged on Monday and Tuesday after reports that the coronavirus had spread to both Italy and Iran. The Dow Jones Industrial Average then was highly volatile in Wednesday trading.

New analysis released by Moody’s Analytics chief economist Mark Zandi estimated the odds of the coronavirus turning into a pandemic is now at 40 percent — a development that Zandi said would result in a recession in the U.S. for the first half of 2020.

“The coronavirus has been a body blow to the Chinese economy, which now threatens to take out the entire global economy,” he wrote in a research note. “A global recession is likely if COVID-19 becomes a pandemic, and the odds of that are uncomfortably high.”

The White House is also trying to work with leaders at the state level on a possible coronavirus response.

“There are nuances of the messaging that may lead some to believe we’re saying something different,” said Michael Kilkenny, medical director for the Cabell-Huntington Health Department in Huntington, W.Va. “But we all have the same understanding that this is a serious threat to the public health of the U.S. and that when we talk about a disease that has the potential to spread asymptomatically, the reality is you cannot stop community spread.”

Kilkenny and other state and local health leaders met with administration officials including acting chief of staff Mick Mulvaney at the White House on Tuesday to discuss preparedness efforts for the coronavirus. He said he agreed with the CDC assessment that community spread is likely.

“That’s the prudent concept to grasp and we’re grasping that at the local levels across the country,” Kilkenny said. “To deny that would happen here would be foolish.”

Brianna Ehley contributed to this report.