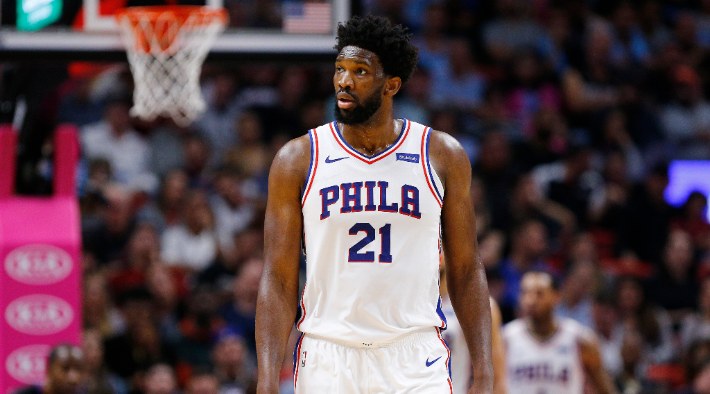 The Philadelphia 76ers have not had the season they’ve hoped for, and as they enter the stretch run they are dealing with the added concern of the health of All-Star point guard Ben Simmons. Simmons is out for at least two weeks with a “nerve impingement” in his back, with the expectation that he will miss fairly significant time.

In the meantime, the Sixers figured to lean heavily on Joel Embiid to take on a larger role both as a scorer and playmaker, and he did so with aplomb against the Hawks earlier this week, scoring a career-high 49 points. Against Cleveland on Wednesday, the Sixers got off to a slow start that got worse when Embiid was forced to go to the locker room with an apparent left shoulder injury, after a collision with Ante Zizic under the basket.

Embiid would shoot his free throws but then get pulled out of the game and walk to the locker room, clearly in pain with Sixers fans holding their breath.

He would return to the bench, but was still looking to be in some discomfort and eventually returned to the locker room. The team officially listed him as out with a left shoulder sprain, with an update on a timetable for his recovery likely coming after further testing is done.

If there is good news, there was some concern he had injured his collarbone and this would seem to indicate that was not the case, but it’s still an unfortunate injury, and we’ll have to wait for a full diagnosis and timetable. Embiid missed time earlier in the season after having surgery to repair a torn ligament in his left finger, and now must battle back from this injury. The Sixers, meanwhile, will have to now play without their two best players and weather the storm as they continue to jockey for playoff seeding in the East.