Americans hold onto their cars for approximately 12 years and this means they rack up hundreds of thousands of miles.

iSeeCar’s latest study looked into this as they analyzed over 15.8 million vehicles to identify which models had the highest percentage to reach 200,000 miles (321,869 km).

Somewhat unsurprisingly, the list was dominated by large SUVs. The Toyota Land Cruiser came out on top as 15.7% of them have traveled more than 200,000 miles (321,869 km). That’s a pretty a high percentage, but it’s important to remember the Land Cruiser sells in small numbers – just 3,536 units in the United States last year – and that could skew the results a bit.

The remaining four models with the highest percentage to hit the 200,000 (321,869 km) mile mark were the Toyota Sequoia (9.2%), Ford Expedition (5.2%) and Chevrolet Suburban (4.9%). The only crossover to break into the top five was the Toyota Highlander Hybrid at 4.2%. Those are all significantly higher than the average of 1%. 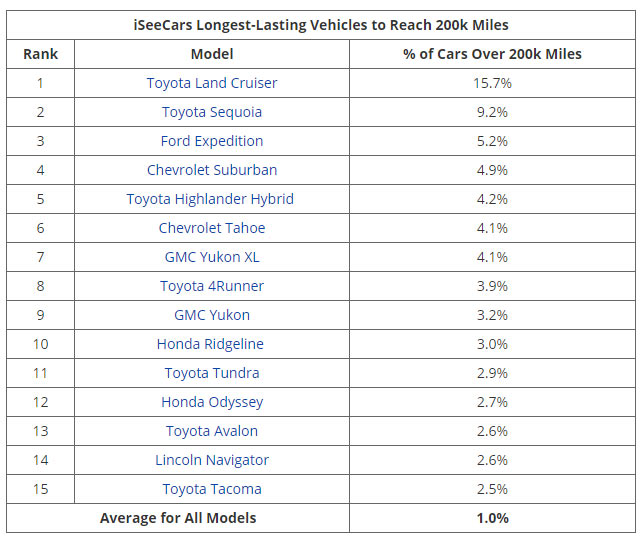 Sticking with the crossover and SUV theme, 3.9% of Toyota 4Runners have over 200,000 (321,869 km) miles on them and this earns the vehicle the title as the “longest-lasting” midsize SUV. Likewise, the Honda CR-V won the honor in the small SUV / crossover segment with 1.1%.

The study also looked at sports cars and electric vehicles. However, since these vehicles tend to be driven less, they made some changes to the criteria.

The threshold for EVs was even lower at 100,000 miles (160,934 km). Considering the Tesla Model S was one of the first electric vehicles to offer good range and performance, it should come as little surprise that it’s the winner here at 2.3%.