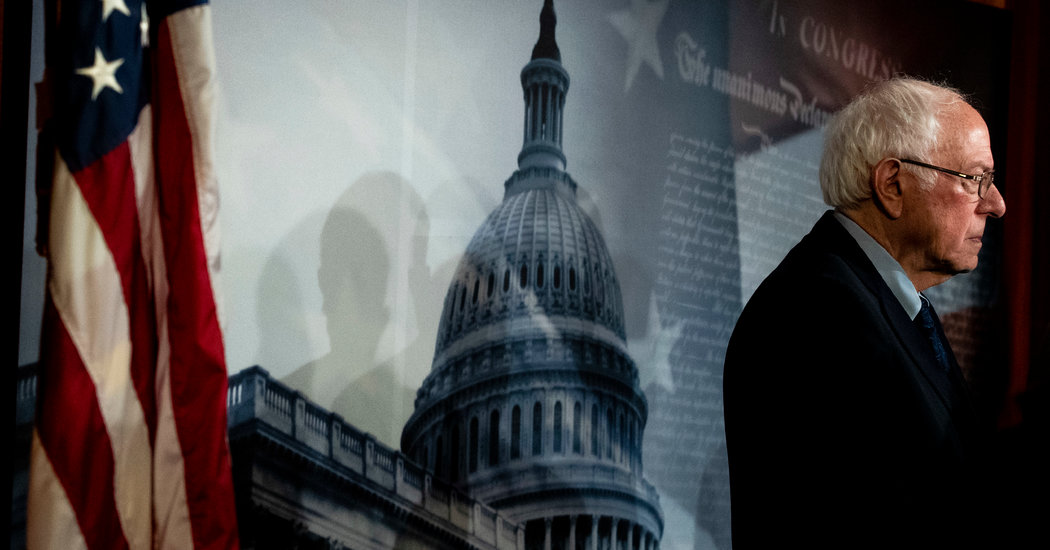 Of the 46 Democratic representatives who hold districts classified by Sabato’s Crystal Ball House ratings as at least marginally competitive, not one has endorsed Mr. Sanders, the Vermont senator who won a decisive victory in the Nevada caucus over the weekend.

Some have actually gone further, actively distancing themselves from Mr. Sanders. Anthony Brindisi of upstate New York said he would not support him. Joe Cunningham of Charleston, S.C., said of the senator, “South Carolinians don’t want socialism.” Mr. Brindisi and Mr. Cunningham both won in 2018 in districts that backed Donald Trump by double digits in 2016.

A recent report in The New York Times summed up these fears: Mr. Sanders’s “rise is generating fears among centrist Democrats that the apparent leftward shift of their party could cost them not only a chance to retake the White House, but also their hold on the majority in the House of Representatives.”

You can believe that these fears are overstated, but it’s not difficult to understand their theoretical basis. Mr. Sanders is an avowedly left-wing candidate proposing radical change at a time when polling suggests perceptions of the economy are generally favorable. Some Democrats fear that faced with the choice between four more years of Mr. Trump versus a hard-left alternative, voters would not just re-elect Mr. Trump, but they would also hand his party complete control of Congress.

Mr. Sanders’s weaknesses as a general election candidate are, at the moment, more theoretical than real. He generally leads Mr. Trump in national horse race polling, and his lead isn’t much different than that of Joe Biden, the man he has replaced as the front-runner for the nomination: In the RealClearPolitics averages of national polls, both Mr. Biden and Mr. Sanders lead Mr. Trump by a little over four points.

But let’s assume that Democratic worries about Mr. Sanders are correct, and that he wins the nomination and loses to Mr. Trump. Would he cost Democrats the House, too?

In order to win the House majority, Republicans would have to win roughly 20 currently Democratic seats. Democrats hold 30 districts that Mr. Trump carried in 2016. A highly nationalized House vote in which both the president beats Mr. Sanders and Republicans successfully yoke the Vermont senator to House Democrats could produce a Republican House. A broader trend in American politics is that presidential and House outcomes are more in alignment now than they were a generation or two ago. For instance, the 1976 and 2016 presidential elections were both fiercely contested races in which the national popular vote margin was just two points. In the 1976 election, 124 of 435 districts voted differently for president and House; in the latter, just 35 did.

But that broad-brush statistic obscures the amount of ticket splitting that can and does still occur. You don’t have to go back far to find examples: 2016 will suffice.

Democrats would go on to win 20 of those 37 seats in the 2018 midterm. Why such a backlash? Perhaps because some of these ticket splitters didn’t get the outcome they expected in 2016.

The political scientist Robert Erikson has found that in post-World War II presidential elections, some voters may split their tickets against the party they believe will win the White House as a way to put a check on the likely winner, as opposed to waiting for the midterm two years later, when the president’s party customarily struggles. The public, along with analysts and betting markets, all saw Mrs. Clinton as a favorite in 2016. “Plausibly, many who thought Hillary Clinton would win voted Republican for Congress to block, thus accounting for the Democrats’ surprisingly feeble performance at the congressional level in 2016,” Mr. Erikson wrote in the lead-up to the 2018 election.

Analysts generally do not see either party as strongly favored to win the presidency this fall, but the public seems to differ. A recent Monmouth University poll showed that two-thirds of American voters think the president definitely or probably will win. A Sanders nomination might make the public even likelier to view Mr. Trump as a favorite; Democrats, already pessimistic, are starting to hear skepticism from their own leaders about Mr. Sanders’s chances. Oddsmakers have also recently made Mr. Trump a more significant favorite.

A consequence of Mr. Trump’s chronically low approval ratings is that even if Americans ultimately decide he’s the lesser of two evils this fall, there may be some voters who back him only tepidly or anticipate his victory and don’t want his party to have total control of the government. Mr. Sanders being a potentially weak opponent doesn’t necessarily make the president a beloved incumbent.

That may work to the benefit of House Democrats, even as they now panic — rightly or wrongly — over the possibility of sharing the ballot with Mr. Sanders.

Kyle Kondik, the managing editor of Sabato’s Crystal Ball, is the author of the forthcoming book “The Long Red Thread.”