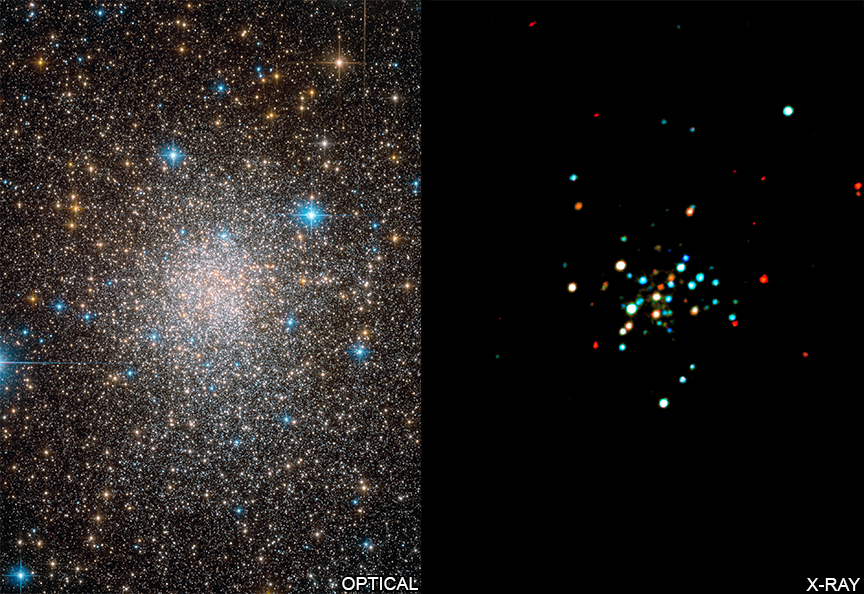 A volatile double star system appears to change its behavior rapidly and unpredictably like a cosmic story of Dr. Jekyll and Mr. Hyde.

This stellar duo, known as Terzan 5 CX1, lies roughly 19,000 light-years from Earth in a dense collection of stars, or globular cluster, called Terzan 5. The pair consists of a neutron star — an extremely dense remnant of a supernova explosion — and a smaller, sunlike star.

Data collected from more than a decade of observations show that the neutron star closely orbits its lower-mass stellar companion. The heavier neutron star pulls material from its partner into a surrounding accretion disk, which emits bright X-ray light detected by Chandra.

At this stage, the stellar duo is referred to as a low-mass X-ray binary. However, as orbiting material in the accretion disk spirals toward the neutron star, it rotates faster and transforms into what is known as a millisecond pulsar star, which emits pulses of radio waves detected by the VLA. After a few years, the stellar duo appears to return to its original state.

“The neutron star can spin faster and faster until the roughly 10-mile-wide sphere, packed with more mass than the sun, is rotating hundreds of times per second,” NASA officials said in a statement. “Eventually, the transfer of matter slows down and the remaining material is swept away by the whirling magnetic field of the neutron star, which becomes a millisecond pulsar.”

The data revealed that the stars’ behavior changed over the course of only a couple years. Chandra observations from 2003 captured bright X-ray emissions, indicating that Terzan 5 CX1 was behaving like a low-mass X-ray binary.

However, Chandra data taken from 2009 to 2014 show that Terzan 5 CX1 was 10 times fainter in X-rays. Meanwhile, the VLA also recorded radio waves from Terzan 5 CX1 in 2012 and 2014, suggesting the stellar duo transformed into a millisecond pulsar and was blowing material out into space.

When Chandra observed Terzan 5 CX1 again in 2016, the stars had already returned to behaving like a low-mass X-ray binary, emitting brighter X-rays. This type of behavior is rarely seen in binary star systems. Typically it takes several billion years for a low-mass X-ray binary to evolve into a millisecond pulsar, according to the statement.

Additional observations using both the Chandra X-ray Observatory and VLA are needed to confirm the pattern of “Jekyll and Hyde” behavior exhibited by Terzan 5 CX1. Studying this binary system provides insight on identity-changing stars, as only three have been identified to date.