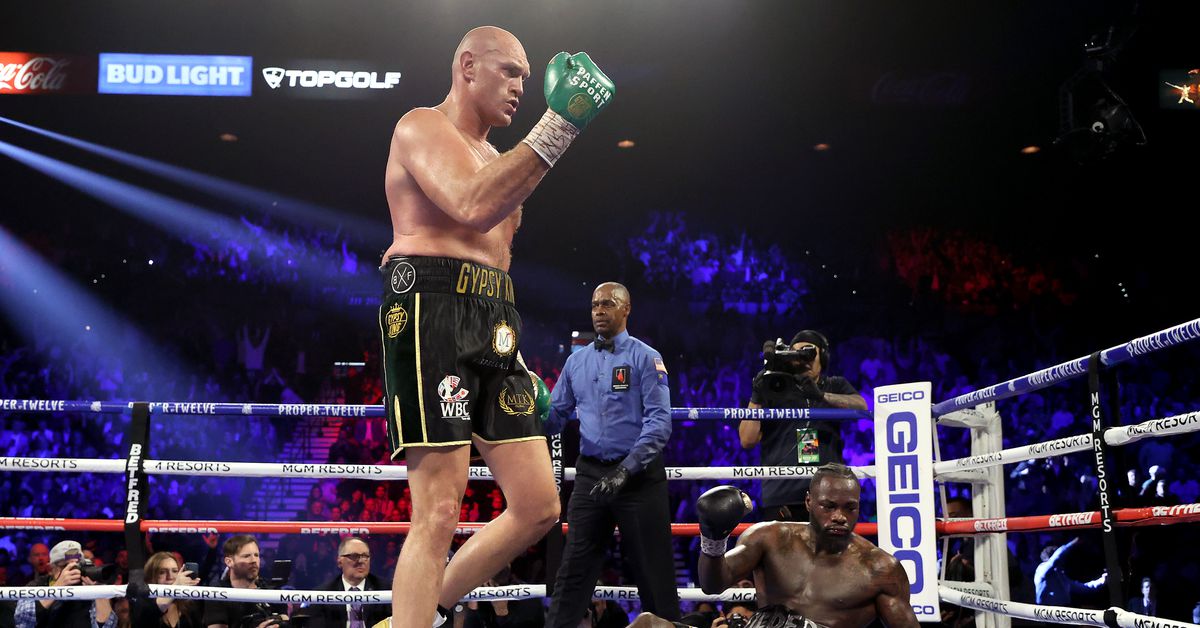 The lore of Tyson Fury began long ago.

There was his premature birth and skyscraper height, his post-fight singalongs, his out-sized personality and ring flair, his many, many victories. But the night he truly became a legend came in Las Vegas on Feb. 22, 2020, on a night he was supposed to lose. He had been knocked down twice in the first fight with Deontay Wilder and was the underdog in the rematch. He came in 16.5 pounds heavier than the first time around. He switched trainers just seven weeks before this fight. He sustained a cut that was slow to heal and threatened to open at the touch of Wilder’s power. He declared that he would change his defensive style to put himself in harm’s way in pursuit of a knockout.

As it turns out, all the problems and risks and issues were just a setup for another incredible resurrection. This is a man who battled severe depression and turned his life around. Who ballooned to 400 pounds and somehow returned to professional athletics. Who took Wilder’s best shots, crashed to the canvas and somehow rose again.

And here, in the biggest heavyweight fight boxing had seen in over 20 years, Fury rose up again, fulfilling his prophecy and installing the “Gypsy King” as the heavyweight king.

The last time boxing heavyweights had drawn such interest was when Mike Tyson—who Fury was named after—met Evander Holyfield for the first time. Tyson was the Wilder of the day, a ferocious knockout artist who was always expected to end things with a bang. As we all know, that never happened. Instead, Holyfield pushed and clinched and led most of the offensive exchanges. In short, he bullied the bully.

Fury took the same path on Saturday night at the MGM Grand Garden Arena – the same venue in which Holyfield beat Tyson in 1997. He never let Wilder get started. From the opening seconds of the bout, he was the one advancing, clinching, throwing the first punches. By the time Fury scored a knockdown with a right hand behind the ear late in the third round, it was clear he was in complete command.

Wilder simply could not adjust. He brought with him the threat of that world-changing power that all of his previous opponents had experienced, but he could never unleash it in any meaningful way. Too often, he was backing up or tied up, either too defensive or stuck in neutral. At best, he could only get off a stiff jab from time to time.

It was a remarkable strategic transition for Fury, who dejectedly left the first fight with a draw in a match in which he out-boxed Wilder for most of the fight. On that night, it was two knockdowns suffered at Wilder’s hands that cut the gap between them to nothing. Fury could have focused on shoring up his defense even further to avoid the big shots, but instead, he took a completely different and far riskier approach.

Fury announced his plans even prior to the match, saying he would get more aggressive to win by knockout. In many instances when a fighter publicly announces a fundamental shift to their strategy, they’re posturing. Wilder himself mocked the idea, saying Fury has “pillow fists” and that his two-year-old hits harder than Fury, who never truly hurt Wilder the first time around.

Even at his massive size—he’s 6-foot-9 and weighed in at 273—Fury has never been known as a knockout artist. But through his new approach, he was dangerous from the beginning. Wilder had only been on the canvas once in 43 fights before Saturday night. Against Fury, he was knocked down twice.

“I’ve never been the type of boxer to sit down on my punches,” Fury said in the post-fight press conference. “I’ve always been a slick, stick-and-move kind of boxer. But I did it for a reason. People said this was a bad move, but it worked out for the best. I knew we’d get it right on the night and we did.”

It took incredible courage to execute, and he did it flawlessly. Wilder never hurt him, barely even threatened him. For Fury, it was a coronation. In a match that broke the Nevada gate record for a heavyweight championship—the fight drew over $17 million—Fury became a superstar, not quite on par with his namesake, but given his massive personality and still undefeated record, maybe he’s on the way.

In fact, he’s now the biggest name in a division that has seen an unlikely resurgence, and is now as healthy as it’s been since it could line up Tyson and Holyfield.

Wilder lost for the first time, but came across as a warrior in refusing to surrender even though he was hurt so early and often. His corner stopped the fight before he ever would. But there’s Anthony Joshua, who will hopefully be next for Fury. There’s Andy Ruiz and Joseph Parker and Alexander Povetkin. There’s ex-title challengers like Luis Ortiz, contenders like Dillian Whyte, Michael Hunter and Adam Kownacki, and new arrivals like Oleksandr Usyk.

And at the top, a Gypsy King.

It was an awesome evolution and a spectacular result, his slippery defensive skills now complemented by brutal power. Fury has said he may only fight two more times and retire, and right now, that would seem like a shame, though it makes sense that the man who can regenerate himself at will may disappear the same way.