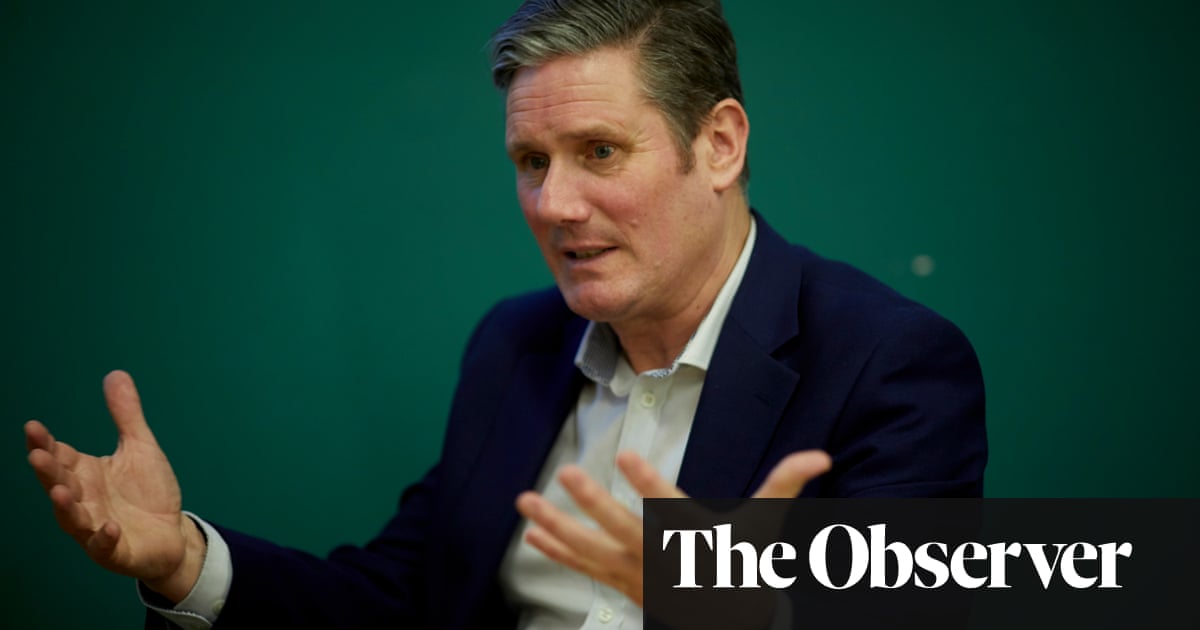 Labour will lock itself out of power for an entire generation if it fails to end years of internal warring and instead target “dangerous” Tory prime minister Boris Johnson, Keir Starmer warned the party today.

Keir Starmer: ‘We can blame each other and argue – or pull together and win’

With voting about to begin in the race to replace Jeremy Corbyn as Labour leader, Starmer said the party would experience its longest period out of power since the second world war should it continue to focus on “internal disagreements” rather than confronting the prime minister.

In an interview with the Observer, the frontrunner for the Labour leadership suggested that the party had previously failed to expose Johnson, stating it was wrong to “caricature him as a clown”. In his strongest personal attack to date, he warned Johnson was “a dangerous man” and “without principles”. He also confronted Labour’s membership over infighting.

Starmer said: “My message to our members is essentially that they’ve got a choice – we as a party can mope around, head in hands, arguing with each other, pointing fingers about who’s to blame for this, that and the other. Or we could decide the next four years of our history is for us – we can pull together and shape what happens next.

“Everybody’s trying to find the reason we lost the election we just had, but we’ve lost four in a row, and we face another few years of this,” he said. “If we lose the next one, it’s a generation that will have not had the protection and benefit of a Labour government.”

He added: “This is a choice we’ve got to make – a conscious choice for half a million members. Do you want to make history, pull together and change? If the answer to that is ‘yes’, then let’s do it. Because if not, we’re going to lose.”

His intervention comes as the race enters a crucial week. Ballots go out on Monday and a significant amount of the electorate is expected to cast its vote this week. Rebecca Long-Bailey used a hustings in Peterborough on Saturday to argue that a council-house building programme would lay the foundations for “aspirational socialism”. Lisa Nandy took aim at credit-scoring agencies, accusing them of increasing the costs of being poor.

Starmer has amassed a clear lead over Long-Bailey and Nandy in terms of endorsements from constituency Labour parties. Many of the local parties backing him had previously supported Corbyn in 2015 or 2016, suggesting he is picking up support from Labour’s large left wing. However, he has faced criticisms over a cautious approach that has seen him sign up to many of the measures drawn up under Corbyn’s leadership – a move designed to shore up support from the party’s large left flank.

Asked if he would be willing to take decisions unpopular with the party membership, he said: “Of course there have got to be difficult decisions. I’m not going to shy away from those difficult decisions, and we’ll confront each of them as they arise. But I reject the idea that it’s either unity or victory. I don’t think there’s any victory without unity, or victory without values.

“But if we carry on divided, taking lumps out of each other, asking the question ‘which part of the party are you from’, not ‘what are you saying’, then we’ll lose the next general election.”

Starmer said that his priority now was focusing on Johnson and his administration. “I think that we need to be absolutely clear about how dangerous he is and how ruthless he is, and we have to be exposing him relentlessly,” he said. “I’m not sure we did that as well as we should have done.

“That’s what members now need to see from the leadership contenders. Are you focused on Boris Johnson and going out to attack him, rather than what your position is on various internal disagreements?”

Starmer said he was planning to create a dedicated “attack and rebuttal” unit within the party’s media team, as part of party restructuring designed to improve Labour’s fightback against the Tory administration. He also plans to widen decision-making away from a small team around the leader, although he did not spell out a formal process to do this. He confirmed that he supported the idea of retaining free movement of people from the European Union, despite the role of immigration in the Brexit debate. He said that the new system proposed by the government, which threatens to end immigration for those in low-paid jobs, was wrong in suggesting “how much you earn is a measure of your value”.

In an apparent criticism of the association of Corbyn’s closest allies with the factional infighting that has dominated the party, he said: “If we are to unite as a party, it is essential that the leader of the party models unity in everything he or she does – that nobody has the right to call on other people to be united if we don’t model it ourselves.”