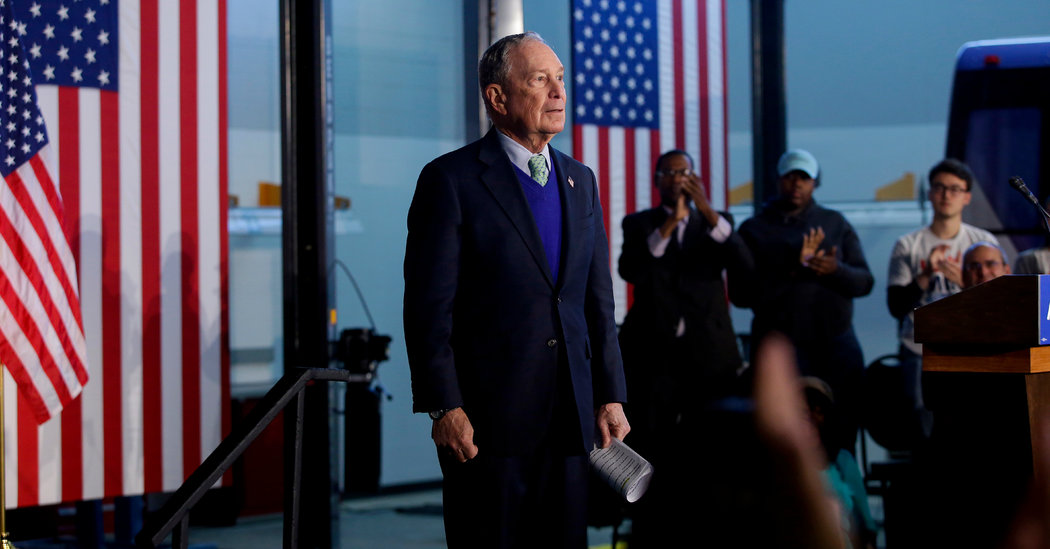 For months, he has muscled into the Democratic primary with all the glossy ubiquity money can buy — the benevolent billionaire, in his ads’ telling: dynamic, inspirational, liberal where it counts.

But as Michael R. Bloomberg prepares to make his debate-stage debut on Wednesday, in a televised forum for which his campaign does not have final editing rights, the selling of Bloomberg 2020 will be forced to confront its greatest narrative complication yet: Mr. Bloomberg, circa 2020.

After a mass introduction to the Democratic electorate on his terms, powered by hundreds of millions of dollars of his own money, Mr. Bloomberg is submitting for the first time to an uncontrolled setting on a national scale. This does not necessarily play to his strengths.

Here is a headstrong 78-year-old billionaire known to blunder at times under even gentle media questioning. He will join five rivals in Las Vegas eager to flame his record of check-writing and party-switching. They will be drawing on a trove of recent news reporting and opposition research detailing Mr. Bloomberg’s history of demeaning comments about women and less-than-progressive views about race and policing, among other vulnerabilities.

Mr. Bloomberg, the former Republican-turned-independent New York mayor, has not debated since 2009, as allies are quick to mention in tempering expectations. And the one-on-one sessions of his local elections were hardly preparation for a 2020 field of well-practiced competitors who see Mr. Bloomberg as an urgent political threat amid his rise in recent state and national polls. (A Monmouth University survey of Virginia this week placed him in a tie for first. A national poll from NPR, PBS NewsHour and Marist on Tuesday morning showed him at 19 percent among Democrats and Democratic-leaning independents, good for second place behind Senator Bernie Sanders and officially qualifying Mr. Bloomberg for the Las Vegas stage.)

Perhaps most conspicuously, the debate on Wednesday will temporarily separate Mr. Bloomberg from the most powerful asset of his campaign: his campaign.

He has the most extensive state-by-state operation in the field, with staff often earning the highest salaries by far and organizing events with the best hors d’oeuvres — his candidacy at once a live-action testament to his managerial command and a signal to President Trump and to Democratic voters that the weight of his fortune is not to be underestimated.

But candidates are not permitted to haul field organizers or canapés or record-reframing ad campaigns onstage with them.

“He will be up there all alone,” said Melissa Mark-Viverito, a former speaker of the New York City Council and current candidate for a House seat in the Bronx, who often criticized Mr. Bloomberg’s City Hall as a progressive Democratic councilwoman. “And he has a lot of explaining to do.”

Mr. Bloomberg’s team is plainly mindful of the risks. Beyond the candidate’s own potential shortcomings off the cuff, he presents as a near-perfect foil for several others in the race. Mr. Sanders and Senator Elizabeth Warren have in recent days cast Mr. Bloomberg as the imperious emblem of runaway plutocracy. Pete Buttigieg, the former mayor of South Bend, Ind., and Senator Amy Klobuchar are expected to talk up their status as Midwestern underdogs, taking on a come-lately Democrat from the big city.

Former Vice President Joseph R. Biden Jr., the fading former front-runner whose stumbles helped persuade Mr. Bloomberg to run in the first place, has been pressing Mr. Bloomberg on his longstanding support for stop-and-frisk policing, an attack that Mr. Biden hopes will resonate with the black voters who remain at the core of his support base. Mr. Biden has watched Mr. Bloomberg stuff the airwaves with ads implying a chummy partnership with former President Barack Obama, with whom Mr. Bloomberg was never particularly close.

Until recently, the Bloomberg campaign had been content to run in a kind of parallel primary, rarely engaging with fellow Democrats, effectively treating the February slate as a kind of qualifying tournament for the rest of the field, its winner empowered to take on Mr. Bloomberg in the main bracket. Mr. Bloomberg is not competing in the first four nominating contests, turning instead to the delegate-rich states that vote in March or later.

But after the Democratic National Committee changed its rules to facilitate Mr. Bloomberg’s inclusion — past debates have required candidates to meet certain individual donor benchmarks, and Mr. Bloomberg is not raising money from others — aides recognized that he had little choice but to participate if he qualified.

This week, the campaign has tangled most visibly with Mr. Sanders, accusing the senator of condoning a culture of vitriol among supporters. Few other attack lines have been telegraphed ahead of Wednesday night.

Mr. Bloomberg himself has been holed up in debate preparations, joining advisers for mock sessions in a rented warehouse-style space outside Manhattan, snacking on matzo with peanut butter during breaks from his aides’ play-acted swipes at his record.

Howard Wolfson, a top adviser, said that Mr. Bloomberg had watched “some” of the past Democratic debates for reference but that his own debate experience from past mayoral campaigns had not been particularly instructive. “It’s different if you’re an incumbent. It’s different if you’re debating one other person,” Mr. Wolfson said.

Since leaving office, Mr. Bloomberg has become better known to many audiences for his philanthropic pursuits around gun safety and environmental issues.

Certainly, Mr. Bloomberg has never debated anyone quite like Mr. Sanders, whose allies consider Mr. Bloomberg’s very biography an affront to people-powered democracy. Mr. Wolfson has been playing Mr. Sanders in the mock forums, taking inspiration in part from the curmudgeonly Muppets characters Statler and Waldorf, he said. The impression has occasionally moved Mr. Bloomberg to fits of momentum-breaking laughter during their practices, according to an aide.

Asked if Mr. Bloomberg was rusty after so many years out of office, Mr. Wolfson did not say no. “We’ll find out Wednesday,” he said.

Even supporters would not describe Mr. Bloomberg as a rousing public speaker. His address endorsing Hillary Clinton at the 2016 Democratic National Convention, part of her effort to highlight support from moderates and disaffected Republicans, is best remembered for his minimalist plea to elect “a sane, competent person” as president.

He is prone more often to groaners than zingers. Alluding to Mr. Sanders once last month, Mr. Bloomberg called himself the only Jewish candidate “who doesn’t want to turn America into a kibbutz.”

And when challenged by journalists, Mr. Bloomberg can quickly become defensive. Shortly after he announced his bid, a television interview on “CBS This Morning” produced an arresting volume of notable remarks. Among them: the suggestion that other candidates “had a chance to go out and make a lot of money” to pour into their own campaigns, so they should not begrudge him for having done so; and the assertion that “nobody asked” about Mr. Bloomberg’s defense of stop-and-frisk policing until he apologized for the strategy in November. (Many, many people had asked — and sued, and protested — throughout his time as mayor, and he defended the approach as recently as last year.)

Veterans of Mr. Bloomberg’s City Hall runs say that for any missteps he might have had in front of the cameras, few came during debates.

“He wasn’t really ever trying to knock anybody out,” said Edward Skyler, a 2001 campaign aide who became one of Mr. Bloomberg’s deputy mayors. “He could absorb a hit and move on. Somebody would go on the attack and he’d just be like, ‘OK.’”

Given the scope of Mr. Bloomberg’s resources, a merely serviceable debate performance would probably be treated as a victory. Some candidates rely on the debates for media oxygen and fund-raising, seeking breakthroughs like Ms. Klobuchar managed in New Hampshire, where an energetic performance helped vault her to a surprise third-place finish.

Mr. Bloomberg can reach the masses with or without a live audience and a gathering of lecterns.

“He has basically been communicating a pure message with no filter, the equivalent of an IV,” said Lily Adams, the former communications director for the presidential campaign of Senator Kamala Harris. “He’s got a baseline-level brand that he has just spent almost half a billion dollars communicating with the public.”

And so, Mr. Bloomberg has proceeded as a kind of mystery-box candidate, hosting some well-attended events in states across the country but asking most Democrats to consider his merits without ever getting a look up close.

Aides have trumpeted his voter interactions in these jet-and-dash state visits, reporting a “groundswell of support” nationwide. But even for a politician with a stated preference for data over anecdote, the approach has left him lagging the field in spontaneous conversations with his fellow Americans.

Gale Brewer, the Manhattan borough president, who dealt extensively with Mr. Bloomberg’s administration in her previous role as a city councilwoman, suggested that the former mayor was missing out on something if he de-emphasized the hugs-and-handshakes portion of a campaign.

Rivals often recount moments from the trail to advance their arguments from the stage. Mr. Bloomberg will have fewer to choose from.

“On the debate stage, if you haven’t been out talking to people like the other candidates and you haven’t picked up all the nuances that people bring to your attention — having those little stories means something,” Ms. Brewer said. “If you have that kind of money, you don’t have to go out and touch people in the same way.”