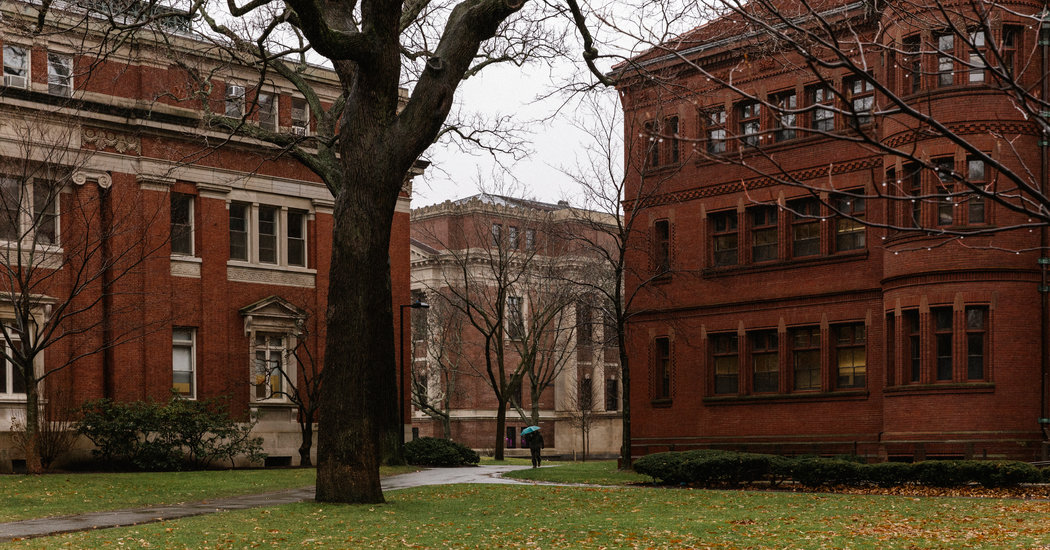 A group that opposes affirmative action filed an appeal Tuesday of a federal ruling that Harvard had not intentionally discriminated against Asian-American applicants, ratcheting up a challenge to decades of Supreme Court decisions upholding race-conscious selection in college admissions.

The appeal comes four and a half months after federal Judge Allison Burroughs ruled that although Harvard’s admissions system was “not perfect,” it nonetheless met the legal standard needed to ensure that it was not motivated by racial prejudice or stereotyping.

In their appeal, however, the plaintiffs, Students for Fair Admissions, representing a group of Asian-American students rejected by Harvard, seized on the judge’s own critiques of Harvard’s admissions process to argue that she had too easily given the school the benefit of the doubt.

They noted that in her decision, Judge Burroughs said that the analysis presented by the plaintiffs, which they said showed bias against Asian-American applicants, could be used to show possible “implicit” or unconscious bias in the system.

But while the judge said she would “not dismantle a very fine admissions program that passes constitutional muster, solely because it could do better,” the plaintiffs urged the appeals court to do so. They interpreted the judge’s willingness to concede uncertainty on some of the points as evidence that there was ample room for a higher court to contest the ruling.

“At every critical juncture,” the court “gave Harvard the benefit of the doubt — and it still could not confidently find that Harvard treats Asian Americans fairly,” the brief, filed Tuesday in the U.S. Court of Appeals for the First Circuit in Massachusetts, said. Legal experts said the appeals court is required to take the case and will likely hear oral arguments, moving the final decision in the case one step closer to the Supreme Court.

Students for Fair Admissions includes more than a dozen Asian-American students who applied to Harvard and were rejected. They contend in their lawsuit that Harvard systematically discriminates against Asian-American applicants in violation of federal civil rights law, by penalizing their high achievement as a group, while giving preferences to other racial and ethnic minorities. They say that Harvard’s admission process amounts to an illegal quota system.

Harvard says its admissions system is finely calibrated to produce a spectrum of diversity, not only of race, but of income, ideas, geographic origin and talents. The group’s appellate filing “further exposes their ultimate goal of removing the consideration of race in college and university admissions,” Harvard said in a statement Tuesday.

Derek W. Black, a constitutional law professor at the University of South Carolina, said Tuesday that the appeal was “grasping at straws to a certain extent.”

“Two people could look at the same facts and arrive at different conclusions,” he said. “That’s the judge’s call to make.”

The group initially filed the case against Harvard in 2014, and spent years in an ultimately successful battle to get access to tens of thousands of pages of internal Harvard admissions records, many of which were made public.

The three-week trial, which took place in the fall of 2018, riveted spectators because of the arcane secrets of Harvard admissions that it revealed. There was the existence of a “dean’s or director’s list” that included the children of wealthy donors who received special consideration in admissions. And there was the “lop list,” a list of students whom admissions officers felt could be cut at the last minute, to balance the composition of the class the way they wanted to.

“A defendant’s insistence that it does not discriminate, however credible or indignant, is not evidence in its favor,” the brief says.

Students for Fair Admissions has filed another affirmative action case against the University of North Carolina at Chapel Hill, which is scheduled to go to trial in May. It is a more classic case, arguing that the university could bring in more black and Hispanic students, albeit of slightly lower academic caliber, if it used race-neutral alternatives.

The plaintiffs in the Harvard case received support from the Trump administration, which argued for the release of the school’s admissions documents, and which has opened a parallel discrimination investigation based on a 2015 complaint to the Justice Department by a coalition of Asian-American organizations.

The leader of Students for Fair Admissions and the architect of the case against Harvard is Edward Blum, a longtime crusader against affirmative action who has raised millions of dollars from conservative groups to challenge voting rights laws and affirmative action policies, often successfully.

Harvard has received support from other Ivy League schools, which use similar admissions systems, which could also be threatened if the plaintiffs were to win in the Supreme Court.