In that 2005 post, I included a graph of household mortgage debt as a percent of GDP. Several readers asked if I could update the graph.

The following chart shows household mortgage debt as a % of GDP. Although mortgage debt has been increasing for years, the last four years have seen a tremendous increase in debt. Last year alone mortgage debt increased close to $800 Billion – almost 7% of GDP. … 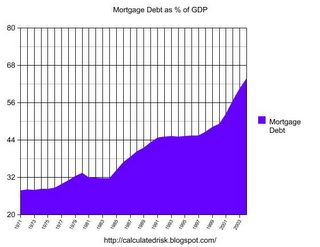 Many homeowners have refinanced their homes, in essence using their homes as an ATM.

It wouldn’t take a RE bust to impact the general economy. Just a slowdown in both volume (to impact employment) and in prices (to slow down borrowing) might push the general economy into recession. An actual bust, especially with all of the extensive sub-prime lending, might cause a serious problem.

CR Note: And a serious problem is what happened! 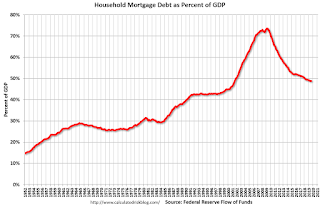 The second graph shows household mortgage debt as a percent of GDP through Q3 2019.   Hopefully the graphs have improved!

The “bubble” is pretty obvious on this graph, and the sharp increase in mortgage debt was one of the warning signs.