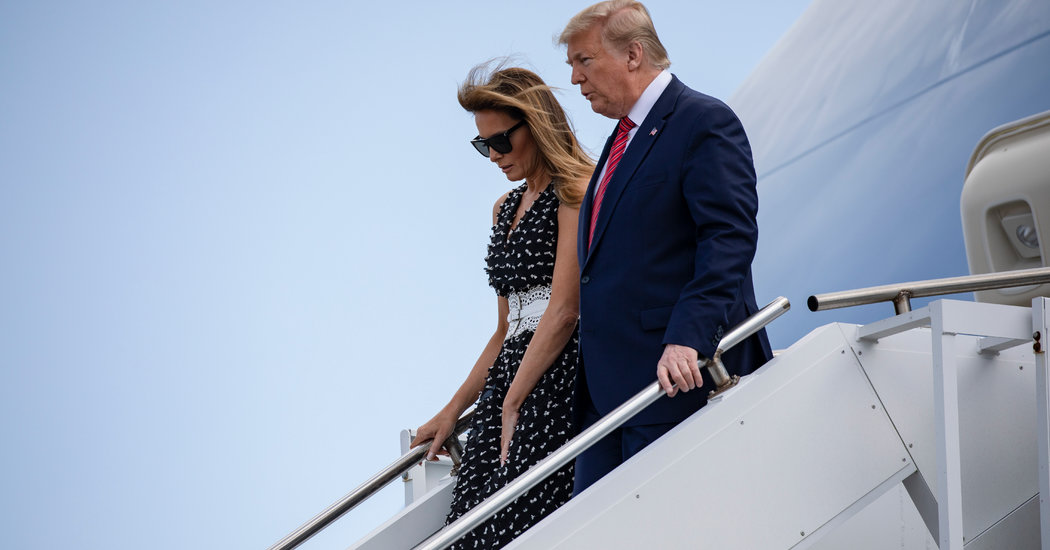 DAYTONA BEACH, Fla. — President Trump put his showmanship skills on full display on Sunday at the Daytona International Speedway, leading the famous stock car drivers in a lap around the 2.5-mile racetrack. A sold-out crowd of 101,500 people cheered his appearance in a state he must win this year to secure re-election.

Serving as the grand marshal for the kickoff race of the NASCAR season, Mr. Trump arrived at the packed stands after a rare Air Force One flyover and later rounded the track in his limousine, nicknamed The Beast, to raucous cheers from the crowd. Shortly after the president told drivers to “start your engines,” Air Force Thunderbirds roared overhead.

“NASCAR fans never forget that no matter who wins the race, what matters most is God, family and country,” Mr. Trump said to the thousands in the stand and group of invited guests and members of the military at Victory Lane before the race started.

He called it a moment of “pure American glory” and said “the cars will take to the tracks, the tires will screech, rubber will burn, fans will cheer.”

“Good luck, and may the best team win,” he said.

The appearance at the NASCAR event, also known as the Great American Race, was a highly choreographed showing by the sitting president and part of a concerted effort by his re-election campaign to solidify support among his core voters.

Mr. Trump won Florida’s 29 electoral votes in 2016, narrowly defeating Hillary Clinton in a state that was critical to his victory. Late last year, Mr. Trump announced that he was moving his official residence from New York to Florida, where he owns several golf clubs and his Mar-a-Lago estate in Palm Beach.

Recent polls in Florida show Mr. Trump hovering around 49 percent or 50 percent when matched against the leading Democratic presidential candidates, underscoring how close the state is likely to be again this year. A survey at the end of January showed Mr. Trump defeating all four of the top Democratic contenders.

Much of that support probably comes from conservative parts of Florida, where NASCAR racing is extremely popular. The Daytona speedway, known as the World Center of Racing, is the main center for the sport. The 500-mile, 200-lap competition is the start of the NASCAR racing season.

Last year, Mr. Trump welcomed Joey Logano, the 2018 winner of the NASCAR Cup Series, at the White House, honoring him alongside his No. 22, bright yellow Ford Fusion in which he dominated the season.

“NASCAR is not only a thrilling display of skill and power, but a celebration of the American spirit. So true,” Mr. Trump said in April. “No matter who wins the race, you never forget what matters most: God, family and country. And nobody embodies that more than you folks, I’ll tell you.”

Previous presidents have also made appearances at Daytona International Speedway.

President George W. Bush served as the grand marshal of the Daytona 500 as he campaigned for re-election in 2004. As a candidate in 1992, Bill Clinton campaigned at the Southern 500 in Darlington, S.C., but was booed by many in the crowd upset by his lack of military service in Vietnam, which was an issue in the campaign at the time.

Mr. Clinton made an appearance at the Daytona International Speedway as president years later, but not on a race day. He delivered a speech about climate change in 1998 after huge forest fires ravaged parts of Florida. Firefighters had used the speedway as the base of their operations to fight the fires.

Like those of Mr. Trump and Mr. Bush, Mr. Clinton’s motorcade made its way around the racetrack, though not at the usual speeds of a NASCAR driver.