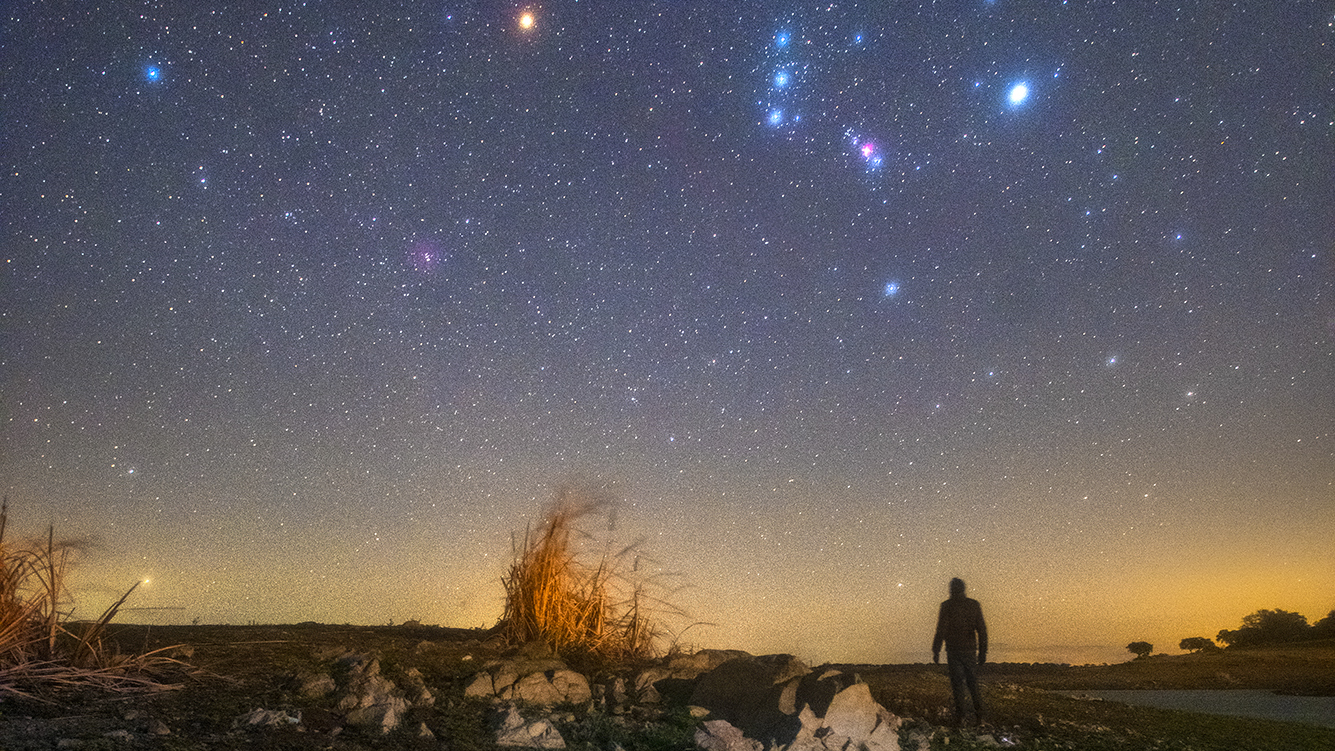 Miguel Claro is a professional photographer, author and science communicator based in Lisbon, Portugal, who creates spectacular images of the night sky. As a European Southern Observatory photo ambassador, a member of The World At Night and the official astrophotographer of the Dark Sky Alqueva Reserve, he specializes in astronomical “skyscapes” that connect Earth and night sky. Join Claro here as he takes us through his photograph “Orion in the Winter Sky and the Story Behind the Fainting Star Betelgeuse.”

Captured during one of my private workshops on Dec. 12, 2019, this image shows a lonely stargazer enjoying the most beautiful constellation of the winter sky: Orion, the hunter.

The photo, captured from one of the landscapes of Dark Sky Alqueva Reserve in Portugal, features the bright star Betelgeuse, which is located on the hunter’s left “shoulder.” Many amateur and professional astronomers since last October have been reporting a decrease in brightness of the yellow-orange star, giving space for some speculation that the star is about to explode.

Related: The dimming star Betelgeuse is acting weird. Here’s how to spot it in Orion’s shoulder.

According to an article published by National Geographic last December, “decades of photometric data show that Betelgeuse brightens and dims in cycles, with one notable cycle vacillating on a roughly six-year time scale and another rising and falling every 425 days or so.”

Scientists suspect that the red supergiant Betelgeuse has recently dimmed quite dramatically because those two periodic cycles are overlapping at minimal brightness, according to a report published in the Astronomer’s Telegram by Edward Guinan, a professor of astronomy and astrophysics at Villanova University in Pennsylvania.

Astronomers have long suspected that the star might explode sometime in the next million years. It’s also possible that Betelgeuse has already exploded and we just haven’t seen it happen; because the star is 600 light-years away, it takes 600 years after something happens on Betelgeuse for light from that event to reach Earth. But if and when astronomers do witness the star’s explosion, it will be the most astonishing astronomy event of all time.

When Betelgeuse explodes, turning into a supernova, it will briefly shine even brighter than the full moon. Then, the star will vanish forever, leaving an “empty space” in our hearts — and in the mythic Orion constellation, which will still be visible in the night sky for us and many future civilizations. Without his left shoulder, however, the hunter will never look the same.