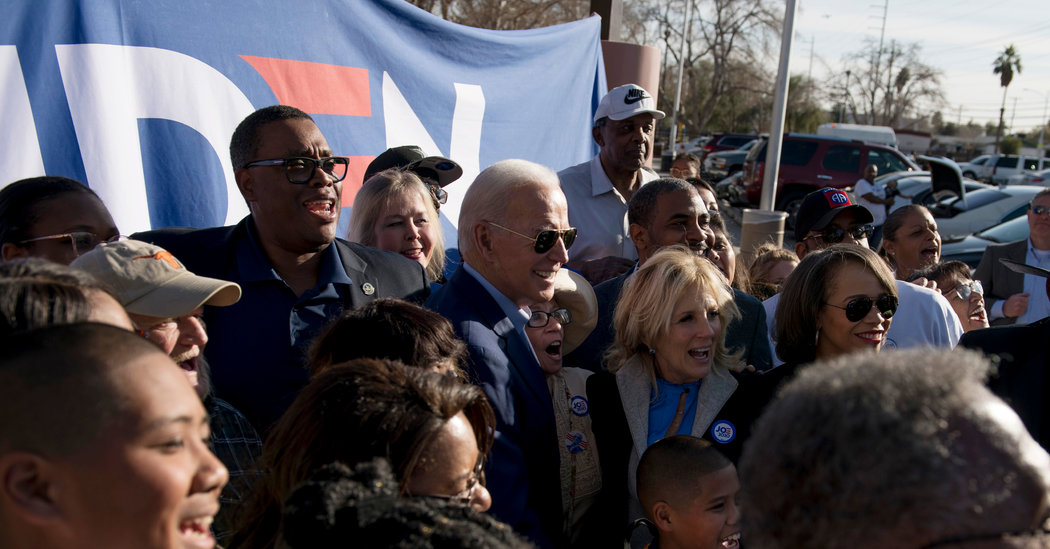 LAS VEGAS — Nevada has a message for Iowa and New Hampshire: We don’t care how you think you narrowed the Democratic field. We will do our own thing.

This state, which will hold its caucuses on Saturday and is more diverse than either of the two that have held presidential nominating contests so far, is determined to shrug off the tradition that momentum gained, or hopes cruelly dashed, in the wintry, rural expanses of Iowa and New Hampshire shape what comes after.

“I don’t think either Iowa or New Hampshire reflect America,” said Jonathan Quitt, who works for a casino on the Strip and is a volunteer for former Vice President Joseph R. Biden Jr. “I think they’re small, white-bread communities without diversity.”

The presidential race’s shift into states with more diverse electorates brings with it the potential for an increased focus on racial issues, and opportunities for candidates like Mr. Biden as well as challenges for Pete Buttigieg, the former mayor of South Bend, Ind., and Senator Amy Klobuchar, who so far have shown little traction with nonwhite voters.

At a Clark County Democratic Party dinner gala at the Tropicana Las Vegas on Saturday night — filled by an establishment crowd willing to pay $150 for dinner and dress up in suits and cocktail dresses — six top presidential candidates spoke, and Mr. Biden seemed to own the room. He gave a raise-the-roof speech about the accomplishments of the Obama administration while criticizing Senator Bernie Sanders’s health care plan for ending the private insurance that unions have fought hard for.

In an interview that aired Sunday, Mr. Biden went after Mr. Sanders, the winner of the popular votes in Iowa and New Hampshire, more explicitly, citing the cost of his “Medicare for all” proposal.

“He’s never gotten anything done,” Mr. Biden said of his rival on NBC’s “Meet the Press.”

“I mean, he’s been talking about health care, Medicare for all, universal health care, for 35 years,” Mr. Biden said. “Nothing’s happened. I helped get passed Obamacare. I helped move it forward. I got the votes.”

Mr. Sanders devoted a sizable portion of his dinner remarks in Clark County, home to 75 percent of the state population, to attacking Michael R. Bloomberg, including his record on race as mayor of New York City. Mr. Sanders denounced Mr. Bloomberg, who isn’t on the ballot here on Feb. 22, for “racist policies like stop-and-frisk,” the policing tactic that has been criticized for disproportionately affecting people of color and for which Mr. Bloomberg has apologized.

New York’s current mayor, Bill de Blasio, who endorsed Mr. Sanders on Friday and introduced him at a campaign event on Sunday in Carson City, Nev., carried forward the attacks on Mr. Bloomberg.

“For years and years, we were told that we needed a system that denigrated young men of color,” Mr. de Blasio said at the event, referring to stop-and-frisk. “We were told, ‘Oh my God, if we didn’t have it, there’d be crime, there’d be chaos.’”

Mr. De Blasio added, “I am sorry to report to you that, in fact, the chief proponent of stop-and-frisk is in fact running in this election.”

Reflecting the rising impact of Mr. Bloomberg, who looms increasingly large in the 14 Super Tuesday states on March 3, both Mr. Biden and Ms. Klobuchar also went after the free-spending billionaire on Sunday over stop-and-frisk and reports of sexist remarks he has made. “The point is that $60 billion can buy you a lot of advertising, but it can’t erase your record,” Mr. Biden said on “Meet the Press.”

Ms. Klobuchar told CNN’s “State of the Union,” “I don’t think you should be able to hide behind airwaves and huge ad buys.”

At his event in Carson City on Sunday, Mr. Sanders also zeroed in on Mr. Bloomberg’s spending and, denouncing “the power of big money interests and the greed and corruption of the corporate elite,” compared Mr. Bloomberg to President Trump.

“Now, Mike Bloomberg is struggling — he’s down to his last $60 billion,” Mr. Sanders said mockingly. “Hey, life is hard, you know — food prices going up. Housing going up. How are you going to make it on $60 billion? Mike is trying.”

Mr. Sanders went on to accuse Mr. Bloomberg of trying to buy the presidency. “In the midst of his $60 billion, he says, ‘Hey, you know, I used to be mayor, I’m kind of retired now, I know what I’d like to do — I’d like to become president of the United States,’” Mr. Sanders said, going on to note Mr. Bloomberg’s unusual strategy of skipping the early nominating contests. “I didn’t see Mike in Iowa, where we were holding town meetings with folks there. I didn’t see him in New Hampshire. Hey, you know what — I didn’t see him here in Nevada. Didn’t see him in South Carolina.”

He concluded: “I got news for Mr. Bloomberg, and that is the American people are sick and tired of billionaires buying elections.”

Mr. Bloomberg’s rising presence as a wild-card candidate around whom center-left voters might coalesce reflects Mr. Biden’s diminished stature, after he finished fifth in New Hampshire and fourth in Iowa.

But the former vice president and his supporters remain hopeful. Mr. Quitt, when asked if he was discouraged, was adamant: “Not. At. All.”

Public polling has been scarce in Nevada. But there are some signs that Mr. Biden could find at least the partial firewall he needs here for his campaign in Saturday’s caucuses. “There can be no Democratic nominee, none, without the voice of Latinos and African-Americans being heard, and heard loudly,” he said on Saturday night. The state is nearly 30 percent Latino and 10 percent black, and has a fast-growing Asian-American population.

In addition to Nevada’s greater diversity, its residents have witnessed far fewer candidate visits, nor have they been the focus of national news for a year in the way that those in Iowa and New Hampshire were.

The state’s more transient population, with many residents disconnected from neighbors and focused on jobs, makes for less obsessive following of political news.

Just as Mr. Biden’s universal name recognition kept him aloft in national polls for months, he still seems to enjoy that edge in the state.

At the same time, the base of support that Mr. Sanders laid down with a close-fought second-place finish in the state’s 2016 caucuses is much intact.

Jessica Slovak, a nurse who caucused for Mr. Sanders four years ago, was still with him as she waited in a long line over the weekend at a site for early caucusgoers in Las Vegas, where other Sanders supporters strummed an electric guitar and sang along to “The Bernie Necessities.”

Her husband, Chase Slovak, who was standing with her in line and also supports Mr. Sanders, said he was not as extreme as rivals and the news media portrayed him. But Ms. Slovak disagreed.

“I personally think he’s as far left as you can go,” she said. “It’s for the greater good. And I’m going to vote with my heart for the person that I think would be the best for us.”