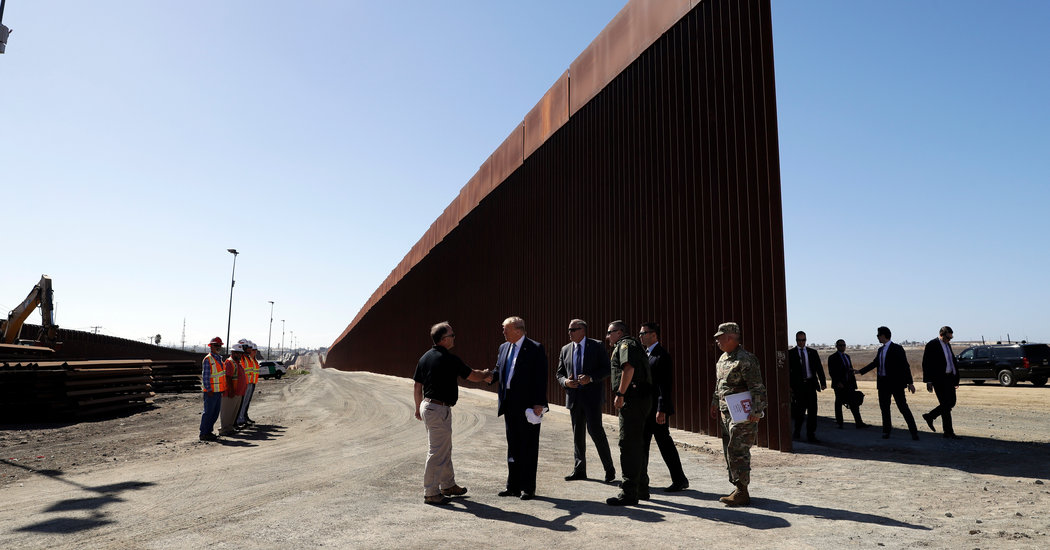 That “big, beautiful wall” President Trump never tires of carrying on about is becoming one of the most expensive campaign stunts ever. It is a potentially unconstitutional one as well, as the Defense Department prepares to divert more billions of dollars authorized by Congress from a variety of weapons programs to generate bragging rights for Mr. Trump’s re-election campaign.

On Thursday, the Pentagon formally notified Congress that it would divert $3.8 billion to the Department of Homeland Security to build about 177 miles of fencing along the Mexican border. That will bring to nearly $10 billion what the administration has taken from defense accounts for wall construction, after a skeptical Congress authorized only $1.375 billion.

Lawmakers from both parties have assailed the White House’s raids on military funds as violating Congress’s constitutionally mandated power of the purse.

“This latest effort to steal congressionally appropriated military funding undermines our national security and the separation of powers enshrined in our Constitution,” Speaker Nancy Pelosi and Senator Chuck Schumer, the Democratic leaders, said in a joint statement on Thursday.

The Pentagon said the money it was ceding would have gone to fighter jets, combat aircraft, ships and National Guard equipment. Instead, it will be used to put up 30-foot-high barriers along six sections of the border so Mr. Trump can boast that he is fulfilling his campaign promise, despite Congress’s repeated refusal to give him all the money he wants and lower court rulings that barred his use of other funds for the wall. Mr. Trump managed this in part by declaring a state of emergency a year ago to divert military funds, and in part thanks to a Supreme Court ruling that set aside lower court injunctions that prevented Mr. Trump from commandeering Pentagon cash to pay for the wall.

It has become almost tedious to recite the reasons this wall is a waste of money, starting with the fact that it was initially conjured up by Mr. Trump’s campaign advisers, back when he was exploring a run for the White House, not as a solution to illegal border crossing but as a talking point to make sure that their man, famously resistant to reading from a script, would remember to talk about getting tough on immigration.

Once Mr. Trump was elected, the talking point that became his signature campaign promise then became the signature obsession of his presidency. The battle over its funding with a skeptical Congress led at one point to a partial government shutdown and the declaration of a state of emergency. “Build the Wall” became a mantra at Mr. Trump’s rowdy rallies, the motto of meanspirited and often cruel efforts to close America’s doors to immigrants, especially Muslims or immigrants of color, legal or illegal.

The onslaught against America’s openness to immigrants has taken many shapes, from the separation of children from their parents, to the shutting down of various preferential visa programs, to the bans on travelers from some predominantly Muslim countries. The administration has won temporary approval from the Supreme Court to deny green cards to immigrants thought likely to tap public assistance programs, the so-called public charge rule. It has also barred New Yorkers from applying for trusted-traveler programs as punishment for a state law limiting immigration agents’ access to state driver’s license information.

But the expensive and useless wall has remained the centerpiece of Mr. Trump’s spiteful vision. From the outset, the project has been riddled with lies and illusions. Mr. Trump has argued that the wall would block illegal migrants, though as many as half of the undocumented immigrants in the United States entered legally and overstayed their visas. He claims that the southern border is a “pipeline for vast quantities of illegal drugs,” though according to the Drug Enforcement Administration most trafficking occurs through ports of entry — or, in the case of the powerful opioid fentanyl, through the mail.

It may well be that the $738 billion military budget for 2020 is too big, and that skimming a few billion off the top won’t affect American security. That misses the principle. The power of the purse belongs to Congress, and the lawmakers should decide how America’s wealth is spent. Despite its bitter divisions, Congress has repeatedly concluded that the wall Mr. Trump wants to build is a waste of money.

That does not mean there should be no barriers along the 1,954-mile long border. In fact, there are already 650 miles of fencing of various kinds, and most of what the administration has been doing so far is replacing the older barriers with an elaborate “border wall system.” The cost has been somewhere between $20 million and $30 million per mile in southern Texas (Israel’s wall on the West Bank, by contrast, cost at most $5 million a mile), and the price will only rise as the administration moves to acquire privately owned land through eminent domain, a process that entails lengthy and costly legal action.

That is a ridiculous price to pay so that the president can revel in chants of “Build the Wall” from followers, most of whom would surely vote for him with or without a wall.

Congress, aware that the wall is costly nonsense, ought not allow itself to be sidestepped. It could vote down the state of emergency — and the White House veto that would follow. It could then finally embrace its duty to write a long-overdue comprehensive immigration bill, based on American traditions of tolerance and humanity, that would include a reasonable and functional border barrier.