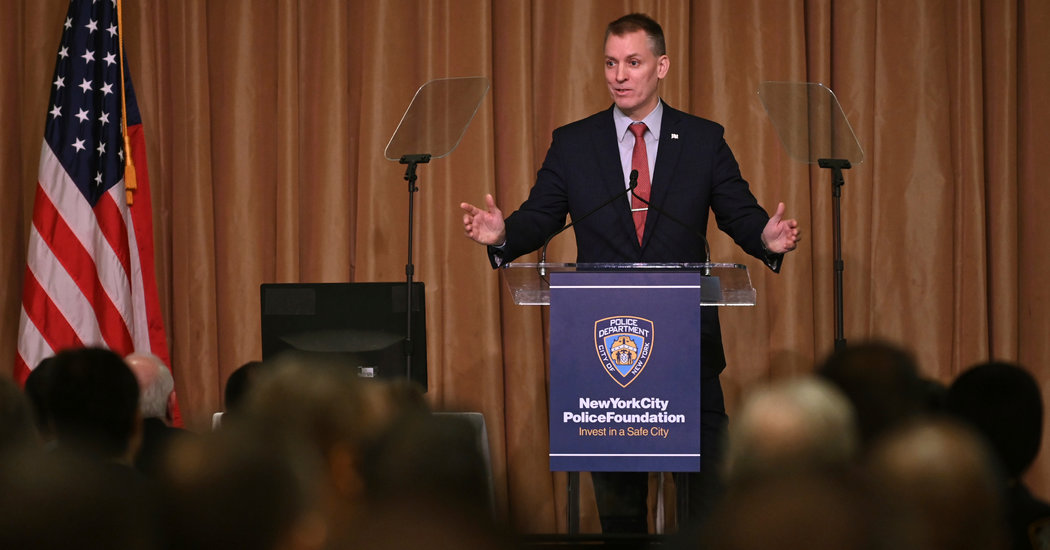 The move by the New York Police Department against one of the city’s biggest tabloids was unusual: It issued a subpoena demanding information about a New York Post reporter’s Twitter account and cited an antiterror law passed after the Sept. 11, 2001, attacks.

The legal maneuver has raised concerns that the department, the nation’s largest police force, is taking aggressive steps to control the media’s coverage of the agency.

Before his promotion, Commissioner Shea was the head of the department’s detective bureau, where he had gained a reputation for being reluctant to release information to reporters.

The subpoena sought internet service provider addresses, emails and other information affiliated with the Twitter account of Tina Moore, the chief police reporter for The Post.

The order was issued to Twitter, which refused to comply and notified The Post this week about the subpoena. After lawyers for the newspaper contacted the Police Department, the agency dropped its demand.

The police can under certain circumstances issue subpoenas directly, without seeking the approval of a judge.

The department was investigating the leaking of crime scene photos to Ms. Moore and was seeking information from between Oct. 9 and Oct. 14, 2019, when Ms. Moore posted images from a shooting that left four people dead, The Post said.

“We are conducting an investigation to identify the person who leaked crime scene photos,” Sergeant Jessica McRorie, a police spokeswoman, said in a statement. “Tina Moore was never the focus of our investigation.”

Iva Benson, a spokeswoman for The Post, issued a statement saying the Police Department’s actions were “antithetical to a free press.” “The Patriot Act was passed to make it easier to prevent deadly terror attacks,” she said, “not help the government crack down on people who speak to reporters.”

Free-speech advocates said the subpoena was an odd tactic, in part because New York State has some of the most stringent shield laws in the country and protects journalists from disclosing confidential information about their sources.

“The subpoena would have been unsuccessful and is kind of frivolous,” said George Freeman, the director of the Media Law Resource Center, a nonprofit resource group for journalists, and a former lawyer for The New York Times. “New York law is very protective of reporter’s news-gathering information.”

The news of the subpoena came just days after a freelance photographer, Amr Alfiky, was detained after filming arrest of a man in Manhattan’s Chinatown.

Mr. Alfiky, who has credentials from the Police Department identifying him as a news media photographer, refused orders from officers to stop filming, the police said.

He said he told officers that he was journalist. But the police said he was not displaying his credentials at the time, and he was arrested.

Mr. Alfiky was given a desk appearance ticket for disorderly conduct, said Mickey Osterreicher, his lawyer.

Police officials said the leak of the photos to Ms. Moore was a violation of the department’s patrol guide. In certain cases, the police said, the unauthorized release of crime scene photos could be considered an obstruction of government administration, a misdemeanor under state law.

But free-speech experts said they did not understand why the Police Department, in its effort to investigate the leak, turned to the Patriot Act, a post-Sept. 11 statute that granted the federal government broad powers to surveil citizens.

“The total silliness, that they used the Patriot Act act as a basis for the subpoena in the first place,” Mr. Freeman said. “Certainly, a private police investigation looking for a leaker is not what the Patriot Act is about.”

The part of the act that the subpoena mentions, Section 211, refers to information and metadata transported over airwaves.

The Police Department’s issuing of the order also raised worries among free-speech advocates about how the agency uses its subpoena power.

“One wonders whether they can just issue subpoenas willy-nilly, when anyone in the Police Department feels like it,” Mr. Freeman said.