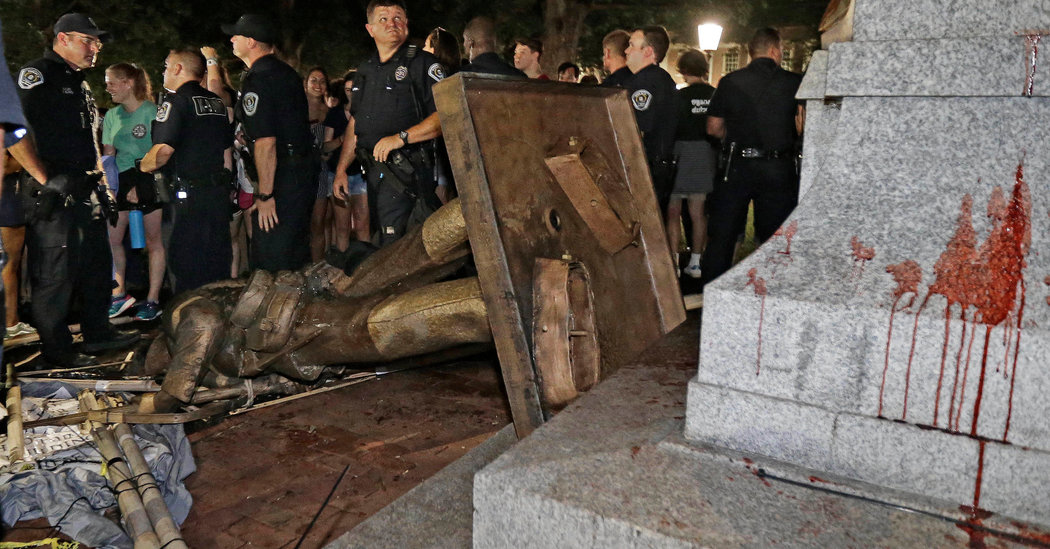 The question of what to do with Silent Sam — the Confederate statue that was toppled by protesters at the University of North Carolina at Chapel Hill in August 2018 — just won’t go away.

The university thought it had found an answer in November when it reached an agreement to give the statue to the North Carolina Division of the Sons of Confederate Veterans and fund a $2.5 million trust to display it somewhere off campus.

But rather than settle the issue, the pact infuriated professors, alumni and students, who accused the university’s board of governors of entering into a back-room deal with a white nationalist group.

On Wednesday, those critics won a victory when the judge who originally approved the agreement voided it, finding that Sons of Confederate Veterans lacked the legal standing to enter into the pact.

Now, the university must once again decide what to do with the bronze monument, which was torn down amid a broader reckoning over relics of the racist past.

Erected in 1913, the monument is one of many across the South that depict a generic Confederate soldier gripping a rifle. At its dedication, a former Confederate soldier named Julian Carr delivered a speech praising the Confederate Army for saving “the very life of the Anglo Saxon race in the South” and recalled that he had “horsewhipped” a black woman “until her skirts hung in shreds” because she had publicly insulted a white woman.

“Today, people often read the monuments as veterans memorials,” said James L. Leloudis, a professor of history at the University of North Carolina at Chapel Hill. “But the people who erected the monuments went out of their way to make it clear that they honored the living as well as the dead, and most particularly, those ex-Confederates who returned from war and committed themselves to the long, bloody and ultimately successful effort to re-establish white supremacy.”

Confronted with that history, some municipalities have removed, sold or sought to contextualize Confederate monuments with historical panels. The University of North Carolina, on the other hand, has offered what critics have called an object lesson in how not to handle the potentially explosive debate over Confederate symbols.

The board of governors never publicly discussed giving the monument to the Sons of Confederate Veterans before announcing the agreement on the day before Thanksgiving. And it agreed to the terms of the transfer before the Sons of Confederate Veterans sued the university, claiming ownership of the statue. The deal was approved by the judge, Allen Baddour of Orange County Superior Court, mere minutes after the suit was filed.

Karl Adkins, a retired judge and one of the first black students to graduate from the university, was among a number of prominent alumni and donors — including Taylor Branch, the Pulitzer Prize-winning biographer of the Rev. Dr. Martin Luther King Jr., and Carla Overbeck, the former Olympic soccer captain — who joined a legal brief arguing the deal “seriously damages the reputation of the university, which should be committed to historical truth and opposed to modern-day white supremacy.”

“I don’t think there’s any way the Sons of Confederate Veterans should be paid to take care of something that ought to be destroyed,” Mr. Adkins, a member of the class of 1968, said.

He recalled fighting to integrate restaurants in Chapel Hill and then returning to campus to see Silent Sam.

“And there he is looking over you,” Mr. Adkins said. “I remember him very well. I’m glad it’s gone and I hope to never hear about it anywhere.”

William Sturkey, a historian at U.N.C. Chapel Hill who specializes in the history of race in the American South, said the agreement represented “a clear case of corruption” between the board, whose 24 voting members were elected by the North Carolina General Assembly, and the Confederate group.

“We need more rational, clearheaded voices — not just a small group of people making a back-room deal with a white nationalist organization,” he said.

The university rejected that characterization, pointing out that Judge Baddour said at a hearing in December that he was approached by lawyers in the case before the filing of the lawsuit. “We all know that this occurs in cases of many types,” the judge said.

Those who have followed the saga said it underscored how critical it was for universities and municipalities to solicit a broad range of voices when debating how to dispense with Confederate statues.

“Chapel Hill is a special case, and it’s particularly special because it’s been going on so long, and it’s so heated, and every time they’ve tried to solve it, they’ve chosen the clumsiest way possible and made it worse,” said F. Sheffield Hale, the president and chief executive of the Atlanta History Center, which encourages community-driven discussions about Confederate monuments.

The university’s lawyers said they were restricted by a North Carolina law that forbids the removal of monuments on public property, except in limited cases. The law, passed in 2015 amid growing protests over Silent Sam and other Confederate monuments, is unlikely to be repealed by the Republican-controlled General Assembly.

Transferring the statue to the Sons of Confederate Veterans was a reasonable way to comply with the law while ensuring public safety and returning the campus to normalcy, Ripley Rand, a lawyer for the university board, said in court on Wednesday, according to a video of the hearing posted by WRAL, a television station in Raleigh.

Mr. Rand noted that, under the agreement, the Confederate group could not display Silent Sam in any of the 14 counties with a U.N.C. school.

“The message that the board of governors received from the university community was clear: We do not want the monument back on campus,” Mr. Rand said, according to the video.

But Judge Baddour ruled that the Confederate group lacked standing to file its initial lawsuit claiming ownership of the statue, and voided the deal. He made the decision after the Lawyers’ Committee for Civil Rights Under Law challenged the basis for the settlement on behalf of five students and a faculty member.

Judge Baddour asked the university to submit a new plan by Monday at 5 p.m. detailing what should happen to Silent Sam now. As of Wednesday, it was being kept in a storage space by the Sons of Confederate Veterans.

Mr. Rand said the ruling was not the result the board hoped for, but noted that it would respect the decision.

“The Board of Governors knew from the very beginning that this was a difficult but needed solution to meet all their goals to protect public safety of the university community, restore normality to campus, and be compliant with the Monuments Law,” he said in a statement. “The Board of Governors will move forward with these three goals at the forefront and will go back to work to find a lasting and lawful solution to the dispute over the monument.”

C. Boyd Sturges III, a lawyer for the Sons of Confederate Veterans, said the group disagreed with and was disappointed in the ruling but would obey it. He said the Confederate group would give the statue back to the university and believed the “memorial should be put back since U.N.C. now owns it again.”