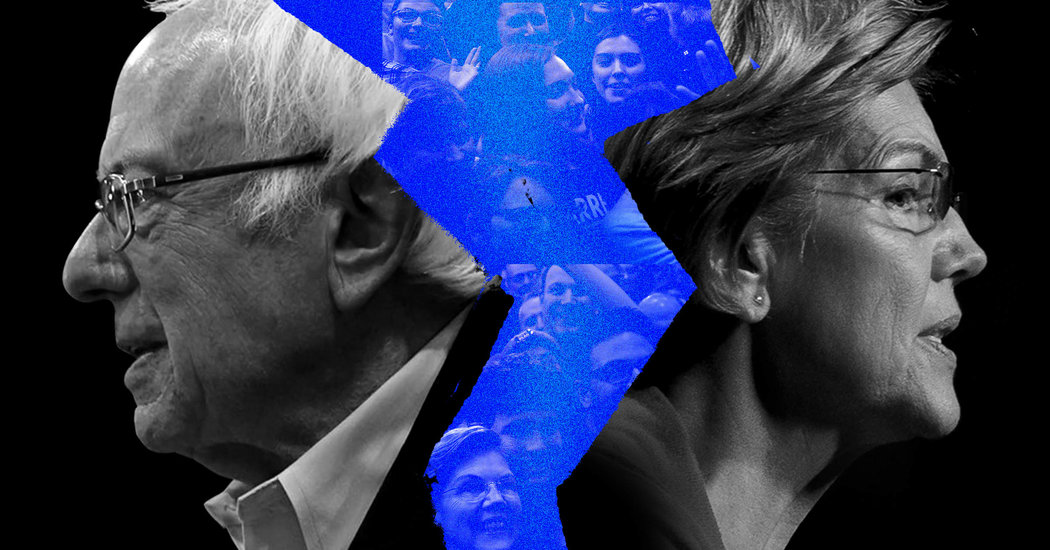 In the Democratic presidential primary, two states have had their say — two small, unrepresentative, delegate-poor states. Yet those elections — or whatever one calls what happened in Iowa — have reset the contest, vitalizing some campaigns (Klomentum!) while leaving others on life support. Three wound up in the morgue.

The early voting is also helping distill the campaigns to their essentials. This is particularly instructive in the so-called progressive lane, where Bernie Sanders and Elizabeth Warren have been fighting over the party’s excitable base.

Ms. Warren came roaring into this race with credibility as both an insider and an outsider, an anti-corruption crusader with experience navigating Washington’s bizarre folkways. She was a candidate of passion and substance, a fighter who churned out policy proposals faster than President Trump spits out conspiracy theories. Whatever your issue, Liz had a plan for that.

But upon emerging as a favorite last fall, Ms. Warren drew heavy fire from her competition, especially over her Medicare for All plan. Her response was less than nimble. She put out a more modest, phased-in plan, prompting attacks from the left. Her poll numbers and fund-raising slid, until she landed at a disappointing third in Iowa, followed by a dismal fourth in New Hampshire.

Ms. Warren’s campaign is far from dead, but it is now being discussed in the hushed tones reserved for the critically ill, and her path to a comeback is unclear.

In an election defined by Democrats’ desperation to defeat a president many consider a threat to democracy, a candidate’s perceived electability is crucial. Ms. Warren was already considered a risk by many. Some feared her policies were too progressive. Others found her manner condescending. Still others shared Mr. Sanders’s alleged concerns that a woman cannot beat Mr. Trump. Back-to-back electoral flops will make it that much harder for her to allay voters’ — and funders’ — anxieties. She does not poll particularly well with minority voters, so, unlike Joe Biden, she cannot offer reassurances that the shift to more diverse states will turn things around. And unlike certain billionaires, she lacks the wherewithal to buy herself a permanent spot in the race.

Ms. Warren insists that her campaign is built “for the long haul.” She has also vowed to stick with her focus on policy and unity and to avoid personal attacks on the competition.

On the night of her New Hampshire loss, Ms. Warren bemoaned the intensifying nastiness between some of the other campaigns and their supporters. “The fight between factions in our party has taken a sharp turn in recent weeks,” she said. “These harsh tactics might work if you’re willing to burn down the rest of the party in order to be the last man standing.” But to beat Mr. Trump, she said, “we will need a nominee that the broadest coalition of our party feels like they can get behind.”

Ms. Warren maintains that she is the person to build that coalition — that she will outlast flashier candidates and eventually make voters see the rightness of her position.

If Ms. Warren is the progressive of high-minded policy, Bernie Sanders is the progressive of belligerent revolution. Much of his appeal, dating back to his 2016 presidential run, lies in his grouchy, I’m-not-here-to-make-friends pugilism. For voters spoiling for a fight — whether against Mr. Trump, the Democratic establishment, the 1-percenters — Mr. Sanders has become a cult hero.

But many Democrats fear that the democratic socialist and his rowdy revolutionaries would usher in a second Trump term. This is especially true of moderates, who see Mr. Sanders as so far outside the mainstream that he would drag down other Democrats on the ballot. For much of this race, Mr. Sanders languished in Ms. Warren’s shadow, dismissed as too divisive to be the standard-bearer for a nervous party to which he does not even belong.

But as Ms. Warren has faded, Mr. Sanders has consolidated progressives behind him, while moderates remain split between multiple contenders. After a narrow loss in Iowa to Pete Buttigieg (at least at last count), Mr. Sanders scored a solid win in New Hampshire, which borders his home state. The victory was far from overwhelming, edging Mr. Buttigieg by less than two percentage points. But it was enough to make him the presumptive front-runner.

If he is to lead the entire Democratic Party, Mr. Sanders needs to find a way to reach beyond his core supporters and reassure the moderates who fear he would be a disaster in the general election.

This is no small challenge, in part because of his passionate — some might say rabid — following. The so-called Bernie Bros have a nasty reputation on social media for abusing those who dare to criticize their guy, spewing invective and issuing threats against offending organizations and individuals.

A fight along these lines is brewing in Nevada, whose Feb. 22 caucuses are next on the primary calendar. Organized labor is a powerful force in the state, thanks to the legions of workers who keep the casinos and hotels humming. Recently, the state’s Culinary Workers Union issued a flier outlining the candidates’ positions on top issues. Under health care, they noted that Mr. Sanders’s plan would “end” the union’s hard-won benefits.

This did not sit well with the Bernie Bros, who, the union reports, “viciously attacked” its members with ugly emails, calls and tweets. The union issued a statement condemning the behavior. Bernie fans turned up the heat, blaming union bosses, the media, political elites and the rest of Democratic field for the controversy.

It was a sad reminder of 2016, when Mr. Sanders’s narrow loss to Hillary Clinton in the state enraged his followers, who insisted the process had been rigged. Party officials were harassed and the state’s nominating convention was shut down early over security concerns. A bad scene all around.

Mr. Sanders recognizes the problem and now and again calls on everyone to keep it respectful. Last month he offered a rare apology for an over-the-top op-ed from one of his surrogates accusing Mr. Biden of corruption.

The coming weeks promise even more churn and drama, as more diverse electorates cast their votes in states with vastly more delegates on the line. For now, Mr. Sanders’s progressive vision has the upper hand. But the race is young — and turbulent.