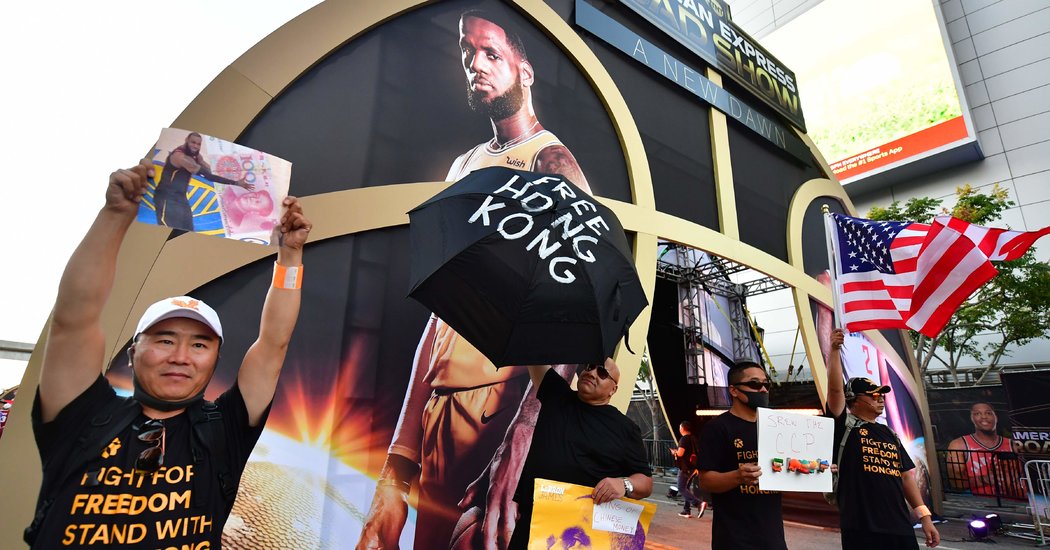 The day after Kobe Bryant died, the Chinese ambassador to the United States, Cui Tiankai, posted a statement on Twitter: “Saddened by the tragic loss of #KobeBryant. An inspiration for many and a legend of his generation, he will always be remembered for his contribution to the world of sport and to #ChinaUS people-to-people exchanges.”

Though Bryant was a huge star in the country — even the most popular sports figure, for awhile — the ambassador’s message was notable. China and the N.B.A. have been on the outs since October, when Daryl Morey, the general manager of the Houston Rockets, shared an image on Twitter that showed support for the pro-democracy protesters in Hong Kong. This roiled the Chinese government and instantly derailed decades of league efforts to court the country’s sizable basketball audience, initiating a conflict at the rare intersection of sports, domestic politics, corporate profits and international relations.

Four months later, China is grappling with the coronavirus that has sickened thousands of its people and disrupted the economy, and as the N.B.A. embarks on its signature All-Star weekend, in Chicago, there are signs that tension between the two sides has begun to dissipate, even beyond the tweet from Cui.

“Right now, our focus is on working with global health organizations to provide whatever assistance we can to the people of China in response to the coronavirus outbreak,” N.B.A. Commissioner Adam Silver told The New York Times on Thursday in an emailed statement. “Many of our Chinese partners were unable to attend our N.B.A. All-Star events because of travel restrictions, but all of the weekend’s events will be carried in China on Tencent.”

This, too, is notable. Tencent, the Chinese streaming network, after initially stopping its coverage, has been showing up to three games a night. China’s state-run television network, China Central Television, canceled its broadcasts of the preseason games between the Los Angeles Lakers and the Nets and several other related league events in the aftermath of Morey’s tweet. Silver, at a live event soon after, said the Chinese government had demanded that Morey be fired — but he immediately said no. The N.B.A. has not been back on CCTV since.

There are those around the league who believe there is a chance that CCTV airs the N.B.A. All-Star Game — and more games after that. Joe Tsai, the co-founder of the Chinese e-commerce conglomerate Alibaba and owner of the Nets, recently told Bloomberg, “Once you’re on the air, everything will come back.” (Tsai declined to comment.)

At the time of the initial controversy, Yao Ming, the former Rockets great and chairman of the Chinese Basketball Association, was described as “extremely hot” by Silver over the situation. But he traveled to the United States last month to attend a memorial service for David Stern, the former commissioner of the N.B.A. Silver and Yao spoke at the memorial, according to a source familiar with the discussion who was not authorized to disclose it publicly. Last week, Huang Ping, the Chinese consulate general, thanked the league at a media briefing in New York for donating $1.4 million to the Hubei Province, the center of the coronavirus, to help fight its spread. Several N.B.A. teams marked the Chinese New Year with promotions at their arenas, as they have in other years.

While the protests in Hong Kong remain a hot button topic in China, as the reaction to Morey showed, Kristen Looney, an assistant professor of Asian studies and government at Georgetown University, said China could choose to move on as if nothing happened.

“They do that occasionally. It’s big business for them too, having the N.B.A. in China,” Looney said. “Hundreds of millions of people watch basketball in China — and I know they’re unhappy with lack of access. But I doubt anything happens during this N.B.A. season, unless the government decides that bringing the game back would be a welcome distraction from the public health crisis.”

The stakes are high for the league. Since 2004, the N.B.A. has played 28 games in China. Star players travel every year for promotional tours. Shoe sales are a major source of revenue for manufacturers. There are more basketball fans in China, a country with 1.4 billion residents, than in the U.S., which has a population of 330 million. The league maintains its business in China with about 200 employees in offices in Shanghai, Beijing, and Hong Kong. It also has an office in Taiwan, the democratic island claimed by Beijing that has asserted its independence from China.

“I see it as something that’s going to take time,” said Todd Ramasar, an N.B.A. agent with overseas clients who has also negotiated deals in China. “I don’t think it’s something as simple as saying this is centered around the N.B.A. This is much bigger than that.”

The timing of the All-Star game, on Sunday, may be a stroke of good luck for the N.B.A. because of the larger domestic politics involved. On Friday, the first phase of the trade deal struck last month between China and the U.S. will take effect, signaling the warmest point in the relationship between the two countries since President Trump took office.

Earlier this month, at his State of the Union speech, Trump said, “We have perhaps the best relationship we’ve ever had with China, including with President Xi,” referring to China’s leader, Xi Jinping. On Feb. 7, Trump praised Xi for the Chinese government’s response to the coronavirus.

But there is also mixed messaging — an indication of the often fraught relationship between the two countries. At the end of January, Secretary of State Mike Pompeo called the ruling party in China the “the central threat of our times.”

It is unclear what the business impact of the China fallout has been for the N.B.A. One indicator is the league’s salary cap, the amount that each team can spend on player contracts each season. It is determined by the amount of basketball related income the N.B.A. takes in. Next season, it is projected to be $116 million, an increase from $109.1 million this season, according to ESPN — an indication that the league is in a healthy place. However, projections can change. And China is one of several external revenue streams.

There are also critics in America who believe that the league should limit its dealings with an authoritarian government.

At home, the N.B.A. faced blowback from politicians all over the spectrum following Morey’s Twitter post, which read “Fight for Freedom. Stand with Hong Kong.” The critics, including many Democratic presidential candidates and their ideological foes, like Senator Ted Cruz of Texas, accused the N.B.A. of capitulating to a repressive regime to increase its bottom line. The league said at the time that the anger from the Chinese mainland was “regrettable” and Morey had “deeply offended many of our friends and fans in China.” The Chinese version of the statement read differently and said that the league was “extremely disappointed in the inappropriate comment” by Morey. Morey has not spoken about the issue publicly since a follow-up statement in which he said he did not mean to “cause any offense.” He declined to comment for this article.

In the months since, the United States has had to confront the fact that many businesses have interests in China. Bob Iger, the chief executive officer of Disney, said at a conference in October that he would not criticize China’s handling of the Hong Kong protesters because “to take a position that could harm our company in some form would be a big mistake. I just don’t believe it’s something we should engage in a public manner.” The comments went unmentioned by many of the same politicians who blasted the N.B.A.

Silver has also made clear that he would like the league to make amends with China, regardless of the optics of doing business with an oppressive regime. Mike Bass, an N.B.A. spokesman, said the league has “no plans to stop distributing our games in China.”

“We continue to believe in the unique power of sports to bring people together across cultures,” Bass said.