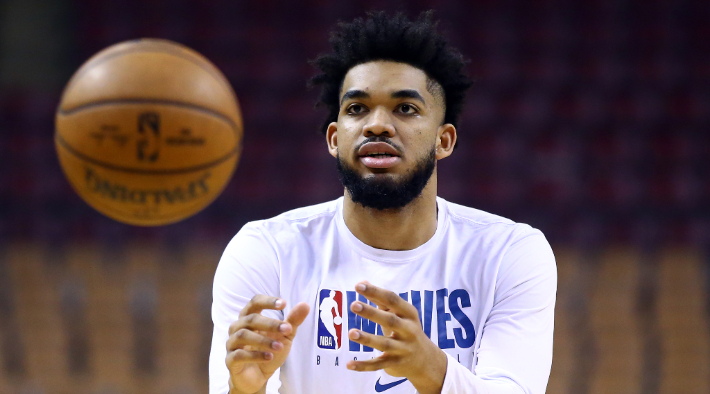 The 2019-20 season has been a lost one for the Minnesota Timberwolves but, with the arrival of D’Angelo Russell in advance of the trade deadline, things have the opportunity to reset in the Twin Cities. Before Russell even took the floor, the Wolves had their best offensive performance of the season in a bludgeoning of the L.A. Clippers and, if nothing else, there is more optimism in Minnesota with a two-man core in place. The centerpiece of the team is now battling another injury, though, with Karl-Anthony Towns missing the team’s final game before the hiatus and reporting now emerging that it won’t be a one-game absence.

Jon Krawczynski of The Athletic brings word that Towns, who missed a home loss to Charlotte on Wednesday with a left wrist injury, is expected to miss “multiple games” when the Wolves return to the floor after the All-Star break. Minnesota’s first game isn’t until Friday, Feb. 21 against the Boston Celtics but, while there is nothing official about Towns’ status, the leading reporter on the ground in Minneapolis believes it may not be a quick absence.

Towns missed extended time earlier this season with a knee ailment and, considering his ironman nature before that injury, the 15-game absence was even more noteworthy. For what it’s worth, The Athletic’s report does that that “there is no sense that surgery will be needed to address the issue,” pouring cold water on any thought of a long-term physical issue.

Still, the Wolves are so far out of the race that there could be plenty of reason to be careful with Towns, knowing full well that his health is key to the team’s long-term plans. On the other hand, the Wolves and head coach Ryan Saunders could certainly use some court time with all of their key pieces on the floor for team-building purposes, and it will be interesting to see how long the mega-talented center is on the sideline.