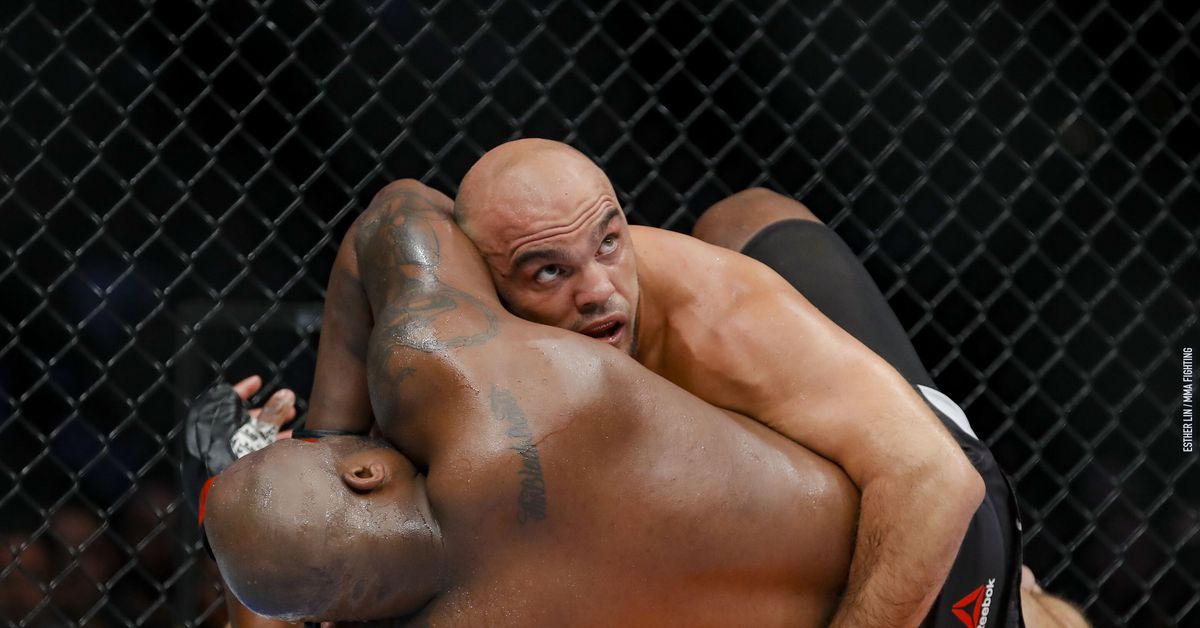 Ilir Latifi understands how to accept a loss, but there’s no way he’s conceding defeat after coming out on the wrong end of a judges’ decision at UFC 247.

The former 205-pound contender moved up to heavyweight for the first time this past weekend and engaged in a back-and-forth battle with Derrick Lewis for three rounds.

Despite giving up a lot of size to his opponent, Latifi was able to muscle Lewis around the Octagon for much of the fight while landing several canvas-shaking takedowns. While Lewis definitely had his moments in the fight as well, Latifi believes without a doubt that he did more to win that night yet he left the Octagon with a loss on his record.

“To be honest, I know I was on his home turf,” Latifi explained when speaking to MMA Fighting. “I’m coming from Sweden. I’m coming to the U.S. I’m coming to Houston. I’m fighting the hometown pride, Derrick Lewis, who is one of the most favorite fighters in the UFC. I like him, too. He’s funny as hell. He’s humble. Nothing to take from that but I knew that I wasn’t fighting just Derrick.

“I was fighting the judges. I was fighting everybody in that arena that night. When I came there, I knew what it was. When the fight was over, you saw Derrick’s face. He knew that he lost that fight.”

According to Latifi, the difference was ultimately his ability to control the action while avoiding any of big swings in offense when Lewis would come lunging at him with a huge punch or even a flying knee.

He gives Lewis credit for bringing the fight to him but Latifi says he never really suffered any damage while dishing out plenty of his own over 15 minutes.

“If you see it this way, I controlled my opponent for 15 minutes,” Latifi said. “I practically put him in the situation I wanted. I put him against the cage. I was grinding him and making him tired, taking out those power shots. I took him down.

“He threw some fancy knees and some kicks but I blocked everything and I saw everything. I felt very, very comfortable. He didn’t catch me with nothing. It was maybe one punch but I saw everything. I blocked it and I took it with no problem. Not taking credit from Derrick, for being such a heavy guy, doing that stuff is impressive but I think I had total control of the fight. To be honest, I controlled a 270-pound opponent with ease. Most people can’t control their puppy dog for like a minute. That’s the truth. You maybe don’t like it, but that’s what I did.”

Latifi contends that none of the fault lands on Lewis because he was just doing his job while trying to win the fight. He can’t say the same for the judges, who were constantly under fire throughout UFC 247 for more than a few questionable scorecards.

“I wasn’t shocked that they robbed me,” Latifi said. “It’s so sad to see that they do that. Because this is the future of the sport. They’re playing around with athletes, fighters’ lives that put everything on the line. We sacrifice so much. We sacrifice our health. We leave our families. We do so much and to leave that in the hands of the judges or a commission that doesn’t understand the sport or favors somebody, that’s wrong. There should be consequences for that, too.

“When fighters do wrong or they break the rules, they get punished for that. But when judges do wrong or rob people from their fights, there’s no consequences for that. It’s bad. It affects the fighters. People can say ‘on to the next one, you did a great fight’ but in a way f*ck that. I did everything for that fight. I came in as a big underdog. I think honestly the judges and everybody there didn’t think I’d last a minute and I came in and dominated him. It wasn’t maybe the way they thought but that’s the truth.”

In addition to having a loss on his record, Latifi points to the real life struggles that come along with a poor decision — namely going home with half his paycheck.

“Bad judgment or judges who were sleeping at the fight or they just want to mess with the scores or favor him, they f*ck with people’s paychecks,” Latifi said. “That’s 50 percent of what you get paid. It’s not a game. It’s so bad.

Latifi isn’t making any decisions yet regarding his future because the sour taste of this loss is still stinging the back of his throat.

More than anything he just wants to raise awareness within the mixed martial arts community that these judging problems aren’t going away until serious, institutional changes are made in the sport.

“The day after, I would fight Derrick again and I’d fight him in Houston again, I have no problem with that,” Latifi said. “But right now, all this situation leaves a big question mark in this sport. Because we put everything on the line and you’re going to let judges like that, that are so incompetent to judge a sport at that level? They’re playing around with people’s lives and it’s not OK.