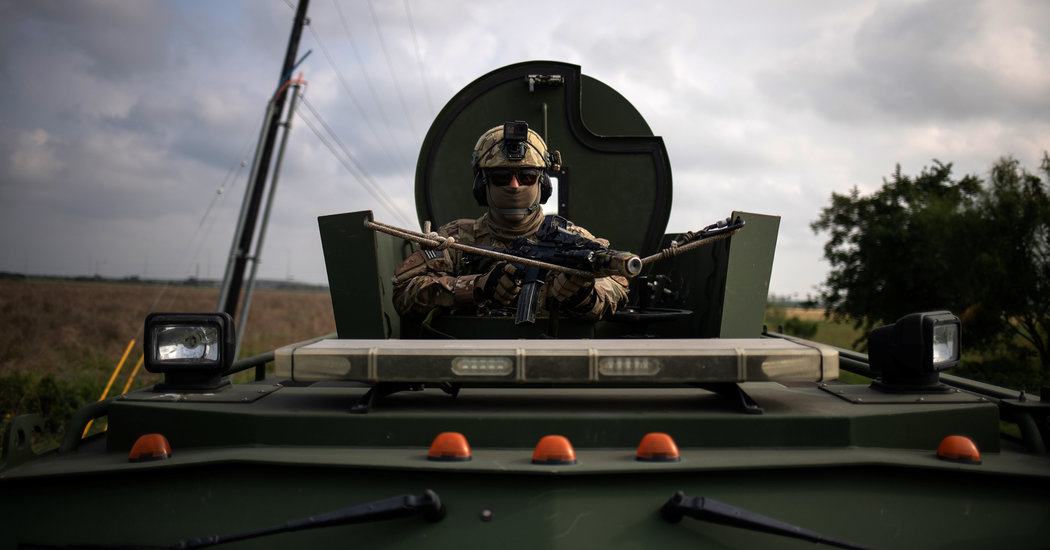 The Trump administration is deploying law enforcement tactical units from the southern border as part of a supercharged arrest operation in sanctuary cities across the country, an escalation in the president’s battle against localities that refuse to participate in immigration enforcement.

The specially trained officers are being sent to cities including Chicago and New York to boost the enforcement power of local ICE officers, according to two officials who are familiar with the secret operation. Additional agents are expected to be sent to San Francisco, Los Angeles, Atlanta, Houston, Boston, New Orleans, Detroit and Newark, N.J.

The move reflects President Trump’s persistence in cracking down on sanctuary cities, localities that have refused to cooperate in handing over immigrants targeted for deportation to federal authorities. It comes soon after the Justice Department and Department of Homeland Security announced a series of measures that will affect both American citizens and immigrants living in those places.

Lawrence Payne, a spokesman for Customs and Border Protection, confirmed the agency was deploying 100 officers to work with Immigration and Customs Enforcement, which conducts arrests in the interior of the country, “in order to enhance the integrity of the immigration system, protect public safety, and strengthen our national security.”

The deployment of the teams will run from February through May, according to an email sent to Customs and Border Protection personnel, which was read to The New York Times by one official familiar with the planning.

Among the agents being deployed to sanctuary cities are members of the elite tactical unit known as BORTAC, which acts essentially as the SWAT team of the Border Patrol. With additional gear such as stun grenades and enhanced Special Forces-type training, including sniper certification, the officers typically conduct high-risk operations targeting individuals who are known to be violent, many of them with extensive criminal records.

The unit’s work often takes place in the most rugged and swelteringly hot areas of the border. It can involve breaking into stash houses maintained by smuggling operations that are known to be filled with drugs and weapons.

In sanctuary cities, the BORTAC agents will be asked to support interior officers in run-of-the-mill immigration arrests, the officials said. Their presence could spark new fear in immigrant communities that have been on high alert under the stepped-up deportation and detention policies adopted after Mr. Trump took office.

In a statement, ICE’s acting director, Matthew T. Albence, said the deployment comes in response to policies adopted by sanctuary cities, which have made it harder for immigration agents to do their jobs.

“As we have noted for years, in jurisdictions where we are not allowed to assume custody of aliens from jails, our officers are forced to make at-large arrests of criminal aliens who have been released into communities,” he said. “When sanctuary cities release these criminals back to the street, it increases the occurrence of preventable crimes, and more importantly, preventable victims.”

But Gil Kerlikowske, the former commissioner of C.B.P., which oversees tactical units along the border, said sending the officers to conduct immigration enforcement within cities, where they are not trained to work, could escalate situations that are already volatile. He called the move a “significant mistake.”

“If you were a police chief and you were going to make an apprehension for a relatively minor offense, you don’t send the SWAT team. And BORTAC is the SWAT team,” said Mr. Kerlikowske, who is the former chief of police in Seattle. “They’re trained for much more hazardous missions than this.”

The Border Patrol squads will be charged with backing up ICE agents during deportation operations and standing by as a show of force, the officials said.

ICE agents typically seek out people with criminal convictions or multiple immigration violations as their primary targets for deportation, but family members and friends are often swept up in the enforcement net in what are known as “collateral” arrests, and many such people could now be caught up in any enhanced operations.

ICE leadership requested the help in sanctuary jurisdictions because agents there often struggle to track down undocumented immigrants without the help of the police and other state and local agencies. Law enforcement officers in areas that refuse to cooperate with ICE and the Border Patrol — which include both liberal and conservative parts of the country — often argue that doing so pushes undocumented people further into the shadows, ultimately making cities less safe because that segment of the population becomes less likely to report crimes or cooperate with investigations.

The goal of the new joint operation, one of the officials said, was to increase arrests in the sanctuary jurisdictions by at least 35 percent.

The operation reflects an increasingly hawkish approach to immigration enforcement, following the firings and resignations of leaders who have been viewed in the White House as unwilling to take the harsh steps Mr. Trump and his advisers view as necessary to slow illegal immigration.

Other recent attempts at aggressive enforcement by ICE have faltered, such as a series of raids targeting more than 2,000 migrant families that were planned during the summer of 2019. Mr. Trump’s advance warnings on Twitter led many of those who were targeted to refuse to open their front doors, and ultimately, only 35 of those who had been targeted were arrested in the operation’s first several weeks.

Even with the added show of force from BORTAC, agents will be limited in their abilities compared to the police or sheriff’s deputies. Unlike operations on the border, where BORTAC agents may engage in armed confrontations with drug smuggling suspects using armored vehicles, immigration agents in cities are enforcing civil, rather than criminal infractions. They are not allowed to forcibly enter properties in order to make arrests, and the presence of BORTAC agents, while helpful in boosting the number of agents on the ground, may prove most useful for the visual message it sends.

The agents will not be busting down doors or engaging in shootouts, said one official with direct knowledge of the operation, who like the other official would not be identified because he was not authorized to discuss it.

Many ICE agents say their jobs have become increasingly difficult, three years into Mr. Trump’s presidency, because of robust campaigns by immigrant advocacy organizations seeking to safeguard undocumented immigrants by educating them on the legal limitations that ICE officers face. As a result, in many communities where undocumented immigrants live, when ICE agents are spotted, people now turn immediately to their phones to alert neighbors that they should stay inside.

Mr. Trump campaigned on a promise to crack down on sanctuary cities. Within a few months of taking office, the Justice Department moved to withhold certain federal funds from the jurisdictions. Last week, the Justice Department filed suit against state and local governments in California, New Jersey and Washington over sanctuary policies there. Also this month, the Department of Homeland Security announced it would ban New Yorkers from enrolling in programs that allow travelers to speed through customs checkpoints in airports and at the border as a result of the state’s decision to offer drivers licenses to undocumented immigrants and bar Homeland Security agencies from accessing the state’s motor vehicle database.

The president again highlighted the issue in his State of the Union address, arguing that sanctuary cities “release dangerous criminal aliens to prey upon the public.”

In January, a New York City Council member wrote an open letter for his fellow councilors expressing concern about increasing ICE activity in the region, including collateral arrests. Last week, an acquaintance of a man in New York who was being arrested by ICE was shot in an incident that the agency later blamed on sanctuary policies.

The aggressive immigration enforcement tactics being implemented around the country are not limited to any one agency. In a widely circulated video recorded in El Paso, Texas, on Tuesday night, Border Patrol agents are shown subduing and using a Taser to apprehend a man in a Burger King restaurant.

The video shows the man pleading repeatedly with the agents while shouting that he had done nothing wrong. A female bystander asks the agents to leave the restaurant, as she cries while witnessing the episode. While the man was writhing in pain on the floor after being stunned repeatedly, another woman in the video approached the agents and asked, “Why are you still hitting him?”

A Border Patrol spokesman said in a statement that the apprehended man was a “suspected alien smuggler,” without offering any evidence to support that assertion. The spokesman did not respond to a request for the man’s name and nationality.

“The man refused to cooperate with the verbal instructions and attempted to avoid being handcuffed and a struggle ensued,” the Border Patrol spokesman said.

In the same statement, the spokesman said that a “citizen” had notified law enforcement of a suspicious vehicle parked on his property. The Border Patrol said the man apprehended by the agents on Tuesday was the driver of the vehicle and that “record checks indicated that the man was in the country illegally and had a positive criminal history.”

An ICE spokesman declined to comment on the specifics of the latest effort in sanctuary cities, citing the agency’s policy against sharing information about enforcement operations before they have taken place. However, the spokesman added that the agency had “made it abundantly clear for years that, in jurisdictions where we are not allowed to assume custody of aliens from jails, our officers would be redirected to make at-large arrests.”