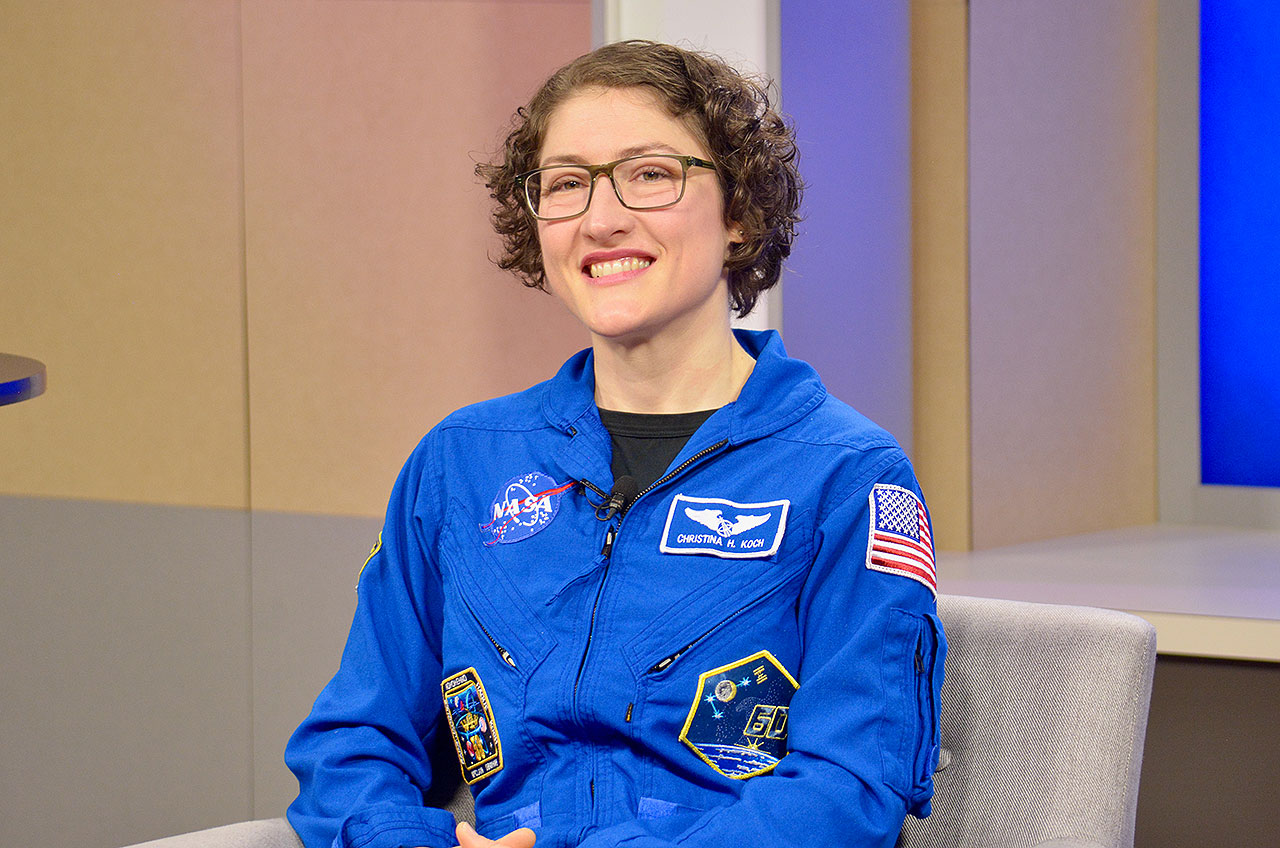 Six days after returning from her record-setting first space mission, NASA astronaut Christina Koch said that it took longer to adjust to life in orbit than it did to transition to being back on Earth.

Koch, who spent 328 days on the International Space Station setting a record for longest single mission by a woman, said on Wednesday (Feb. 12) that she felt at home on board the orbiting laboratory just about a third of the way into her 11-month expedition.

“I would say only about three months in is when I started to sort of feel at home there,” said Koch, during her first NASA news conference since landing from the space station on Russia’s Soyuz MS-13 spacecraft on Feb. 6. “The different things that we do throughout our daily life seemed normal to me — you know, not using a cup to have a drink of water and filling up food packets and things like that.”

“Even floating,” she recalled. “I jokingly say that I kind of forgot I was floating until a new crew would come and they would be so excited about floating that I would think, ‘Oh, I guess we are floating, aren’t we?'”

She experienced the transition between Earth and space, which she described as “really neat,” faster on her return to Earth, she said. Unlike some astronauts after long-duration spaceflights, Koch found that her body quickly re-adapted to the pull of gravity.

“[For] a lot of people, because of the different nervous or vestibular system things and changes that go on in microgravity, when you’re re-adapting to one g and to Earth, you might experience some motion sickness and things like that. I am really fortunate in that I have not experienced that,” she said. “But what I have noticed is that my balance has taken a little while to get used to.”

“I did [also] notice for about a day that my neck was sore. I felt like a two-week-old in that I actually had to work hard to hold up my own head,” Koch said.

More striking than the physical changes, though, was her mental reaction to coming home.

“You see your mind wake up to the sensory experiences that define Earth and the things that are here,” Koch said. “You know, within the first two minutes of being back on Earth I saw more people’s faces than I had seen in a year.”

And it wasn’t just people who were waiting to greet her.

“The first thing that I did after I went home was to reunite with my dog, which was wonderful,” Koch said, noting that LBD, her “little brown dog,” was a rescue from the humane society. “I’m not sure who was more excited to see the other.”

“It’s just a symbol of coming back to the people and places that you love to see your favorite animal,” she said.

Another welcome sight were bowls and bowls of a particular snack food that she said she missed while in space.

“I was really lucky because I had a couple people provide gifts, so I came home to a kitchen full of chips and salsa, which was really exciting!” Koch said. “Even some homemade salsa from some of my neighbor’s friends. So it was really neat to see that people had kind of honed in on that and that the little things in life on Earth that we all take for granted were kind of the special things that I got to come home to.”

Koch returned home with gifts for her family and friends, too. “We take very, very little on the Soyuz, so everything went back in what would be the equivalent of about a shoe box and that was really enough to carry it all,” Koch said, replying to a question from collectSPACE.com about packing for the trip home. “The most important things to me that I brought to space were things from my friends and family, mementos that they can take with them and remember that I carried them with me and that they lived without them for a year while they were in my care and orbiting Earth.”

“So bringing those things back was probably my number one most important thing,” she said.