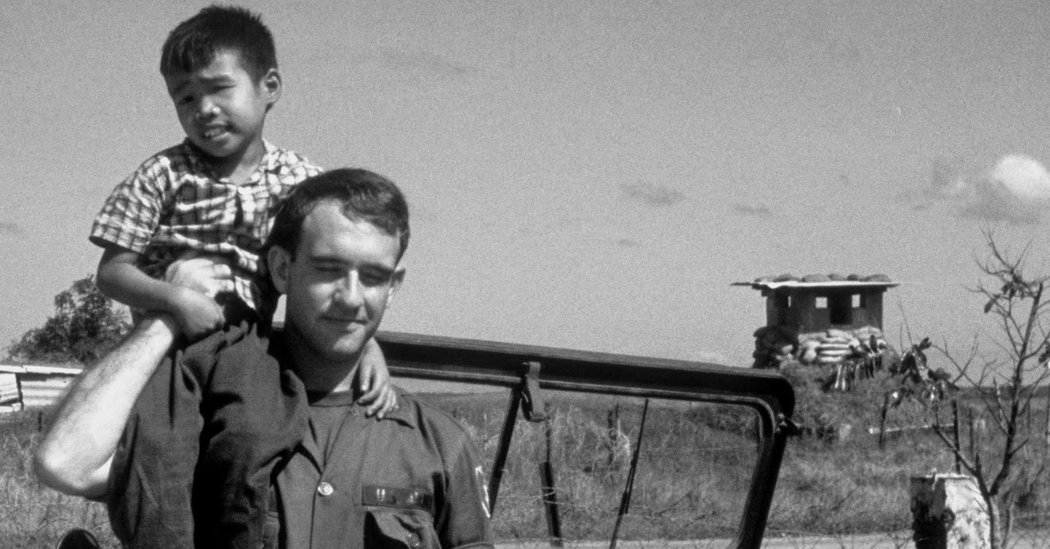 I was 26 when I was sent to Vietnam, along with 2.7 million men and women of my generation. As an infantry battalion surgeon, I cared for soldiers’ wounds and helped treat their pain — but for me, going to war was also tied to the distress of leaving my first love. I was a doctor and she was a licensed practical nurse at a hospital in Hartford, Conn. Our work had brought us together. Going to war would break us apart.

Medical school was the academic equivalent of military boot camp. My fellow hospital interns and I endured a draconian schedule that left us in a constant state of sleep-deprived exhaustion; we might enter the hospital on Thursday morning and not leave until early Saturday. At the end of a 48-hour shift on a cold December day in 1965, after back-to-back missed meals and a cluster of critical emergencies, I arrived on the third-floor ward for evening rounds. The young woman working at the nurse’s station asked if she could help me. Her badge said her name was Karen. She seemed sympathetic to my blank stare, ashen complexion and disheveled appearance — the typical symptoms of a house physician who was about to crash. I sensed her scrutinizing my movements as I wandered bleary-eyed from one patient’s room to the next.

I was exhausted and afraid of making a clinical error; Karen’s presence felt like a blessing. Hospital staff members sometimes enjoyed embarrassing younger physicians for sport, but her angelic smile, gentle manner and hint of shyness gave me the sense that she genuinely wanted to help rather than humiliate me. But there was a problem: I couldn’t stop watching her watching me. I was so attracted to her and so distracted that it was nearly impossible to stay on task. I knew nothing about Karen as a person — and I didn’t care. Intuition and impulse completely overwhelmed any pretense of reason. When our rounds were completed, we shared a few words over a quick cup of coffee. By the time we said goodbye, I was so captivated by her that I couldn’t think straight.

Now, more than 50 years later, I can’t recall exactly how I asked Karen out or what we did for a first date, but I do remember that we bonded immediately. I was on call in the hospital every weekday and many nights and weekends, so there was no time for traditional dating. Our courtship consisted of trying to stay awake, sharing takeout meals, watching some television, falling asleep, meeting covertly at work and spending one weekend at a modest Cape Cod resort. Snippets of quality time were used for cuddling, holding hands, looking into each other’s eyes, neatening a stray wisp of hair and occasionally making love. We spent a lot of time talking, but somehow we learned almost nothing of importance about each other. We just lived in the moment and enjoyed being together.

I had dated many women in the past, but this was the first time I had fallen in love. It was instantaneous, with someone I barely knew. And my timing was terrible. I had no savings, and I earned a paltry $70 for each 110-hour workweek. Worse, the war made it impossible to plan for my future. I hadn’t decided on a medical specialty yet, and I had foolishly pre-empted being drafted by enlisting in the Army. I could be sent to Vietnam as soon as my internship year was over.

In May 1966, I received orders to report for training in two months. I knew that general medical officers like me were sometimes embedded with front-line troops as battalion surgeons. I was facing the prospect of being injured or killed — but just as upsetting was the fact that my scheduled departure was close to the time that Karen’s handsome, varsity-athlete boyfriend would return from his Vietnam tour as a fighter pilot. Karen told me that they had not made a formal commitment to each other, but people who knew them assumed that they would eventually marry. If he returned while I was away, it seemed unlikely that our relationship could survive.

Army doctors received only four weeks of rudimentary military training in San Antonio before going overseas. Many would be deployed to Vietnam during their second year of active duty. I was part of the unlucky one-third who were issued olive-drab underwear to complement orders that sent us directly to Vietnam.

Our trainers’ focus was on teaching trauma and tropical medicine, with little emphasis on fighting skills. Watching doctors try to march in formation was very entertaining for the other troops stationed at our post. Unfortunately, some of us never took the nonmedical training seriously. One afternoon, we were instructed to crawl under barbed wire while live ammo with tracers was fired over our heads. They had to stop the exercise when a cardiologist suddenly stood up waving his white T-shirt over his head as if he were surrendering.

Doctors were being processed in such large numbers that I was housed in a dingy roadside motel. I missed Karen immediately, more than I had imagined. I considered asking her to marry me but never had the chance. She had agreed to visit me in Texas but canceled her flight at the last minute. Her sister told her it was unwise to commit to a soldier who might come back from the war irreparably damaged or irreversibly dead.

On Aug. 27, I was transported to Vietnam on a chartered commercial airplane. We stepped onto the tarmac into steamy heat, equipped with uniforms that had been designed for a war in Europe. Tropical fatigues and jungle boots were not in the regular supply chain yet. We were also unprepared in ways far more serious than just our gear.

My infantry unit was conducting search-and-destroy missions in Tay Ninh Province near the Cambodian border. “Search and destroy” sometimes seemed euphemistic for the Army using us as bait to lure enemy soldiers out of hiding. At 26, I was relatively old for my unit, and one of my 19-year-old medics jokingly called me Pops. My forward aid station was about 500 feet from the perimeter machine guns. I was the only one who seemed concerned that I had been issued an M16 rifle and a .45-caliber pistol but had virtually no weapons or combat training. Medical personnel were instructed to carry weapons in the field and to not wear the red cross insignia. Our command believed that we were specifically targeted by the Viet Cong. After the first few weeks, I carried only a holstered sidearm. It seemed more likely that I would injure myself or one of my buddies with my M16 than any of the enemy.

By late December, Karen’s romantic letters had gradually become less frequent. She had told her boyfriend about our hospital romance, and her anxiety and ambivalence about our relationship became more acute. Then, just after the new year, a sensitive but final letter of apology told me that she was engaged to be married that summer. This was not a surprise, but it was deeply disappointing. I loved her and wanted her to be happy, but I also wanted her with me, not with someone else. It seemed particularly ironic that the chaplain who performed her wedding ceremony was my drinking buddy, and the obstetrician who eventually delivered her babies was my intern partner and best friend.

I carried Karen’s photo for luck while I was in-country, but I no longer looked at it. It was time to move on from this failed relationship and focus on more immediate issues. My life and the lives of men in my unit were at risk, and I was responsible for treating life-threatening injuries with novice skills and little more than the contents of a medic’s bag. There was also the dilemma of knowing that each time I declared my patient well enough for duty, I might be writing a prescription for his death.

When I returned to the United States, I didn’t try to find out about Karen or her newly married life. It seemed inconceivable that our brief infatuation at the hospital had occurred just one year earlier. I started dating again and met the woman I would eventually marry and raise two children with.

More than four decades later, I came across an obituary that eulogized Karen’s ex-husband. He had retired as a brigadier general in the Air National Guard. They had been divorced for some time. I found Karen’s email address on social media and sent her a note, and we agreed to meet for lunch. (I was happily in a second marriage, and my wife, Sue, understood that this was an important time in my life and voiced no objections to the meeting.)

After some awkward conversation and a few glasses of wine, Karen and I talked about the time that had passed since we were together. We empathized with the highs, lows and complexities of each other’s life stories. I have had 40 deeply fulfilling years of clinical practice as a community pediatrician. I’ve been married to Sue for more than 20 years. I love my role as a grandfather, teach medical students as a clinical professor and actively campaign for the improvement of veterans’ health. Karen had left nursing when she married her boyfriend, but she went on to work in the office at an elementary school and loved being surrounded by children. She has two grown kids of her own and two grandchildren. Karen smiled when I admitted that she was the first woman I loved. I had never told her that in our brief time together. Simplicity seems almost impossible to achieve in today’s world, where everyone feels the need to learn everything about another person’s life; yet it was the ingredient that had made our infatuation so special. After revisiting old memories with Karen, I found myself imagining all the ways that a downed plane, an errant bullet, a hidden tripwire or even Karen’s conversation with her sister might have rewritten our stories’ endings.

The scars from the long-ago war and the years that followed had changed our lives and dampened the intensity but not the warmth of our feelings. Without speaking, we held each other for a long moment of reflection. I found myself, at 77, feeling the loss of that innocent first love. Then we wished each other happiness before drifting apart to embrace the lives we had chosen and the separate futures that lay before us.

Jeffrey Brown is a retired physician who teaches as a medical school professor. He has written several published books and many articles. While serving in Vietnam as an Army doctor, he was awarded the Bronze Star Medal for Valor.