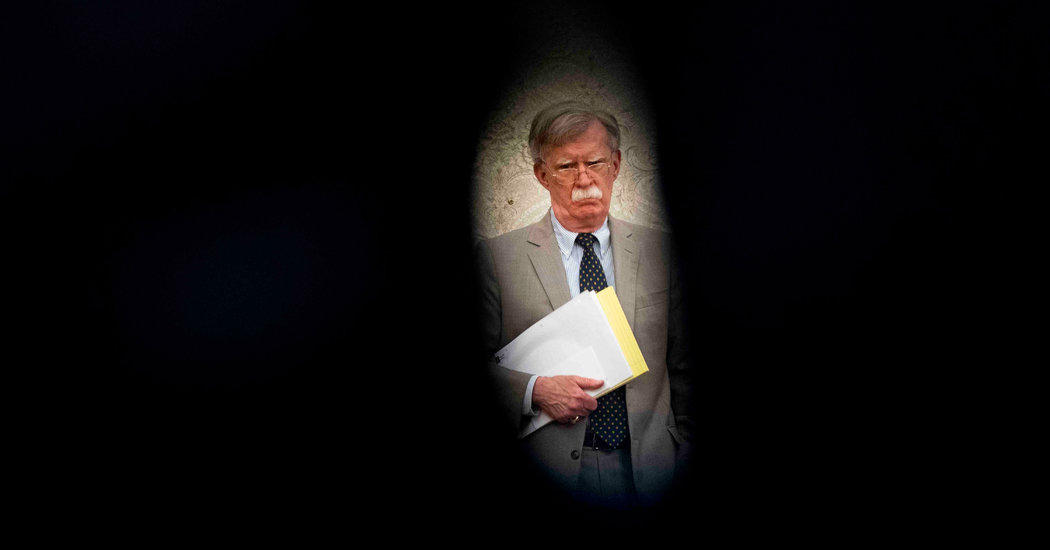 Thanks to a leak to the press, we all now know that John Bolton has written an explosive account of President Trump’s fateful decision to withhold hundreds of millions of dollars in security assistance from Ukraine. But it is far from clear how much of this story the public will be permitted to read, and when.

Like millions of others who once held a security clearance, Mr. Bolton, President Trump’s former national security adviser, is barred from publishing a book or blog post about his experience in government without first submitting it to official censors. As a result, what the public will see of Mr. Bolton’s account of malfeasance and corruption in the White House is, to a disturbing extent, up to the White House itself to decide.

The logic behind the requirement of prepublication review is easy to understand. Public servants with security clearances have access to classified information. The review system allows agencies like the Central Intelligence Agency and Defense Department to ensure that former employees who write books and other public materials don’t disclose secrets inadvertently. (Those who actually intend to disclose classified information don’t submit their manuscripts for government review, of course — and they can be prosecuted for revealing secrets.)

The system amounts to a prior restraint on speech, because it gives the agencies the chance to censor manuscripts before their publication. Though prior restraints are usually unconstitutional, including in the national security context, the government argues that they are justified because they are imposed through nondisclosure agreements signed by employees.

But as our organization, the Knight Institute, and the American Civil Liberties Union argue in a case before a federal court in Maryland, the review system is far more sweeping than the government’s argument admits, and lacks the limits and safeguards that courts have required of prior restraints in other contexts.

All 17 intelligence agencies now require prepublication review for at least some former employees, and in many agencies, even for those who never had access to classified information. Submission requirements are vague and confusing and leave former employees uncertain of their obligations.

Review standards are similarly difficult to pin down. There are no real deadlines. The agencies’ censors don’t usually explain their decisions. When they do, authors are afforded no meaningful opportunity to challenge them. Those who file lawsuits learn quickly that the courts almost always defer to the agencies’ decisions.

All this means that the prepublication review system provides government agencies with unchecked power to suppress speech. And as we and others have documented, the agencies frequently use their power not to protect national security secrets, but to protect officials from embarrassment, public scrutiny and accountability.

If the past is any guide, this is very likely how the White House will exploit the review system now. We have seen intimations of this already. Despite the obvious importance of Mr. Bolton’s account to the public’s understanding of Mr. Trump’s actions, the White House has not offered Mr. Bolton any assurance that his book will be reviewed quickly, or even before the publication date this spring.

The National Security Council’s records office, which is coordinating the review, apparently intends to scour the book not just for classified material but for information implicating executive privilege — a privilege that Mr. Trump and his lawyers have construed expansively in other contexts — though executive privilege is decidedly not a permissible basis for prior restraint. The White House has sent Mr. Bolton a letter expressly warning him against publishing the book.

Of course Mr. Bolton’s case is unusual, and it is possible that public and congressional pressure will force the White House to review his manuscript promptly and fairly. (Prominent Republicans, for their part, seem to be focused on persuading Mr. Bolton to “withdraw” his book, or failing that, on limiting the book’s audience to the senators hearing the impeachment case against Mr. Trump.)

But the spectacle of White House censors deciding, without any real constraint, whether to permit a former government official to publish a manuscript critical of the president should nonetheless provoke alarm.

The necessary changes to this process have been obvious for years: Prepublication review should apply to fewer people and fewer secrets. There should be narrower submission requirements, clearer censorship standards, enforceable deadlines and a meaningful right of judicial review. Mr. Bolton’s case surely underscores the urgency of these reforms.

It’s not just Mr. Bolton’s rights at issue here. Former government officials often have unique insights about the operation of government. When censors suppress these voices, they inflict a constitutional injury on the public as well. As Justice Sonia Sotomayor wrote for a unanimous Supreme Court in 2014, “Speech by public employees on subject matter related to their employment holds special value precisely because those employees gain knowledge of matters of public concern through their employment.”

Mr. Bolton is an unlikely standard-bearer for the public’s right to know, having worked at the highest levels of an administration notorious for its hostility to the First Amendment. But everyone who values an informed public, and an accountable government, should be troubled that the fate of Mr. Bolton’s book is in the hands of the White House, and that government censors have so much control over what we will read, and when we will read it.

Jameel Jaffer is the executive director of the Knight First Amendment Institute at Columbia. Ramya Krishnan is a staff attorney at the institute.