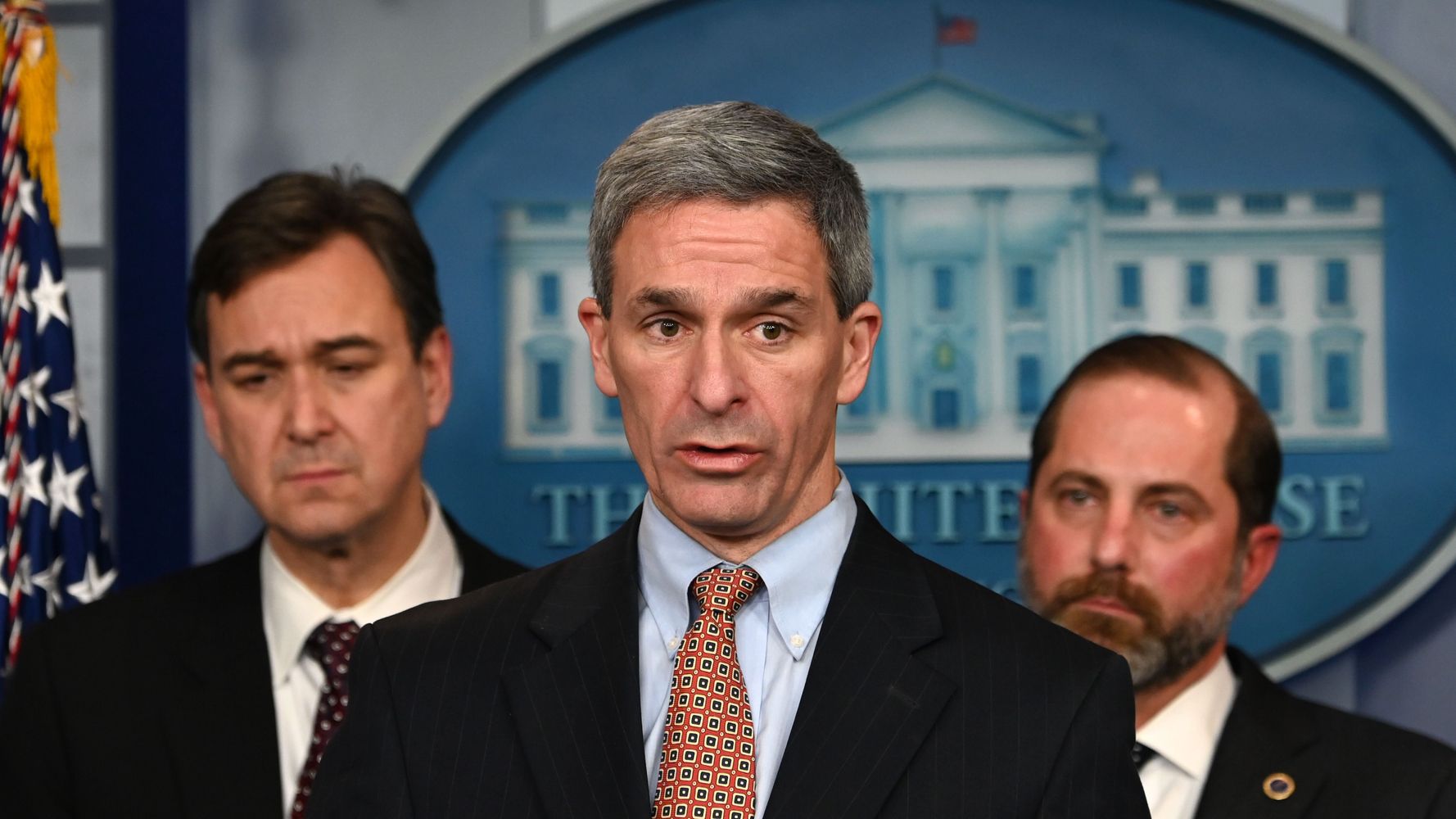 Washington (AP) — The United States on Friday declared a public health emergency because of a new virus that hit China and has spread to other nations.

Health and Human Services Secretary Alex Azar also announced that President Donald Trump will temporarily bar entry to the U.S. of foreign nationals believed to be a risk of transmitting the virus. The new restrictions begin Sunday afternoon.

“The risk of infection for Americans remains low and with these and our previous actions we are working to keep the risk low,” Azar said.

Americans returning from Hubei province, the center of the outbreak, will be required to undergo 14 days of quarantine. Others returning from elsewhere in China will be allowed to self-monitor their condition for a similar period.

The U.S. will also begin funneling all flights to the U.S. from China to seven major airports where passengers can be screened for illness.

The virus has infected almost 10,000 people globally in just two months, a troublesome sign that prompted the World Health Organization to declare the outbreak a global emergency. The death toll stood at 213, including 43 new fatalities, all in China.

The announcement came hours after the State Department issued a level 4 “Do Not Travel” advisory, the highest grade of warning, and told Americans in China to consider departing using commercial means. “Travelers should be prepared for travel restrictions to be put into effect with little or no advance notice,” the advisory said.

THIS IS A BREAKING NEWS UPDATE. AP’s earlier story follows below.

The U.S. advised against all travel to China as the number of cases of a worrying new virus spiked more than tenfold in a week, including the highest death toll in a 24-hour period on Friday.

The virus has infected almost 10,000 people globally in just two months, a troublesome sign of its spread that prompted the World Health Organization to declare the outbreak a global emergency. The death toll stood at 213, including 43 new fatalities, all in China.

The State Department’s level 4 “Do Not Travel” advisory, the highest grade of warning, told Americans in China to consider departing using commercial means. “Travelers should be prepared for travel restrictions to be put into effect with little or no advance notice,” the advisory said.

Hours later, Delta Air Lines and American Airlines announced they were suspending all flights between the U.S. and China, joining several international carriers that have stopped flying to China as the virus outbreak continues to spread.

Meanwhile, U.S. health officials issued a two-week quarantine order for the 195 Americans evacuated earlier this week from the Chinese city of Wuhan, the epicenter of the outbreak. It was the first time a federal quarantine has been ordered since the 1960s, when one was enacted over concern about potential spread of smallpox, the Centers for Disease Control and Prevention said.

“We understand this action may seem drastic. We would rather be remembered for over-reacting than under-reacting,” the CDC’s Dr. Nancy Messonnier said. None of the Americans being housed at a Southern California military base has shown signs of illness.

China counted 9,692 confirmed cases Friday, the vast majority in Hubei province and its provincial capital, Wuhan, where the first illnesses were detected in December.

The National Health Commission reported 171 cases have been “cured and discharged from hospital.” WHO has said most people who got the illness had milder cases, though 20% experienced severe symptoms. Symptoms include fever and cough, and in severe cases, shortness of breath and pneumonia.

China has placed more than 50 million people in the region under virtual quarantine, while foreign countries, companies and airlines have cut back severely on travel to China and quarantined those who recently passed through Wuhan. Infected people don’t show symptoms immediately and may be able to pass on the virus before they appear sick.

American Airlines said it was halting all flights starting Friday and running through March 27. Delta plans to wait until Feb. 6 to suspend China operations to help travelers in China leave the country. It said the stoppage will continue through April 30.

United Airlines announced that it will suspend flights to Beijing, Shanghai and Chengdu but continue flights to Hong Kong.

Since China informed WHO about the new virus in late December, at least 23 countries have reported cases, as scientists race to understand how exactly the virus is spreading and how severe it is.

Experts say there is significant evidence the virus is spreading among people in China and WHO noted with its emergency declaration Thursday it was especially concerned that some cases abroad also involved human-to-human transmission. It defines an international emergency as an “extraordinary event” that poses a risk to other countries and requires a coordinated international response.

“The main reason for this declaration is not because of what is happening in China but because of what is happening in other countries,” WHO Director-General Tedros Adhanom Ghebreyesus told reporters in Geneva. “Our greatest concern is the potential for this virus to spread to countries with weaker health systems which are ill-prepared to deal with it.

A declaration of a global emergency typically brings greater money and resources, but may also prompt nervous governments to restrict travel and trade to affected countries. The announcement also imposes more disease reporting requirements on countries.

On Friday, the U.S. Embassy in Beijing said it was authorizing the departure of family members and all non-emergency U.S. government employees from Beijing and the consulates in the cities of Chengdu, Guangzhou, Shanghai, and Shenyang. Staff from the Wuhan consulate departed earlier this week.

The decision was made “out of an abundance of caution related to logistical disruptions stemming from restricted transportation and availability of appropriate health care,” the embassy said.

Mike Wester, a businessman in Beijing who has lived in China for 19 years, said he has no plans to leave.

“I feel safer self-quarantining myself here at home than I do risking travel,” Wester said.

He pointed to potential risks from crowds at airports and being required to remove a mask for passport and security checks.

Japan and Germany also advised against non-essential travel and Britain did as well, except for Hong Kong and Macao. Popular holiday and shopping destination Singapore barred Chinese from traveling there, becoming the first Southeast Asian nation to do so.

Tedros said WHO was not recommending limiting travel or trade to China.

“There is no reason for measures that unnecessarily interfere with international travel and trade,” he said. He added that Chinese President Xi Jinping had committed to help stop the spread of the virus beyond its borders.

Although scientists expect to see limited transmission of the virus between people with close contact, like within families, the instances of spread to people who may have had less exposure to the virus is worrying.

In Japan, a tour guide and bus driver became infected after escorting two tour groups from Wuhan. In Germany, five employees of a German auto parts supplier became ill after a Chinese colleague visited, including two who had no direct contact with the woman, who showed no symptoms of the virus until her flight back to China. On Friday, Germany confirmed a sixth case, a child of one of the people already infected.

“That’s the kind of transmission chain that we don’t want to see,” said Marion Koopmans, an infectious diseases specialist at Erasmus University Medical Center in the Netherlands and a member of WHO’s emergency committee.

The new virus has now infected more people globally than were sickened during the 2002-2003 outbreak of SARS, or severe acute respiratory syndrome, a cousin of the new virus. Both are from the coronavirus family, which also includes those that can cause the common cold.

This story corrects the number of cases in China that have been cured and discharged to 171, not 596.