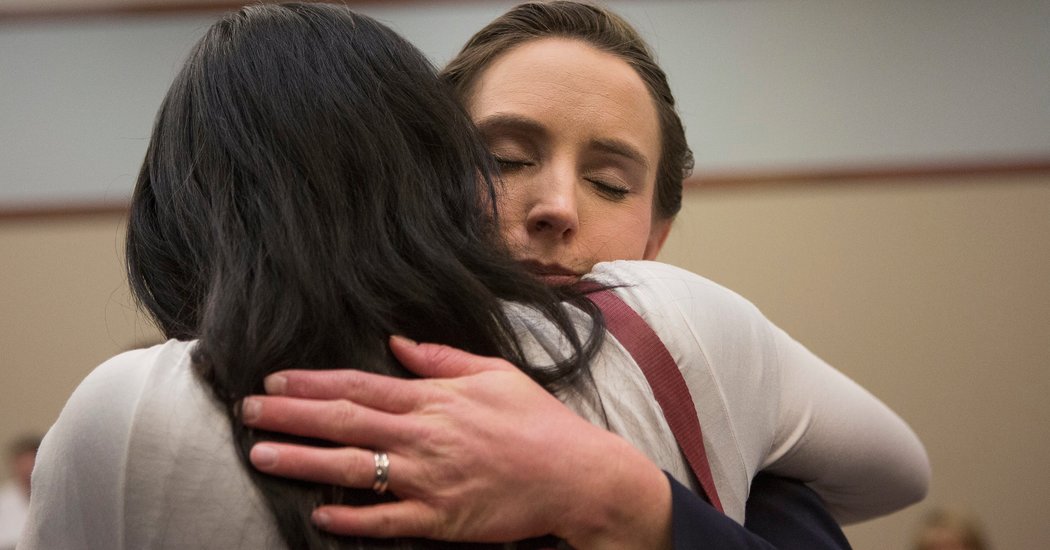 More than 300 plaintiffs, including Olympic gymnasts, have sued U.S.A. Gymnastics for failing to protect them from Mr. Nassar, who was sentenced in 2018 to 40 to 125 years in prison for abusing girls at a gymnastics facility under the guise of medical treatment.

Reeling from the scandal, U.S.A. Gymnastics, the sport’s governing body, filed for bankruptcy in 2018. The offer it extended to Mr. Nassar’s accusers was made as part of a reorganization plan filed in federal bankruptcy court for the Southern District of Indiana.

But its prospects for approval appear dim. John C. Manly, a lawyer who represents more than 200 athletes who accused Mr. Nassar, including the Olympic gymnasts Aly Raisman and McKayla Maroney, criticized the offer, saying it is “not just unworkable, it is unconscionable.”

“I’m not in a position to reject it, but in speaking to my clients and other lawyers, there’s a better chance of Donald Trump endorsing Bernie Sanders than the victims accepting this offer,” Mr. Manly said Thursday.

Under the plan, U.S.A. Gymnastics offered the women two options: They could vote as a group to accept the $215 million or vote to continue to pursue their lawsuits and collect judgments from U.S.A. Gymnastics’ insurance policies.

If they accept the settlement, U.S.A. Gymnastics said, the insurers for Twistars Gymnastics Club will contribute an additional $2.125 million. The club, outside of Lansing, Mich., is where Mr. Nassar abused girls between September 2009 and September 2011.

The plan also included benchmarks to ensure that U.S.A. Gymnastics improves athlete safety and provided for payments to the organization’s other creditors. If approved, the plan would allow U.S.A. Gymnastics to emerge from bankruptcy.

The offer comes nearly two years after Michigan State University reached a $500 million settlement with victims of Mr. Nassar’s abuse. Mr. Nassar worked for the university for about 20 years, and the settlement was believed to be the largest ever reached in a sexual abuse case involving an American university.

“It has always been our goal to reach a consensual settlement agreement with all of our creditors through the bankruptcy process,” Li Li Leung, president and chief executive of U.S.A. Gymnastics, said in a statement on Thursday. “While we do not yet have an agreement with the committee representing the survivors, we still hope to reach an agreement.”

She said the offer represented the two options available “based on the amount of money U.S.A. Gymnastics’ insurers are willing to pay into a settlement fund.”

Mr. Manly said the plan did not fundamentally change the culture at U.S.A. Gymnastics or the United States Olympic and Paralympic Committee. He called the payment akin to the amount reached in a car crash settlement, not a case involving the hundreds of sexual assaults that he said Mr. Nassar had been accused of committing.

Mr. Manly said that the offer suggested that the Olympic committee “doesn’t take the sexual abuse of athletes seriously and, frankly, that’s how Larry Nassar was able to do what he did so long.”

U.S.A. Gymnastics said the plan gave the victims access to the full value of its insurance policies, which are the only assets available to pay their claims. The money would be distributed to them by a trustee, following an approach that was used in the Michigan State case and other abuse cases, the organization said.

U.S.A. Gymnastics has been roundly criticized for its handling of the scandal. In July, a Senate investigation found that U.S.A. Gymnastics and the United States Olympic and Paralympic Committee “knowingly concealed” Mr. Nassar’s abuse.

The investigation described “alarming and dysfunctional systems” that allowed emotional, physical and sexual abuse to persist in sports including gymnastics, swimming, figure skating and taekwondo.

The report prompted senators to push for more stringent legal accountability for Olympic and athletic governing bodies that fail to protect athletes.

Kathryn Carson, the chairwoman of U.S.A. Gymnastics, said the governing body filed for bankruptcy to “hold our organization accountable to the survivors by enabling a resolution process that would compensate them for their claims.”

“Our strong preference remains to achieve a fully consensual settlement plan and we intend to continue negotiations with the survivors and our insurance carriers to reach that goal,” she said.