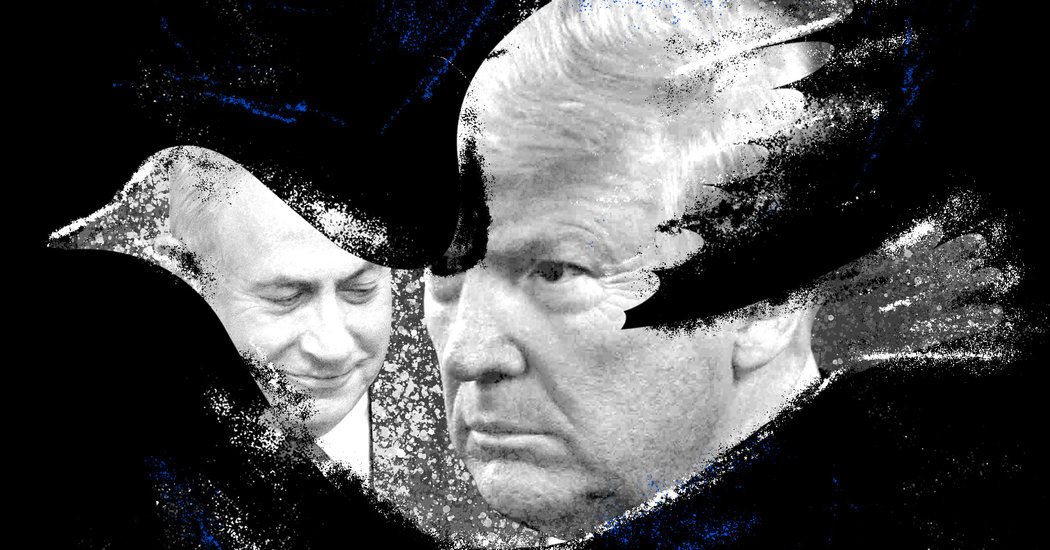 Of the many proposals for an Israeli-Palestinian peace rolled out over the decades, circumstances made the one President Trump announced on Tuesday the hardest to take seriously.

While Mr. Trump outlined what he described as his “vision” for a Mideast peace in the gilded East Room of the White House to waves of applause from a selected audience, his impeachment trial was droning on in the Capitol. And as Prime Minister Benjamin Netanyahu of Israel, standing by his side, proclaimed Mr. Trump “the greatest friend Israel has ever had in the White House,” Israel was reverberating from Mr. Netanyahu’s surprising decision to drop his request for immunity and to face trial on three corruption charges.

From all appearances, the “deal of the century,” as it was touted, seemed nothing more than a cynical attempt at a diversion by two politicians in trouble, a sop to their right-wing bases as each leader vies for re-election — Mr. Netanyahu in early March, Mr. Trump in November. A chorus of analysts declared the deal dead on arrival and worse, an American abdication of any mediating role in the future.

Yet the conflict has gone on too long, with too much suffering, to dismiss any new initiative out of hand. The “Vision to Improve the Lives of the Palestinian and Israeli People,” as it was styled, had been in gestation for nearly three years, and Mr. Trump’s negotiators — his son-in-law, Jared Kushner, and his former business lawyer Jason Greenblatt — had extensively consulted with Arab leaders, who would be needed to push the Palestinian Authority president, Mahmoud Abbas, back to the negotiating table.

On its surface, the plan appears to build on the peace plans of yore. It revives the moribund two-state solution, and it covers all the major issues — Israel’s security, Jerusalem, the settlements, the right of return for Palestinian refugees and a $50 billion aid package for the Palestinians if they sign on, presumably financed by oil-rich Arabs recruited by Mr. Trump. And by calling it a “vision” rather than a “road map” or “peace plan,” Mr. Trump suggested, constructively, that it was open to the sort of bargaining at which he professes to be a genius.

This could well be “the last opportunity” for their own state that the Palestinians will ever have, as Mr. Trump warned, or at least the makings of the best deal they can expect. Given the plight of the Palestinian people and their historic claims to land, that may not be a just outcome, but it is perhaps becoming the realistic one. Outmaneuvered by successive Israeli governments, depleted, divided, disastrously led and at risk of being shrugged aside by some longtime Arab allies, the Palestinians are running out of options.

Yet this deal would be hard for even the most pragmatic and exhausted of Palestinians to accept. Mr. Trump may believe he’s offering a deal they ultimately can’t refuse, but, of course, they can, and it is hard to see how that outcome would benefit Israel, either, in the long term. It takes only a glance at the map of the proposed Palestinian “state,” and at some details of the plan, to see that it would not be much of a state at all. It would be a patchwork of ethnic islands, purportedly to be connected by bridges, roads and tunnels, all subject to security requirements, as defined by Israel. It would be, in other words, quite like what exists already.

Mr. Trump’s plan effectively grants Israel the right to annex nearly all Israeli settlements and the Jordan Valley. How likely that element of the plan was to be subject to good-faith negotiation with the Palestinians was suggested when Mr. Netanyahu promptly said he’d ask his cabinet to approve the annexations this weekend, although that move might be on hold. Under the terms of the plan, Israel is subject to a freeze on new settlement construction — at least, outside the existing blocs — for the next four years. Whether Israel abides by that constraint — and if it doesn’t, whether Mr. Trump attempts to enforce it — will be one test of the seriousness of this effort.

The Palestinians are allotted far less land in the Trump scheme than in any previous proposal. In exchange for the land it would annex, Israel would cede some land, including possibly transferring an area of central Israel where Arab citizens of Israel live. This is a step long favored by Israeli nationalists as a means of sharply reducing the number of Arab citizens of Israel.

The whole of Jerusalem is granted to Israel, while the Palestinians are given the right to create a capital in outlying neighborhoods. The “state” the proposal outlines would effectively remain under the oversight of the Israeli military, and it would be created only at the end of that four-year period if the Palestinians met a set of stringent conditions. Israel would decide whether the conditions had been met, effectively giving Israel an indefinite veto over statehood.

Throughout, the plan reflects Mr. Trump’s embrace of the wishes of Israeli nationalists and his Jewish and evangelical donors, and a disdainful attitude toward the Palestinians. Though past peace plans all accepted Israel’s need to secure its borders and prevent an armed state from arising alongside it, they sought to fashion face-saving arrangements, such as letting Israel “lease” rather than annex territory.

For all its careful deliberations of the details, the plan hardly seems to hold out any real hope for meaningful Palestinian sovereignty or real improvement in their people’s condition.

None of this should come as a surprise following Mr. Trump’s earlier unilateral decisions to move the American Embassy from Tel Aviv to Jerusalem, to recognize Israeli sovereignty over the Golan Heights and to declare the West Bank settlements legal under international law — all actions that reversed decades of American policy and renounced any semblance of evenhandedness. Mr. Netanyahu was hard put to conceal his glee as he declared his unequivocal acceptance of the “vision.”

It didn’t have to come to this. When Mr. Trump entered the White House and assigned Mr. Kushner to take on the “toughest deal” of them all, even the Palestinians were intrigued. A lasting agreement had eluded the strenuous efforts of successive administrations, Democratic and Republican, and the two-state solution long accepted as the goal seemed dead in the water. A senior Palestinian official suggested at the time that, just maybe, Mr. Trump’s background and unorthodox ways might be what was needed to break the deadlock. In May 2017, the president received Mr. Abbas at the White House, and a month later Mr. Trump delayed moving the American Embassy to Jerusalem to improve the chances of a deal.

That all changed as Mr. Trump’s presidency became increasingly polarizing, chaotic and embattled. In December 2017 the president signaled a major shift when he announced that the embassy would move and that Jerusalem, a central source of dispute between Jews and Arabs that had always been treated as a key point for compromise in any peace, was now “off the table.” When Mr. Abbas and the Palestinians reacted in fury and cut contact with Washington, Mr. Trump cut almost all American aid to the Palestinians. From then on, the plan was shaped with no input from the Palestinian side.

The rollout of the plan, however, was delayed when Mr. Netanyahu’s government fell apart and, in two elections, neither Mr. Netanyahu nor his main challenger, Benny Gantz of the Blue and White coalition, won enough seats in Parliament to form a government. A third election was scheduled for March 2. Then came Mr. Netanyahu’s indictment.

For his part, Mr. Trump, facing the impeachment trial, could use something to rally his supporters and create the aura of a statesman. The stage was set for the show in the East Room.

The timing of this announcement, combined with the disregard for Palestinian interests and Mr. Trump’s poor record of follow-through on bold proposals (see: North Korea), does not augur a period of vigorous multilateral negotiation toward a true peace. Nor do the political travails of the American and Israeli leaders. Understandably, Mr. Trump and Mr. Netanyahu did not choose to mention the specters of impeachment and criminal indictment during the East Room ceremony. It’s a safe bet that neither grasped that by exploiting something as consequential as the Israel-Palestinian conflict for a political fix they only underlined the misuse of power of which they both stand accused.