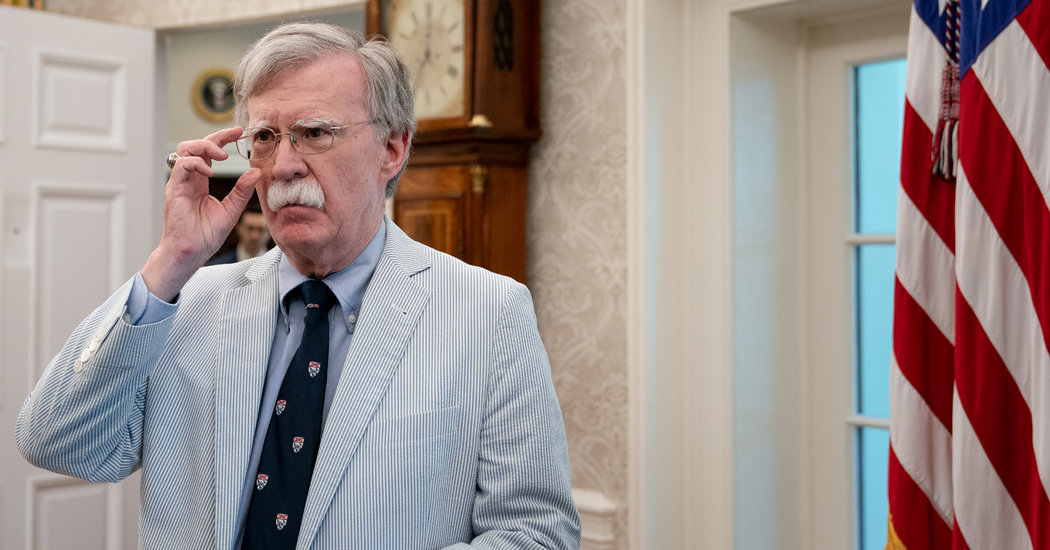 WASHINGTON — More than two months before he asked Ukraine’s president to investigate his political opponents, President Trump directed John R. Bolton, then his national security adviser, to help with his pressure campaign to extract damaging information on Democrats from Ukrainian officials, according to an unpublished manuscript by Mr. Bolton.

Mr. Trump gave the instruction, Mr. Bolton wrote, during an Oval Office conversation in early May that included the acting White House chief of staff, Mick Mulvaney, the president’s personal lawyer Rudolph W. Giuliani and the White House counsel, Pat A. Cipollone, who is now leading the president’s impeachment defense.

Mr. Trump told Mr. Bolton to call Volodymyr Zelensky, who had recently won election as president of Ukraine, to ensure Mr. Zelensky would meet with Mr. Giuliani, who was planning a trip to Ukraine to discuss the investigations that the president sought, in Mr. Bolton’s account. Mr. Bolton never made the call, he wrote.

The previously undisclosed directive that Mr. Bolton describes would be the earliest known instance of Mr. Trump seeking to harness the power of the United States government to advance his pressure campaign against Ukraine, as he later did on the July call with Mr. Zelensky that triggered a whistle-blower complaint and impeachment proceedings. House Democrats have accused him of abusing his authority and are arguing their case before senators in the impeachment trial of Mr. Trump, whose lawyers have said he did nothing wrong.

The account in Mr. Bolton’s manuscript portrays the most senior White House advisers as early witnesses in the effort that they have sought to distance the president from. And disclosure of the meeting underscores the kind of information Democrats were looking for in seeking testimony from his top advisers in their impeachment investigation, including Mr. Bolton and Mr. Mulvaney, only to be blocked by the White House.

In a statement after this article was published, Mr. Trump denied the discussion that Mr. Bolton described.

“I never instructed John Bolton to set up a meeting for Rudy Giuliani, one of the greatest corruption fighters in America and by far the greatest mayor in the history of N.Y.C., to meet with President Zelensky,” Mr. Trump said. “That meeting never happened.”

In a brief interview, Mr. Giuliani denied that the conversation took place and said those discussions with the president were always kept separate. He was adamant that Mr. Cipollone and Mr. Mulvaney were never involved in meetings related to Ukraine.

“It is absolutely, categorically untrue,” he said.

Neither Mr. Bolton nor a representative for Mr. Mulvaney responded to requests for comment.

Mr. Bolton described the roughly 10-minute conversation in drafts of his book, a memoir of his time as national security adviser that is to go on sale in March. Over several pages, Mr. Bolton laid out Mr. Trump’s fixation on Ukraine and the president’s belief, based on a mix of scattershot events, assertions and outright conspiracy theories, that Ukraine tried to undermine his chances of winning the presidency in 2016.

As he began to realize the extent and aims of the pressure campaign, Mr. Bolton began to object, he wrote in the book, affirming the testimony of a former National Security Council aide, Fiona Hill, who had said that Mr. Bolton warned that Mr. Giuliani was “a hand grenade who’s going to blow everybody up.”

Mr. Trump also repeatedly made national security decisions contrary to American interests, Mr. Bolton wrote, describing a pervasive sense of alarm among top advisers about the president’s choices. Mr. Bolton expressed concern to others in the administration that the president was effectively granting favors to autocratic leaders like Recep Tayyip Erdogan of Turkey and Xi Jinping of China.

The New York Times reported this week on another revelation from Mr. Bolton’s book draft: that Mr. Trump told him in August that he wanted to continue freezing $391 million in security assistance to Ukraine until officials there helped with investigations into Democrats including former Vice President Joseph R. Biden Jr. and his son Hunter. That account undercuts a key element of the White House impeachment defense — that the aid holdup was separate from his requests for inquiries. Mr. Trump has denied the conversation took place.

Since that Times article, people who have reviewed the draft have further described its contents, including details of the May meeting. Mr. Bolton’s manuscript was sent to the White House for a standard review process in late December.

Its revelations galvanized the debate over whether to call witnesses in the impeachment trial, but late on Thursday, Republicans appeared to have secured enough votes to keep any new testimony out of Mr. Trump’s trial and to move toward a quick acquittal in the third presidential impeachment trial in American history.

The White House has sought to block the release of the book, contending that it contains classified information. The government reviews books by former officials who had access to secrets so they can excise the manuscripts of any classified information. Officials including Mr. Trump have described Mr. Bolton, who was often at odds with Mr. Pompeo and Mr. Mulvaney, as a disgruntled former official with an ax to grind.

Mr. Bolton has angered Democrats — and some Republicans — for remaining quiet during the House investigation, then announcing that he would comply with any subpoena to testify in the Senate and signaling that he is eager to share his story. Administration officials should “feel they’re able to speak their minds without retribution,” he said at a closed-door lunch in Austin, Texas, on Thursday, the NBC affiliate KXAN reported, citing unnamed sources.

“The idea that somehow testifying to what you think is true is destructive to the system of government we have — I think, is very nearly the reverse, the exact reverse of the truth,” Mr. Bolton added.

The Oval Office conversation that Mr. Bolton described came as the president and Mr. Giuliani were increasingly focusing on pushing the Ukrainian government to commit to investigations that could help Mr. Trump politically. At various points, Mr. Trump, Mr. Giuliani and their associates pressed Ukrainian officials under Mr. Zelensky and his predecessor to provide potentially damaging information on the president’s rivals, including Mr. Biden and Ukrainians who Mr. Trump’s allies believed tried to help Hillary Clinton in 2016.

Mr. Giuliani had just successfully campaigned to have the American ambassador to Ukraine, Marie L. Yovanovitch, recalled, convinced that she was part of an effort to protect Mr. Trump’s political rivals from scrutiny. Mr. Giuliani had argued she was impeding the investigations.

At the time of the Oval Office conversation Mr. Bolton wrote about, Mr. Giuliani was planning a trip to Kyiv to push the incoming government to commit to the investigations. Mr. Giuliani asserted that the president had been wronged by the Justice Department’s Russia investigation and told associates that the inquiry could be partly discredited by proving that parts of it originated with suspect documents produced and disseminated in Ukraine to undermine his onetime campaign chairman, Paul Manafort, whose work in Ukraine became a central focus of the Russia inquiry.

Mr. Giuliani, a private consultant with a range of international clients, had said none were involved in the Ukraine effort, Mr. Bolton wrote, adding that he was skeptical and wanted to avoid involvement. At the time, Mr. Giuliani was working closely with two Soviet-born businessmen from Florida, Lev Parnas and Igor Fruman, to carry out the shadow Ukraine effort.

After pushing out Ms. Yovanovitch, Mr. Giuliani turned his attention to other American diplomats responsible for Ukraine policy. During the Oval Office conversation, he also mentioned a State Department official with the last name of Kent, whom Mr. Bolton wrote he did not know. Mr. Giuliani said he was hostile to Mr. Trump and sympathetic to George Soros, the billionaire philanthropist who has long been a target of the far right.

Mr. Bolton left the Oval Office after 10 minutes and returned to his office, he wrote. Shortly after, two aides came into his office, saying Mr. Trump had sent them out of a separate meeting on trade to ask about Mr. Kent, Mr. Bolton wrote.

Around the time of the May discussion, The Times revealed Mr. Giuliani’s efforts and his planned trip to Ukraine. Mr. Giuliani said at the time that Mr. Trump was aware of his efforts in Ukraine, but said nothing else about any involvement of Mr. Trump or other members of the administration. The disclosure created consternation in the White House and Mr. Giuliani canceled his trip.

A day after the Times article was published, Mr. Giuliani wrote a letter to Mr. Zelensky, saying he was representing Mr. Trump as a “private citizen” and, with Mr. Trump’s “knowledge and consent,” hoped to arrange a meeting with Mr. Zelensky in the ensuing days. That letter was among the evidence admitted during the House impeachment inquiry.