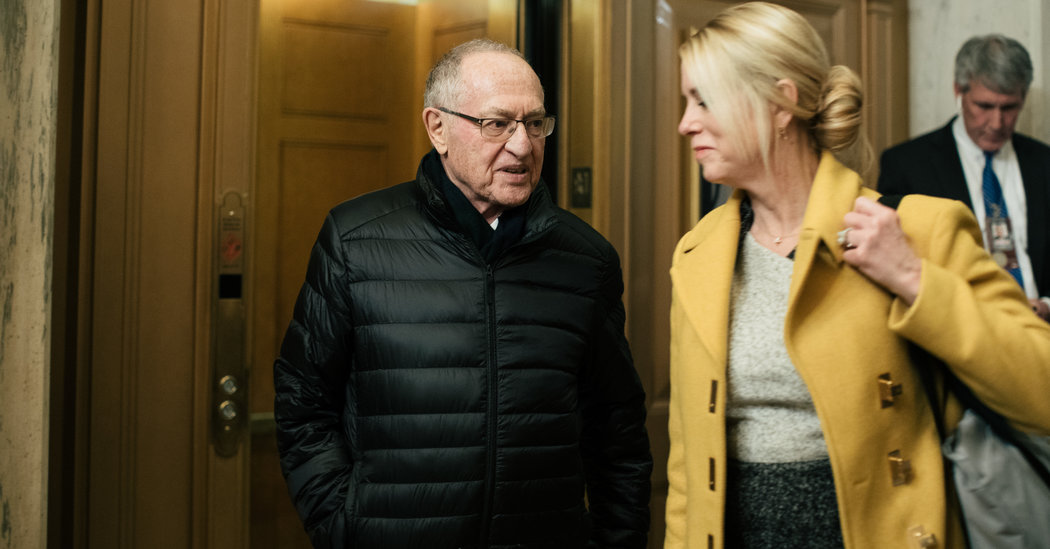 WASHINGTON — When a lawyer for President Trump suggested to senators this week that whatever a president does in pursuit of re-election is inherently in the public’s interest, the moment crystallized fears among some of Mr. Trump’s critics about creeping presidential autocracy.

“If a president does something which he believes will help him get elected in the public interest, that cannot be the kind of quid pro quo that results in impeachment,” said the lawyer, Alan M. Dershowitz. He sought on Thursday to clarify or walk back his remarks, saying on Twitter that they were mischaracterized.

But the wave of outrage underscored how the politics of the Trump era — and his lawyers’ efforts to help Mr. Trump advance his agenda and defend himself from scrutiny — have become infused with concerns about executive power overreach.

The constitutional system is built on the idea that each of the three branches of government depends upon and is accountable to the others, said Peter Shane, an Ohio State University law professor and co-author of a separation-of-powers casebook, but an accumulating pattern of claims and actions by the Trump administration has called that into doubt.

“What is scary about Trump’s view of executive power is that he tries to do as much as he can without the sanction of Congress, and to resist oversight by the other branches,” Mr. Shane said. “Put all that together and you get a picture of an executive branch in which all activity is subject to the whim of the president, and how that whim is exercised cannot be effectively checked.”

The list of ways in which Mr. Trump and his legal team have pushed limits is growing.

In the Ukraine affair, his lawyers have argued that nothing is impeachable or illegal about using his official powers to coerce a weak ally to announce a corruption investigation into a domestic political rival, and the Senate’s Republican majority will likely vote to acquit him.

Along the way, Mr. Trump’s legal team came up with a theory by which the executive branch could lawfully withhold from Congress a whistle-blower complaint that an inspector general had deemed an “urgent concern.” A law says that the administration “shall” disclose such a complaint to lawmakers.

And before the Ukraine affair came to light, lawyers in the White House budget office developed a legal theory that Mr. Trump had constitutional authority to withhold congressionally mandated military aid from Ukraine, overriding the Anti-Impoundment Act. They never activated that theory, since he released the aid after the whistle-blower filed his complaint.

The president’s edgy views of executive power did not start with Ukraine. Mr. Trump himself has repeatedly claimed that Article II of the Constitution, which creates the presidency, gives him “the right to do whatever I want.”

He has said he could pardon himself and vowed to systematically stonewall “all” congressional subpoenas.

Mr. Trump broke with a long-held norm by personally ordering an investigation into the Russia investigators, and he repeatedly tried to impede the special counsel inquiry, boasting that he has “an absolute right to do what I want to with the Justice Department.”

After William P. Barr, a longtime believer in a maximalist interpretation of presidential power, privately provided the Trump administration with a legal theory by which obstruction of justice laws do not apply to presidents who abuse their power over the Justice Department, Mr. Trump appointed him attorney general.

In domestic policy, Mr. Trump has pushed the limits of emergency powers laws to claim a right to spend more taxpayer money on a border wall with Mexico than Congress was willing to appropriate. In foreign policy, he launched strikes at the Syrian government without permission from Congress, and nearly brought the country to war with Iran by killing a senior Iranian general without consulting lawmakers.

Against the backdrop of all this and more, critics of Mr. Trump seized on Mr. Dershowitz’s remarks. The leader of the House impeachment managers, Representative Adam Schiff, Democrat of California, told the Senate on Thursday that Mr. Trump’s team had embraced the vision of a presidency that exists above the law — “when the president does it, that means it is not illegal” — that Richard Nixon famously articulated to defend his conduct after Watergate.

“We are right back to where we were a half-century ago — and I would argue we may be in a worse place because this time, this time that argument may succeed,” Mr. Schiff said, accusing Trump defenders of embracing “the normalization of lawlessness” by a president.

Mr. Dershowitz did not attend the impeachment trial on Thursday, but another member of the president’s defense team, Patrick Philbin, also distanced himself from the impression Mr. Dershowitz had left.

On Twitter, Mr. Dershowitz said that the intended meaning of his remarks the previous evening, which circulated widely on social media and aired repeatedly on television, had been distorted.

“They characterized my argument as if I had said that if a president believes that his re-election was in the national interest, he can do anything,” Mr. Dershowitz wrote. “I said nothing like that, as anyone who actually heard what I said can attest.”

At least one part of Mr. Dershowitz’s self-defense seemed accurate. Some Democratic senators and other critics accused him of suggesting that even Nixon was not impeachable, despite his clear crimes. But that accusation is incompatible with Mr. Dershowitz’s main argument: that an impeachable “high crime and misdemeanor” requires an indictable offense.

(His embrace of that view was itself disputed. It cuts against the view of most legal scholars, and he himself said in 1998 that he thought a “technical crime” was not required to impeach a president who abuses power. He has since disavowed that view, saying he changed his mind after research.)

But the context of Mr. Dershowitz’s view that abuse of power, absent an indictable crime, is not impeachable provides a guide for sorting through his inflammatory remarks, which were muddled in places.

Mr. Dershowitz made his remarks in response to a question posed by a Republican senator about whether quid pro quos are routine in foreign policy. The president’s defense team has repeatedly pointed out that administrations commonly withhold assistance as leverage to induce another country to take some step.

The talking point elides the distinction between a president who is trying to achieve some public policy goal and one who is trying to obtain a personal benefit. In his answer, Mr. Dershowitz appeared to be attempting to rebut that objection, including by arguing that a president may have more than one motivation for acting.

Specifically, he was arguing against the idea that presidents can be impeached for otherwise lawful actions if they are motivated by gaining personal political benefits rather than serving the public interest. One reason this would be folly, he maintained, was that often both motivations will simultaneously exist.

(Mr. Trump’s legal team has argued that he had a sincere interest in fighting corruption in Ukraine. House impeachment managers have scoffed at that notion and portrayed him as solely motivated by a desire to manufacture a basis to smear a political rival as corrupt.)

But as he riffed, Mr. Dershowitz went further than merely observing that presidents routinely think about public opinion — that is, voter sentiments — as well as the public good when they weigh potential actions.

He also collapsed any distinction between those two motives by saying that politicians often justifiably believe that their re-election would serve the public interest. That part of his remarks went viral.

But the larger context was that under Mr. Dershowitz’s theory, even a president who nakedly abuses power, without any reference to the purported public good, cannot be impeached — so long as there is no indictable offense.

On Thursday, Mr. Dershowitz emphasized that he was not trying to communicate that presidents wield unfettered power when they are trying to get re-elected.

“Let me be clear once again (as I was in the Senate): a president seeking re-election cannot do anything he wants,” Mr. Dershowitz wrote on Twitter. “He is not above the law. He cannot commit crimes.”

But, he argued, a lawful act “does not become unlawful or impeachable if done with a mixed motive of both promoting the public interest and helping his RE-election.”