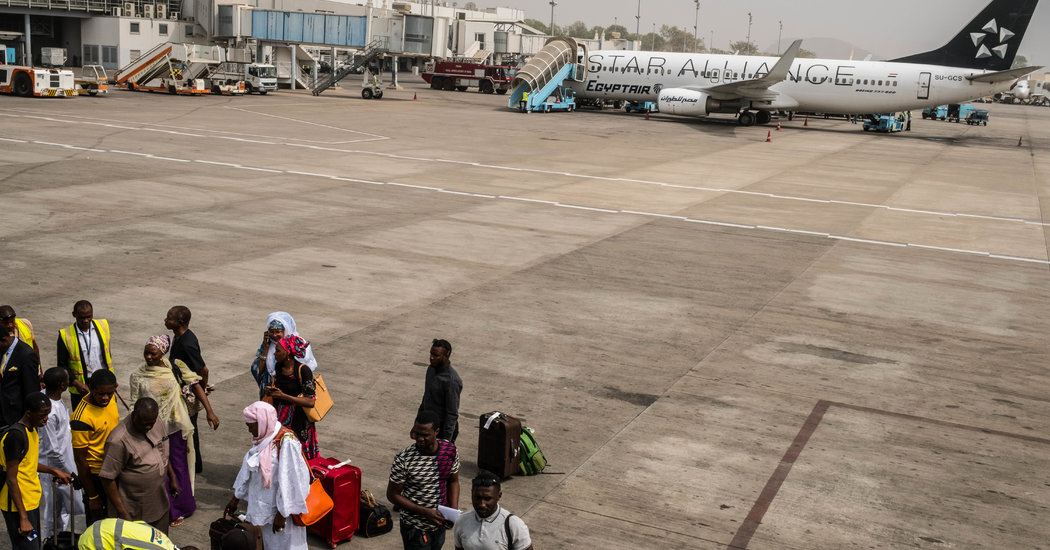 WASHINGTON — The Trump administration on Friday added six countries to the nations facing stringent travel restrictions, virtually blocking immigration from Africa’s most populous nation, Nigeria, and from Myanmar, where refugees are fleeing genocide.

Beside Nigeria, varying degrees of restrictions will hit three other African countries, Eritrea, Sudan and Tanzania, and one former Soviet state, Kyrgyzstan. Myanmar’s Muslim Rohingya could also be caught in the crossfire. The total number of countries on the restricted travel list now stands at 13.

Immigrant visas, issued mostly to foreigners intending to live in the United States, will be banned from Nigeria, Myanmar, Eritrea and Kyrgyzstan. The ban would prevent immigrants from Sudan and Tanzania from obtaining diversity visas. Homeland Security and State Department officials said some immigrants would be able to obtain waivers from the restrictions.

The proclamation, which President Trump was expected to sign on Friday, will take effect on February 22.

The administration has argued that the ban, enacted in 2017 to restrict travel from Muslim-majority countries, is necessary to ensure that countries satisfy security requirements for travel into the United States, or face restrictions until they do.

The expansion of the restrictions, which already affected more than 135 million people in seven countries, is likely to hinder more than 12,300 potential immigrants from resettling in the United States or reuniting with their family. The effect on Nigeria, not only Africa’s most populous country but also its largest economy, could be particularly severe.

The extension of the travel ban comes at a delicate time for international travel. American Airlines and Delta Air Lines began on Friday to voluntarily curtail flights to the United States from China to combat the coronavirus, and further restrictions are likely.

But it also comes as the 2020 election heats up. Mr. Trump is expected to use his travel ban, as well as his efforts to cut refugee admissions, to rally his political base as his administration contends with a Senate impeachment trial.

Immigrants, citizens and students have already experienced the effect of Mr. Trump’s increased vetting at ports throughout the border.

The administration has contended that the countries on the list have harbored terrorists, maintained outdated passport systems or failed to ensure adequate information sharing. Mr. Trump has also made disparaging comments about African nations in the past, complaining that Nigerians who entered the United States on visas would never “go back to their huts.”

Lai Mohammed, Nigeria’s Minister of Information and Culture, said Nigerian officials had not been advised their country would be included in the ban.

“It would be quite unfortunate if for any reason Nigeria were on the list,” Mr. Mohammed said, noting the two government’s cooperation in combating terrorism. “It would be a double jeopardy: The country has committed a lot of resources to fight terrorism. Any travel ban cannot but be inimical to the growth of the country.”

He added, “Once a travel ban is imposed on a country, the consequences are not always pleasant.”

Democrats, who have long opposed the ban, condemned its expansion.

“President Trump and his administration’s continued disdain for our nation’s national security and our founding ideals of liberty and justice dishonor our proud immigrant heritage and the diversity that strengthens and enriches our communities,” Speaker Nancy Pelosi of California said in a statement.

Days after he came into office, Mr. Trump signed an executive order that closed the country’s borders to people from seven predominately Muslim-majority countries, making partial good on a campaign pledge “for a total and complete shutdown of Muslims entering the United States until our country’s representatives can figure out what the hell is going on.”

The policy took even some of Mr. Trump’s own Department of Homeland Security officials by surprise and prompted widespread confusion at airports across the nation.

More than 79,700 visas have been subject to the ban since December 2017, according to the State Department.

The ban drew several legal challenges but, after some adjustments, was narrowly upheld by the Supreme Court in June 2018. The ban initially restricted travel from Iran, Libya, Syria, Yemen, Somalia and Chad — as well as Venezuela and North Korea. Chad was later removed from the list. The court’s majority argued that the policy was not a Muslim ban, citing the inclusion of North Korea and Venezuela and the administration’s process of granting exemptions.

Chief Justice John G. Roberts Jr. also wrote for the majority that Mr. Trump had the statutory authority to make national security judgments in the realm of immigration. Representative Jerrold Nadler of New York, the chairman of the House Judiciary Committee, said in a statement on Monday that court decision was flawed.

“Sadly, the inclusion of a sham waiver process and a couple of non-Muslim majority countries was enough to convince a slim majority of the Supreme Court that a third version of the ban passed constitutional muster,” Mr. Nadler said. “We are now living with the consequences of that fateful decision.”

Mr. Nadler said in the coming weeks the committee would discuss legislation to repeal the ban.

American citizens, as well as immigrants and potential students, have felt the consequences of that extreme vetting in recent weeks.

After the death of Iran’s powerful commander, Maj. Gen. Qassim Suleimani, who was killed in an attack ordered by President Trump, Customs and Border Protection officers at American borders stepped up vetting of travelers of Iranian descent, including American citizens and legal permanent residents, who have a constitutional right to enter the United States. Two days after the attack, hundreds of Iranians and Iranian-Americans travelers were held for hours at a port of entry in Blaine, Washington, where many said they were subjected to questioning about their religious and political beliefs.

Customs and Border Protection officials denied afterward that a national directive had been issued to detain or deny entry to travelers based solely on their connections to Iran. Reporters at the Canadian Broadcasting Corporation later reported that they had obtained documents stating that a directive had, in fact, been issued.

A Homeland Security Department official confirmed the authenticity of the document, adding that the directive was limited to the field office in Blaine, Washington. It stated that Iranians as well as “any other nationality that has traveled to Iran or Lebanon” should be subjected to increased vetting.

A spokesman for Customs and Border Protection declined to comment on the document but said the situation was under investigation, and that, “at no time did D.H.S./C.B.P. issue a directive to deny entry to any individual.” The spokesman did not say whether Iranians were being subjected to increased vetting as a matter of policy.

Representative Sheila Jackson Lee, Democrat of Texas, said the House Homeland Security Committee was not consulted on the ban, and she questioned the administration’s claims that the countries facing restrictions presented security concerns.

“There’s no doubt that there’s terrorist elements roaming throughout various countries, but there’s bad actors in Russia, bad actors in China. None of those places have been put on any ban,” Ms. Jackson Lee said.

Doug Rand, who worked on immigration policy in the Obama White House and helped found Boundless Immigration, a technology company that helps immigrants obtain green cards, said the additions to the ban would not just affect foreigners but also American citizens.

“It has become a de facto family separation policy besides the obvious one at the border,” Mr. Rand said. “This will just magnify the pain to extend it to other countries.”