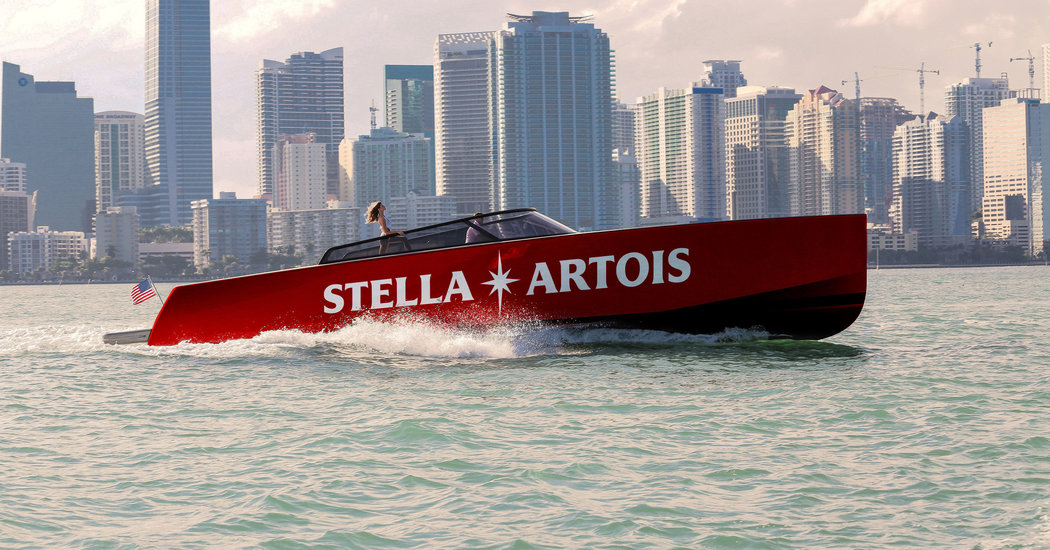 Stella Artois has big plans to promote itself during the Super Bowl.

None of them involve a commercial.

Instead of spending up to $5.6 million on a 30-second spot, the beer brand is sponsoring a three-day event in Miami, the host city of the game between the Kansas City Chiefs and the San Francisco 49ers.

The decision to skip what is typically the most-watched broadcast of the year seems counterintuitive. During last year’s N.F.L. championship, Stella Artois aired a commercial starring Sarah Jessica Parker and Jeff Bridges that was credited with pulling the brand out of a slump.

The move seems even more unorthodox when you consider that many of Anheuser-Busch’s other major brands will advertise during the game on Sunday. But Peter Van Overstraeten, a vice president at the company, said it was smart to sit this one out.

“It’s a matter of balancing and making sure our efforts are not lost in the big sea of messaging that’s going on,” he said.

The gathering, called Port de Stella, started Thursday. It features a performance by the musical duo Sofi Tukker, appearances from celebrities like the actress Priyanka Chopra Jonas and pop-up restaurants catered by chefs like Rosio Sanchez. Visitors can skip causeway traffic by taking yachts emblazoned with the Stella Artois logo from South Beach to the event’s downtown Miami location.

In addition to its status as secular national holiday, Super Bowl Sunday is an advertising bonanza, a day when commercials are not only tolerated, but sought out. TiVo, the digital video recorder that allows viewers to bypass ads, will revive an option that skips over the football and goes straight to the promotional spots.

But limited space and rising prices, as well as a growing preference for other forms of advertising, mean that many companies end up on the sidelines.

Burger King and Skechers, which advertised during the game last year, will not return for Super Bowl LIV. Wix, a website-building platform that has appeared during the Super Bowl since 2015, is also going to skip it — a risky move, perhaps, since its main rival, Squarespace, will air a commercial showing Winona Ryder in her birthplace, Winona, Minn.

Fox, which will broadcast the game this year, said it quickly sold out all 77 of its national advertising slots — and added more to accommodate demand. Many companies, including Porsche and New York Life Insurance, are returning to the game after decades away. Others, like Facebook and Saucony, are making their Super Bowl debuts.

But some businesses are priced out. Even Hollywood studios have scaled back.

Others have decided the exposure may not be worth it. In addition to the costs of producing a game-worthy ad and booking a slot, there is the effort and expense that goes along with Super Bowl commercials, which have become the centerpieces of elaborate strategies rolled out across multiple platforms before, during and after the contest. There are advance teasers on social media, publicity stunts, behind-the-scenes videos, extended cuts — a multifaceted approach known in the industry as a 360-degree operation.

Some brands have come up with ways to get attention at this time of year without the cost and headache of suiting up for the game. Acreage Holdings made news last year when CBS turned down its pitch for a Super Bowl commercial, a rejection that still shows up in the marijuana company’s marketing materials.

Television advertising remains an enormous business, worth $42 billion in the United States last year, according to the media intelligence firm Magna. But companies are spending less on TV as they shift their ad budgets to the digital realm. And with cord-cutting on the rise, the number of viewers watching the Super Bowl television broadcast has gone down in recent years. In 2017, 111.3 million viewers watched the game on Fox, a number that dropped to 103.4 million in 2018, when it was broadcast by NBC. Last year the number of people who watched the Super Bowl on CBS fell to 98.2 million, with 2.6 streaming it.

Companies that stay away take another factor into consideration: They are able to glean a lot more information about people clicking on online ads than the people who see their commercials on TV.

The actor and entrepreneur Ryan Reynolds, who owns a wireless service called Mint Mobile, made much of his decision to stay away from this year’s Super Bowl in a full-page ad that ran in The New York Times. After noting that companies were spending more than $5 million to book time on the broadcast, he emphasized that he would not be doing the same, saying in the ad: “that’s a HARD no.”