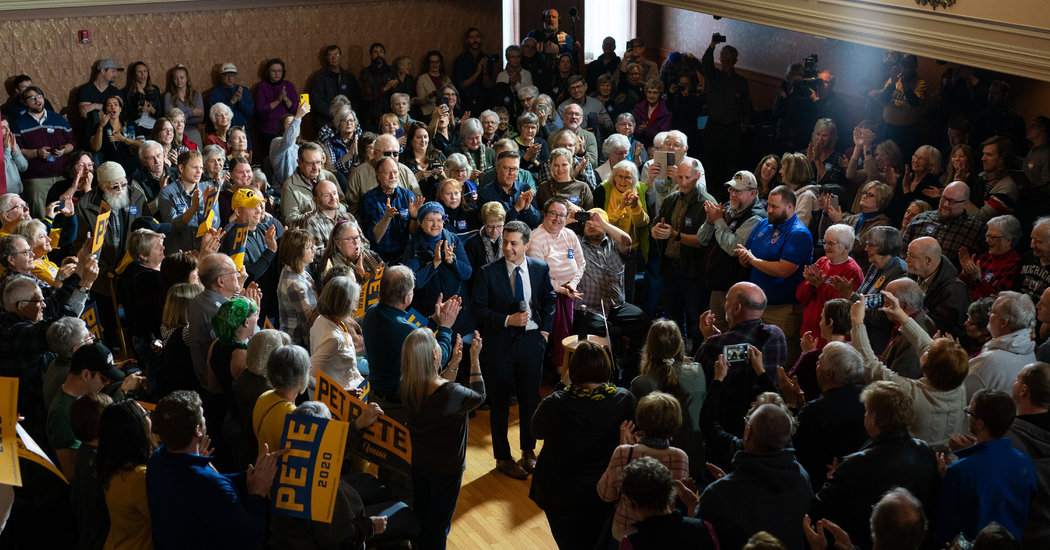 OTTUMWA, Iowa — No presidential campaign is spared its awkward moments: overlong hugs from supporters, groaners about the Iowa weather, white lies about the caliber of the local cuisine.

But Pete Buttigieg — who came to Iowa a year ago suggesting it might help that he was “not a household name” and is now a top contender in state polls — projects something different. He is perhaps the only candidate who can look as if he is weaponizing awkwardness as a conscious choice.

He smiles with effort in photographs, like something borrowed from middle school picture day, and informed an Iowa crowd this week that he has “not had the pleasure” of attending an N.B.A. game. He recites the New Hampshire creed of “live free or die” with a hokey addendum: “It doesn’t have to come down to that.” He recently gave a thumbs-up to a baby.

And when the time comes for prewritten audience questions, pulled from a fishbowl and read aloud, Mr. Buttigieg, the 38-year-old former mayor of South Bend, Ind., surveys the room for their authors and vamps — a mélange of scanning and squinting built into an otherwise tightly choreographed program:

“The lights are rather bright. Oh, there you are. I can see your hand. Alright.”

“Anybody want to claim that one? Hey! Alright.”

Most policy questions come and go without incident. The softballs can get interesting.

“So, you know, I have a cactus,” he said in Claremont, N.H., digressing after a child’s query about his pets. “The cactus is supposed to be pretty hard to kill, right? You’re not supposed to have to take care of it too much. But I’m not great about watering plants.”

The room was quiet. The candidate grinned a bit, then reconsidered. O.K. Alright.

As Mr. Buttigieg has outraised and outlasted many far more established Democrats this election season, opponents have often strained to make sense of a campaign that can bear some resemblance to the under-loved cactus of South Bend: dry, unusual, exceedingly difficult to kill.

And with Mr. Buttigieg now seeking to translate his remarkable rise into electoral success — appealing beyond a support base that can look disproportionately old and white — his fate could hinge on his ability to viscerally connect with audiences in the early-voting states that most reward such skills, which do not necessarily come naturally to him.

As a retail politician, Mr. Buttigieg is running as a prospective phenomenon-candidate who shares little with the Democratic phenomenon-candidates who came before. Bill Clinton felt your pain, or at least made you think he did. Barack Obama could move the masses with a pregnant pause … weighing all that is possible … in the United States of America.

What, then, of Mr. Buttigieg — the viral sensation whose charisma can feel like a disarming dearth of traditional charisma?

“He’s not the most charming person one on one,” said Judy Downs, the executive director of the Polk County Democrats in Iowa. “Which isn’t a criticism of him personally. He’s just not as practiced.”

“You can’t fake a personality, and you can’t fake those kind of skills,” said Mark Buell, a major Democratic fund-raiser and Buttigieg supporter based in San Francisco. “I wouldn’t say that Pete is charismatic, though he is in a way: I’ve become so fond of him that I just kind of enjoy listening to him.”

And that, in dozens of interviews with Buttigieg admirers across the country, appears to be the gist.

Yet in his improbable journey to the upper reaches of the Democratic field in Iowa and New Hampshire, Mr. Buttigieg appears to have carved out his own category: He is the candidate of the ear, elevated by a baritone delivery belying his age, saying the things that sound about right in a moment when the least Trumpian notes sound especially good to Democrats.

“This is a time to take one last look at the Trump Show,” he told voters inside an Ottumwa gymnasium on Tuesday, “and change the channel to something better.”

At least as often, though, they describe a feeling of being soothed, of imagining — as Mr. Buttigieg often instructs at the beginning of his stump speech — the day after President Trump has left office. He has been known to invoke the Lincolnian habit of writing blistering letters and never sending them. He predicts that voters’ tumbling blood pressure in a Buttigieg administration will amount to a “public health bonus.”

“Point by point, our values match,” said Betsy Jones, 67, after the event in Ottumwa. “You never hear Pete come down negatively on another candidate.”

At times, Mr. Buttigieg has proved capable of summoning personal anecdotes to draw in an audience. This week, after a voter described being a caregiver for her husband with dementia, Mr. Buttigieg raised the example of his own father, whose death one year ago he has rarely discussed at his events.

He has spoken more often of the honor of hearing from younger gay people about the inspiration his campaign has provided. But some allies also suggest that Mr. Buttigieg’s sexual orientation — and relatively recent public identification as gay — present implicit complications for a candidate who seems to recognize his reputation as less than emotive.

“I would argue that some people are given more room to be emotive than others,” he said in an interview with the New York Times editorial board. He declined to specify whom he had in mind but added that he was “mindful as the new guy that maybe waving my arms is not the best way to convey what I care about.”

Over several events across Iowa and New Hampshire in January, Mr. Buttigieg’s supporters settled in for the kind of center-left easy-listening fare that has become his hallmark. He lamented a national “crisis of belonging.” He wore out the phrase “American experiment.” He presented ideological moderation as necessary and optimism as politically bold. “I know hope is a little bit unfashionable these days,” he said at one point, declaring himself unapologetically pro-hope.

“You said everything I wanted to hear!” a woman shouted at him in Nashua, N.H., as he prepared to leave. She almost certainly meant this as a compliment. Others have logged similar reviews and reached a different conclusion.

“He says the right things. He sounds great,” said Maggie Murphy, a college student, after seeing him in Manchester, N.H. “I don’t think he’s a very genuine candidate.” She raised concerns about his record on race relations in South Bend.

The nature of Mr. Buttigieg’s appeal can be particularly striking when his fellow front-runners are taken into account. Senators Bernie Sanders and Elizabeth Warren have spent years fine-tuning a rousing progressive pitch. Former Vice President Joseph R. Biden Jr., despite his capacity for blundering, has retained an instinct for one-on-one bond-building.

On matters of substance, those critical of Mr. Buttigieg can find him smooth, bordering on slick. Off-camera is another matter.

Ms. Downs, the party’s executive director in Polk County, Iowa, recalled a small reception before a candidate event last year, where Mr. Buttigieg’s absence of presence — clipped answers, keeping to himself — left an impression. “Cory Booker and Kamala Harris just lit up the room,” she said, naming two senators who have since left the race. “They were holding people’s hands and hugging them. And then Pete comes in and honestly I think it was kind of intimidating for him. Like, ‘This person is not very comfortable right now.’”

Ms. Downs suggested that Mr. Buttigieg’s inability to “whip support up in a frenzy” was perhaps a counterintuitive advantage, supplying a sharp contrast to Mr. Trump.

David Axelrod, Mr. Obama’s former chief strategist, said that while Mr. Buttigieg had grown as a candidate, he still registered as “a little reserved,” which Mr. Axelrod called a liability.

“That’s a big test for him,” said Mr. Axelrod, who is friendly with Mr. Buttigieg but not involved in the campaign. “Humanity is not an intellectual concept.”

At times, Mr. Buttigieg has deployed his wry detachment to useful effect. Appearing on “CBS This Morning” in December alongside the singer Lizzo, who was booked for a separate interview, Mr. Buttigieg was asked to describe himself in three words. “Standing near Lizzo,” he said.

Other impromptu run-ins have been less successful. At the Iowa State Fair last summer, Mr. Buttigieg happened upon a woman who said she had shaken Robert F. Kennedy’s hand in 1968.

But as he prepares for the final sprint of an early-state campaign that was never supposed to matter for this long, Mr. Buttigieg has plainly endeared himself to a particular strain of voter: Democrats who want the volume turned down — if the party would only let the former mayor commandeer the remote — low enough for his voice to carry.

After an event in Wolfeboro, N.H., Mr. Buttigieg fell into conversation with Deanna O’Shaughnessy, 68, from Alton, N.H., who quavered from Parkinson’s disease as she approached the stage. She had brought two C.S. Lewis books for Mr. Buttigieg as gifts. “I’ll knock down a grocery clerk if I have to, to tell her about Pete,” Ms. O’Shaughnessy said.

Mr. Buttigieg thanked her and handed the books to an aide. “I can’t wait for Pete and Chasten to read those books,” Ms. O’Shaughnessy said afterward.

She imagined Mr. Buttigieg and his husband reading to each other each night, taking turns on the campaign bus after an endless day. She could just hear it, she said, the two of them calming each other down. She liked how that sounded.