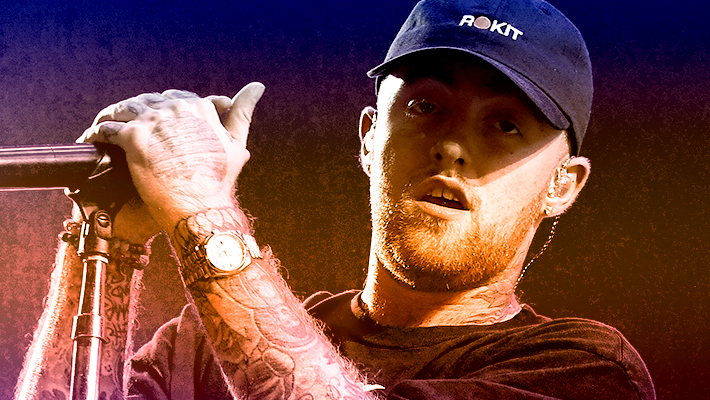 2020 started off in fine fashion. There were album drops from rap legends like Eminem as well as DJ Stretch Armstrong & Bobbito. There was also Mac Miller’s posthumous Circles, as well as an addendum to Dreamville’s Revenge Of The Dreamers III bonanza. Which albums from this month will be recognized at next year’s Grammys? Time will tell.

Posthumous albums are a tricky thing. It’s a morbid mandate for an artist’s vault to be emptied at the time of their untimely death. But the quality of a posthumous album doesn’t depend solely on the breadth of left-behind recordings, as evidenced by Tupac’s vast reserve of verses being wasted on middling posthumous projects. The lasting value often depends on who curated the project in an artist’s absence.

If it’s simply a label, music consumers are usually primed for a scrounged together mashup album (or two) just for the sake of maximum profit. But in the case of Mac Miller’s Circles, magic can happen when loved ones oversee the project. Circles was set to be the second project in a trilogy of albums following 2018’s Swimming.

But after Mac’s death in September of 2018, musician Jon Brion finished the 12-track album based on conversations with his friend. He did a wonderful job, finalizing a lush collection of contemplative songs like “Surf,” “Hand Me Downs,” and “Complicated.” Mac’s wayward laments like “Good News’” “I wish that I could just get out my goddamn way / what is there to say?” are as distressing as they are relatable to the diehard fans still mourning his loss.

Last year’s Revenge Of The Dreamers III project was an exciting kickoff to 2019. J. Cole and Dreamville invited a who’s who down to Atlanta to collaborate on the label’s Grammy-nominated collaboration album. And they started off 2020 with a harkening to that moment via a Deluxe version of the project. They released a whopping 12 tracks that weren’t on the original release featuring artists like Smino, Buddy, Vince Staples, and more. Dreamville artists still anchor the project, with Cozz, Bas, and JID showing up the most. Highlights of the impeccably produced compilation include Ari Lennox’s “BUSS IT,” “Up Up and Away,” and the smooth, aspirational “Still Dreamin’” featuring JID, Lute and 6LACK.

What can be said about Mick Jenkins’ lyrical ability that hasn’t already been expressed? He states his own case pretty well on The Circus, his fourth career EP. He starts out the project with the Hit-Boy-produced “Same Ol,” where he notes “I step in rooms where n****s don’t know who I am / leave out felt, that’s on me,” then spends the rest of the project spitting with an urgency, insight, and skill that demonstrates why his core of devotees are steadily growing.

Most of the project is a solo effort except for “The Light” with Earthgang, where the track’s glittering keys seemingly float down on listeners while Mick proclaims, “we wired the intricacies of our logic, no hands in my pocket.” As long as he keeps spitting like this, he can stand alone forever.

G Herbo’s Sessions released in the last week of December, but we’re going to count it in this column as it may have been lost in decade retrospectives and copious holiday partying. Herbo may be known more among casual fans for his relationship drama and legal woes, but Sessions is a reminder of why he’s also known as one of Chicago’s best rappers. The nine-track project showcases Herbo lyrically locked in, not just delivering his gritty recollections of the Chicago streets on “Can’t Sleep” and “My Bros A Legend,” but exploring the traumatic toll of that lifestyle like very few artists of his generation.

Kota The Friend is set to further ascend at the turn of the decade. He’s already been announced for Governor’s Ball, and decided to offer both the unaccustomed and his burgeoning fanbase an early glimpse of why. Lyrics to Go Vol. 1 is a 10-song compilation of Kota in his bag, delivering typically introspective verses over soulful self-produced tracks. Whereas people may still be off-put by Kanye West’s “Closed On Sunday,” Kota’s “Open On Sunday” delivers. His earnest reflection into a faltering relationship shows him at his best and most relatable, exploring everyday qualms with his own poetic twist.

When rappers proclaim themselves the best rapper in the world, they often actually mean America. But increased visibility for artists throughout the continents of Europe and Africa has vastly expanded the scope of competition. J Hus is chief among them. The 23-year-old artist has stoked intrigue with his so-called “afroswing” sound, which even had Drake bringing him on.

But on Big Conspiracy, he confirms that the hype is warranted and he can stand on his own. The smooth project exemplifies the dynamism of the UK music scene, as Hus and his producers fuse elements of rap, R&B, house, and other genres into a cohesive soundscape that’s going to be hard to top on tracks like “Must Be” and ”Play Play” with Burna Boy.

It’s a testament to Tupac’s legacy that a refreshing amount of the artists who co-opt his name for project titles and nicknames actually do him justice. Artists like 20-year-old Quando Rondo identify with both the plight of poverty and the fury engendered by such an environment, two principal themes in Tupac’s music. Rondo could have critically erred with both the Pac reference and a hefty 18-song tracklist, but he succeeds on his debut album QPac. His vulnerability, existential excavation and ear for melody on tracks like “Nothing Else Matters” and “Real Love” lump him with artists like Roddy Ricch and NBA Youngboy, who both boast their own cult fanbase. Rondo will be on his way to gaining one of his own with more projects like the 18-track catharsis.

Earl Sweatshirt has said that Brooklyn rapper Akai Solo “leaves people with a burning desire to do better in his wake.” That could be interpreted as a meta observation of his considerable lyrical ability and prolific work ethic, or the galvanizing potential of his edifying, esoteric approach. It’s likely a bit of both. The self-proclaimed “MC from the void” most recently displayed his gifts with the help of Richmond rapper/producer Bstfrnd on Like Hajime. The two artists coalesce their skills to create a sonic universe where SOLO’s relentless delivery and intellect shards through Bstfrnd’s versatile, experimental canvas.

Madlib & Oh No — The Professionals

Having Madlib or Oh No produce your project is a blessing — ask Freddie Gibbs or Blu, respectively. Having the brothers back together as The Professionals is a straight-up cheat code. The two artists linked up and released a 13-track collection of tracks that veer from “The Pros’” caustic, “Give N Take’s” charm, and “Timeless Treasure’s” ceaseless energy — keeping the drums crispy throughout. Oh No handled the raps for most of the project, save collaborations with Adub on “Payday” and Elzhi and Chino XL, who shone on the aptly-titled “Superhumans.”

Payroll Giovanni and Cardo cooked up one of 2018’s most underappreciated rap albums with Big Bossin’ Vol. 2. This time around, Larry June added his dense lyricism and Bay-bred game to their modern G-Funk rendition on Game Related. Cardo is from Texas, Payroll is from Detroit, and Larry June is from the Bay — but songs like “See U Hatin” and “Foreign Status” exemplify that the three know their way around some smooth, smoky synths. Both Payroll and June have clearly been around the block. Their shared insights on money, power, and respect over Cardo’s strong production make them a strong tandem.