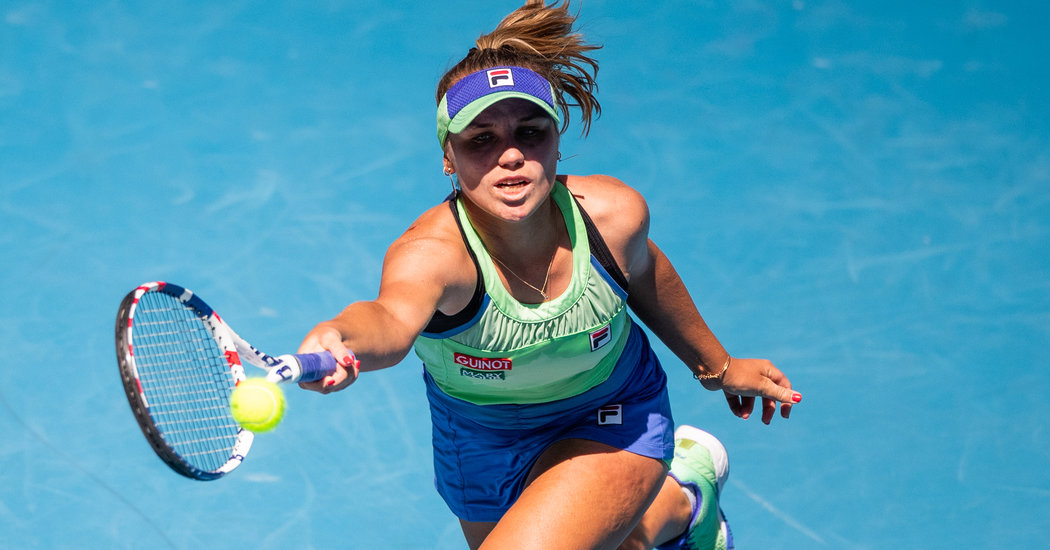 MELBOURNE, Australia — At age 21, Sofia Kenin has not arrived at her numerical goal in tennis.

“I want to be No. 1,” she said recently in Melbourne, as she has been saying since she was 6 years old.

But for now Kenin, a fiery and driven Floridian, is one match away from her first Grand Slam singles title.

It won’t come easy. Garbiñe Muguruza, 26, her powerful opponent in the Australian Open final on Saturday, is a two-time major champion who is back in a deep groove.

But Kenin, the daughter of Russian immigrants who arrived in the United States in 1987 with only a few hundred dollars, won’t mind if it does not come easy. She likes the battle, truly, which is rarer than you might imagine, even in a sport as Darwinian as professional tennis.

“People on tour know now that I won’t give up,” the 15th-ranked Kenin said in an interview this week. “If you want to beat me, you have to really beat me. You have to finish it. No matter what the score is, I’m still going to be there fighting and doing my best to turn the match around, and I’ve done it a few times.”

The latest example: her semifinal upset on Thursday of Ashleigh Barty, the world No. 1. Kenin saved two set points in both sets and won, 7-6 (6), 7-5.

“She just doesn’t back off,” said Tracy Austin, a former world No. 1. “She has incredible focus, and she’s got incredible hunger. It’s very evident. Some players, deep down, you are not so sure that they love that five-all, deuce moment. I get the feeling Kenin just marches over and says, ‘O.K., bring it.’”

Like Austin, a teen prodigy who won the United States Open in 1979 and 1981, Kenin is of average size but strong mind.

Win or lose on Saturday, Kenin, who is coached by her father, Alex, will move into the top 10 for the first time, and her rise into the elite reflects significant trends in women’s tennis.

Despite predictions in the 2000s that the game was soon to be dominated by towering power players with big serves and superior reach, things have not worked out that way.

So is Kenin, although she did not look much taller than Barty when they lined up for pre-match photographs at the net on Thursday.

“It’s a great lesson for anybody in that it’s not always about how big, strong and super fast you are, it’s what’s under the hood,” said Rick Macci, one of Kenin’s childhood coaches, who calls her “the mosquito.”

“She’s just there the whole time, bothering you,” he continued. “She’s had this innate mental strength since she was a little kid. It was already baked in there.”

Macci, who is based in Boca Raton, Fla., worked with several future stars in their youth, including the future No. 1s Maria Sharapova and Venus and Serena Williams.

One of the keys for shorter players is to contact the ball early to avoid having to do so up and out of their ideal hitting zone. It also protects them from getting pulled wide, where reach is an issue. Kenin may not be as fast as Halep or as flexible as Andreescu, but her early-contact skills and control are extraordinary.

“Her timing of the ball is better than anybody I ever taught,” Macci said of Kenin. “You’ll notice she’s not out of balance that much, and she can take the ball right off the bounce like a wizard. Everyone can hit deep, but the angles she gets, even while taking the ball early, are so acute that she gets you off the court, and then she goes for the jugular. She has a drop shot from another planet. She’s the closest thing I think this sport has seen to Martina Hingis. It doesn’t surprise me whatsoever to see her in a Grand Slam final.”

The success of the Williams sisters and Sharapova has had a major role in shaping the next generation of American women’s players.

Sharapova, a Russian who moved to Florida as a young girl with her father, Yuri, to pursue her family’s long-shot tennis dream, was Kenin’s idol. Amanda Anisimova, an 18-year-old American who reached the French Open semifinals last year and is ranked 24th, is also the daughter of Russian immigrants.

“I think for families of Russian background, I think Maria has been such a role model,” said Martin Blackman, the general manager for player development at the United States Tennis Association.

The Williams sisters have inspired the 15-year-old Coco Gauff, who is part of a new generation of rising African-American players, and many others.

“The Serena and Venus effect has been huge, but not just for African-American girls,” Blackman said. “They have attracted so many girls of all backgrounds and ethnicities into the sport, which has been so good for the game.”

Kenin made her first big Grand Slam move at the French Open last year, when she upset Serena Williams in the third round, holding her ground despite meeting resistance from the crowd when she questioned line calls.

Kenin has anything but a poker face on court — gesticulating, shouting encouragement to herself and occasionally flinging her racket to the ground. But she also has a remarkable ability to refocus, and once a rally is lost, she will typically turn on her heel and briskly march to wherever she needs to be to play the next point.

“She self-coaches,” Austin said. “She’s got that fist pump and talking to herself, and she’s walking fast and there’s a lot of energy. She resets really well, and sometimes it’s almost a Jimmy Connors effect, where she uses the negativity for fuel and to her advantage.”

Kenin’s emergence has been overshadowed in the last two seasons by Serena Williams’s comeback from childbirth and by Gauff’s breakout story. But this is Kenin’s moment (she beat Gauff in the fourth round), and for all her pluck and tactical acumen, it remains unclear how she will handle her first major final.

Kenin beat Muguruza, 6-0, 2-6, 6-2, in the first round of the China Open in September, but Muguruza was in a funk then, before rejoining forces with Conchita Martínez, the 1994 Wimbledon champion who helped coach Muguruza to her own Wimbledon title, in 2017.

“I think if they both play at their best, Muguruza will win,” Austin said. “I was very impressed with Muguruza’s performance in the semifinals against Halep.”

But Kenin has not sounded like a young player simply delighted to have made it this far. Even if she handles the pressure, hits her spots with her first serves and prevails on Saturday, her objective will not be achieved.

“Before coming to Australia, she was at the academy getting a massage in the off-season,” Macci said. “And she told me her goal is to be No. 1 in the world, just like, matter of fact.”