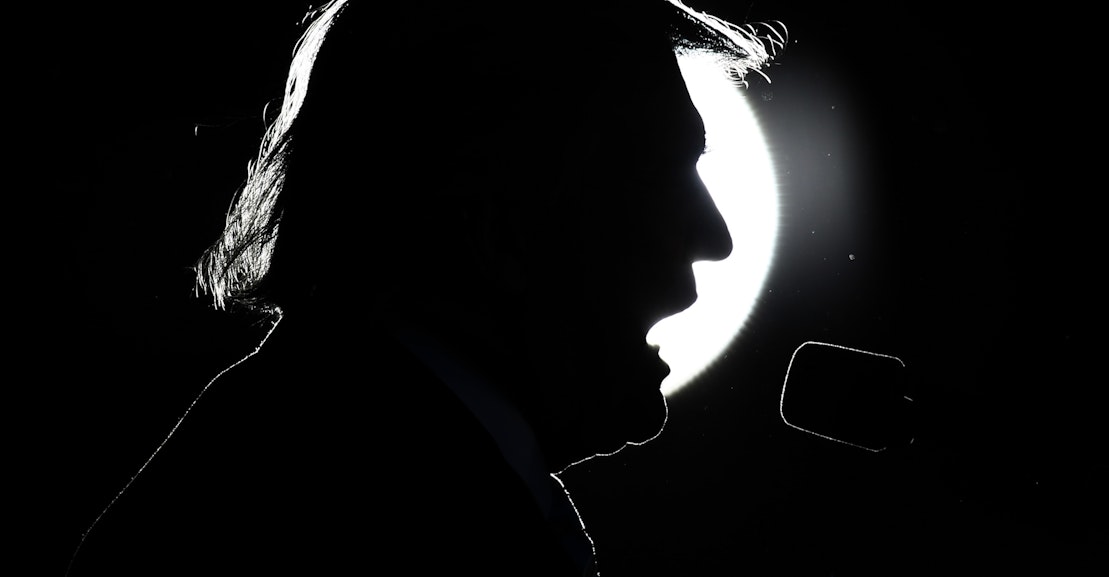 All eyes will be on Iowa this Monday as voters cluster in school gymnasiums and churches around the state to kick off the months-long process of selecting a Democratic nominee for president. According to the Pew Research Center, Democrats have arrived at the beginning of the primary season wary about their preferences but generally “upbeat” about the field of candidates. Less contented, as the first electoral contest grows nigh, are that faction known as Never Trump Republicans. In order to participate in the caucus, Iowans must register as Democrats. It’s not clear that the Never Trumper contingent has successfully encouraged like-minded Iowans to do so, despite their stated mission of making sure this president only gets one term.

What they have done instead, is offer a lot of potshots and unsolicited opinions from their lofty media perches. Now, as polling less than a week from the Iowa caucus indicates that the durable candidacy of Vermont Senator Bernie Sanders is beginning to crest, their anxiety is intensifying alongside a growing fear that swing voters or disaffected former Trump voters will see Sanders as a bridge too far. While this will inevitably be true for some of these voters, what the Never Trumpers really mean is that Sanders is a bridge too far for themselves. They have arrived at this moment, aghast that Democratic voters might not see the post-Trump restoration of the Republican Party as their highest priority.

Faced with the prospect that Democratic caucus-goers may not exclusively have their interests as their guidestar, Never Trump Republicans are warning that they may sit out their only remaining opportunity to vote the president out of office. A recent piece in The Washington Examiner about Never Trump dissatisfaction in the face of Sanders’ ascension makes the terms of this emotional blackmail clear. “Philosophically conservative and not wanting to be perceived as otherwise, they view Sanders’s self-professed “democratic socialism” as equally problematic and might skip 2020 altogether if he leads the Democratic ticket,” writes The Examiner’s David Drucker.

Others, Drucker reports, will, in the event of a Sanders candidacy, plan to “sit on their hands or vote for a hopeless third-party candidate in protest.” Not voting or voting in protest is something you can afford to do when the outcomes of elections have no tangible effect on your everyday life; when your place within the American experience is purely theoretical.

The Never Trump Republican occupies just such a space in the American political discourse. They believe their membership to the party that has lately embraced a creeping authoritarian worldview lends them an unimpeachable credibility because, in their humble opinion, they combine two uniquely ennobling qualities: a superior understanding of the psyche of Republican voters, and the steadfast courage to speak out against their party’s current standard bearer. These traits, they believe, allow them to become impartial arbiters of politics across the spectrum. No, they don’t have access to any special polling data or secret science. Their special weapon is their own self-possessed, arrogant beliefs—which, in their own way, are quite Trumpian.

And like Trump, they’ve done well for themselves. In a sign of the Republican party’s precipitous plunge, many members of the Never Trump squad have been rewarded with high-profile columnist and cable news gigs, as well as heaps of praise for doing nothing but the bare minimum—expressing basic empathy for the people hurt by the president’s sadistic policies. Back in July, Washington Post columnist and MSNBC contributor Jennifer Rubin tweeted “If you want to know why women are streaming out of the GOP: Allowing [Secretary] Acosta to remain. Kids in filthy cages. This is infuriating to them.” It received thousands of retweets.

It’s hard to square Rubin’s claim that the imprisonment of migrant children at our southern border will be a moral force which pushes Americans from red to blue while she persists in comparing the leading Democratic candidate—Sanders—to the man she’s built her reputation on hating the most. “Democrats are not going to win with their own Donald Trump, especially one who has burned bridges and stirred resentment in his own party,” she writes. In this telling, the intra-party factionalism bred by Sanders is just as bad as internment camps filled with frightened children.

In their version of America, the 45th president is merely an ugly blemish on a pristine nation that was justified to go to war in Iraq, to deny health care to millions, and to allow plutocratic interests to thrive while the huddled masses suffer.

Besides, it’s not as if Never Trumpers like Rubin are authentically concerned that rancor among Democrats may make it harder for them to govern the country according to their values. In their version of America, the 45th president is merely an ugly blemish on a pristine nation that was justified to go to war in Iraq, to deny health care to millions, and to allow plutocratic interests to thrive while the huddled masses suffer. The only narrow trait they share in common with Democrats is that they think Donald Trump is horrendous. But the only civic role Democrats are allowed to play, in this vision, is to facilitate the removal of an aberrant Republican president. Naturally, Democrats have impossibly different ideas about the roots of Trump’s rise and how that problem should be solved. And Sanders—along with his closest ideological match in the current field, Massachusetts Senator Elizabeth Warren—broadly threaten the worldview around which Never Trump Republicans had made their living before Trump arrived to put a vulgar face upon it.

Membership in the Republican Party hasn’t precluded this group of mostly older, whiter, Never Trump pontificators from engaging in counterproductive fear-mongering of the Fox News variety in an effort to coerce Democratic voters select a candidate who they deem acceptable. Along the way, they’ve invented an entirely new genre of polemic, in which Democrats are scolded for not ensuring that their presidential nominee will appeal to Republicans. While the Never Trumpers may sleep well at night under a blanket of sanctimony, their efforts to poison the well for progressive candidates in the days leading up to the nation’s first caucuses and primaries run counterproductive to honoring the democratic process they claim to so deeply revere.

This is seen most searingly in the way that Never Trump Republicans have lately turned toward laying out the ways in which Trump is certain to defeat Sanders in the general election. Last week, strategist, author and Never Trump Republican Rick Wilson tweeted defensively on behalf of his crew, “We’re not the problem. The problem is that Bernie will get crushed in 44 states. Enjoy a decade of Trumps.” And in The Bulwark, a publication founded for and by this very audience, Richard North Patterson wrote this week, “Trump has left us weary and fretful, a nation of people ceaselessly on edge. Sanders’ ‘political revolution’—his heated language, sweeping proposals, and pledges of relentless confrontation in pursuit of his societal utopia, however heartfelt, are wrong for such a febrile moment.” His story was shared breathlessly by his cohort.

They are, in essence, writing Trump’s campaign strategy on the president’s behalf—an in-kind donation that will benefit the president no matter who he draws as an opponent.

Some Never Trump prognosticators have taken it one step further, by writing Trump’s attack ads for him in the event of a hypothetical Sanders general election candidacy. “The Trump campaign will not steer clear. It will hit him with everything it’s got,” George W. Bush alum David Frum wrote for The Atlantic. “It will depict him as a Communist in the grip of twisted sexual fantasies, a useless career politician who oversaw a culture of sexual harassment in his 2016 campaign.” If Frum and his ilk don’t start minding how they speak about the Democratic frontrunners, their attacks on Bernie will become a self-fulfilling prophecy. They are, in essence, writing Trump’s campaign strategy on the president’s behalf—an in-kind donation that will benefit the president no matter who he draws as an opponent.

While the idea of a Joe Biden, Pete Buttigieg, or Amy Klobuchar presidency may seem more palatable to the anti-progress predilections of the Never Trumpers, this Democratic primary isn’t about them. There are voters who are actually committed to the ideals of the Democratic party and who dream of a better world after Trump that’s not just a facsimile of the world before.

When Democrats go to the caucuses and polls in the coming weeks, the concerns of George Conway, David Frum, Steve Schmidt, the membership of the Lincoln Project—literally any Never Trump Republican who should have spent the past four years trying to repair their own party instead of demanding accommodations from their ideological opponents—won’t be weighing on them. Yes, these voters are concerned about which candidate can beat Donald Trump, but this tiny crew of high-profile conservatives-in-exile who can’t even convince a sizable minority of members of their own party to turn on an impeached president will be far from their minds. This is as it should be: Voters should choose a candidate who excites them, who promises a brighter future—not one engineered to placate a lost gang of middling naysayers.