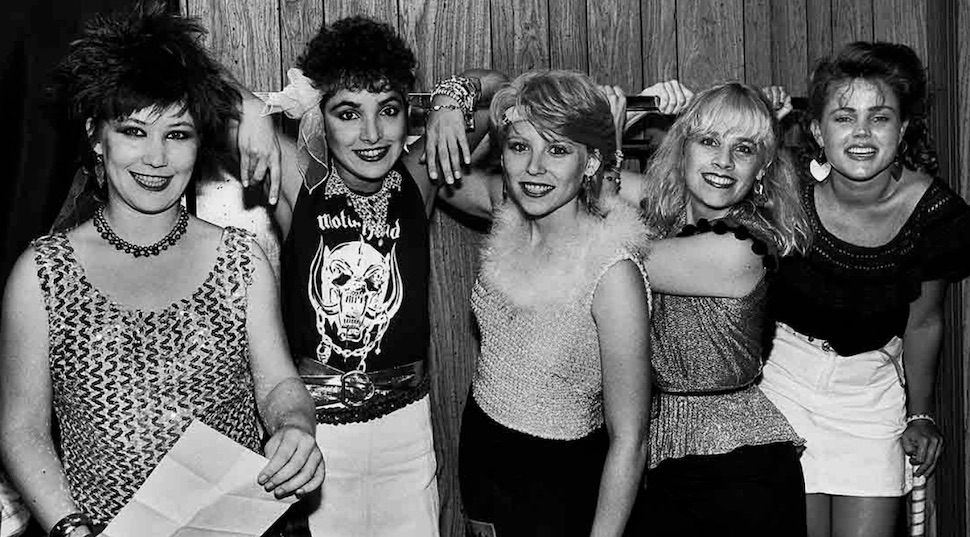 Okay, so, yes, I love The Go-Go’s. I’m at person in the bar that, if there’s a working Touch Tunes player, will put on three or for Go-Go’s songs in a row. When I was a little kid, I kind of had to discover pop music on my own. My dad listened to country music (at this point in my life I became very familiar with the Oak Ridge Boys on the family car radio), and as an only child I never had the Almost Famous moment where an older sibling game me some albums and told me one day I’d be cool. (Though, in my fantasy version of this scenario, Zooey Deschanel would leave a copy of Beauty and the Beat under my bed.) So, no, it was up to me to discover on my own. And at the time we lived in a small town near Lake of the Ozarks (yes, just like the Jason Bateman series) and the local cable company didn’t even have MTV. So, to immerse myself, when my parents were out to dinner, or whatever it was they were doing, I’d sneak downstairs and tune in to a music video show called Night Tracks, which aired on TBS (then called WTBS) for hours and hours every Friday and Saturday night.

And, around this time, The Go-Go’s’ video for “Head Over Heals” was in heavy rotation and I was transfixed. This wasn’t the Oak Ridge Boys. This was pure joy. This would be one of my main entryways into pop music and I’d become a fan of The Go-Go’s music for life. But even at the time, it was weird that “Head Over Heals” would be one of their last hit singles on their last album before breaking up. Only now I realize, after watching Alison Ellwood’s new documentary, The Go Go’s, (which premiered at the Sundance Film Festival), that this song of pure joy, “Head Over Heals,” was being preformed by five musicians who were all miserable and were in a band that was about to break up. (After rewatching this video today, yes, now knowing this information, it kind of comes through. The smiles now seem a bit too forced.)

It’s hard to peg The Go-Go’s — whose members at their most famous point, and currently, consist of Belinda Carlisle, Jane Wiedlin, Charlotte Caffey, Gina Schock, and Kathy Valentine — as a fraught band, but they were fraught. Even in the era the documentary doesn’t really cover — pretty much from the band breaking up until their current reunion — the band is plagued by lawsuits from bandmembers suing each other for unfair compensation. There was a lot of drama being a Go-Go.

But it’s still remarkable that lineup plays together today (they are embarking on a tour this summer). After watching this documentary, I still don’t totally believe everyone likes each other, but at least I can appreciate they can set their differences aside to still play together and make people happy (and, yes, make money). Think how many bands can’t do that.

The legacy of The Go-Go’s is they were the first all-girl band who played their own instruments, wrote their own songs, and were formed organically (as opposed to some record executive piecing them together) to go on to have a number one album on the Billboard charts. The legacy of The Go-Go’s is also that it’s a band that should have ruled that entire decade, possibly even longer, but was cut short after only three albums. But Ellwood’s documentary does a wonderful job of presenting the reasons why the The Go-Go’s ended and presenting them in a way that comes to the conclusion it was inevitable.

Inevitable in a way that, when you hear each member explain what happened, everyone has a pretty valid point. Charlotte Caffey, who wrote most of the music, was battling a heroin addiction and couldn’t continue down this path. Belinda Carlisle, as the lead singer, was the face of The Go-Go’s, but made the second least amount of money because she wasn’t a songwriter. Jane Wiedlin finally quit the band when she was told she’d have to split her publishing money equally with the band, something she was willing to do going forward, but not backdated to their current album, Talk Show. And once Wielin quit, that was pretty much that.

But there’s still the music. And the music The Go-Go’s produced is still amazing. It’s the kind of music that can instantly put a person in a better mood. And this film comes alive every time the opening chords of the familiar hits start playing, or some of the footage from the early live shows when The Go-Go’s were still primarily a punk band. (It was Charlotte Caffey’s “We Got the Beat” that changed everything for the band, shifting the to a pop band and putting them on radio stations around the world.)

But the best thing about this documentary is that every singe member of The Go-Go’s is in “no fucks” mode. They are all at an age where they are going to be open and honest about what happened and not sugarcoat the details. I watched this back to back with the new Taylor Swift documantary, Miss Americana, which is probably what left me feeling hollow after watching Swift hem and haw and remain in such a PR mode for her film, I couldn’t even understand why it even existed. It was a startling juxtaposition. And proof that maybe documentaries should only be done when people have no fucks to give. And that’s why this Go-Go’s film still has the beat.