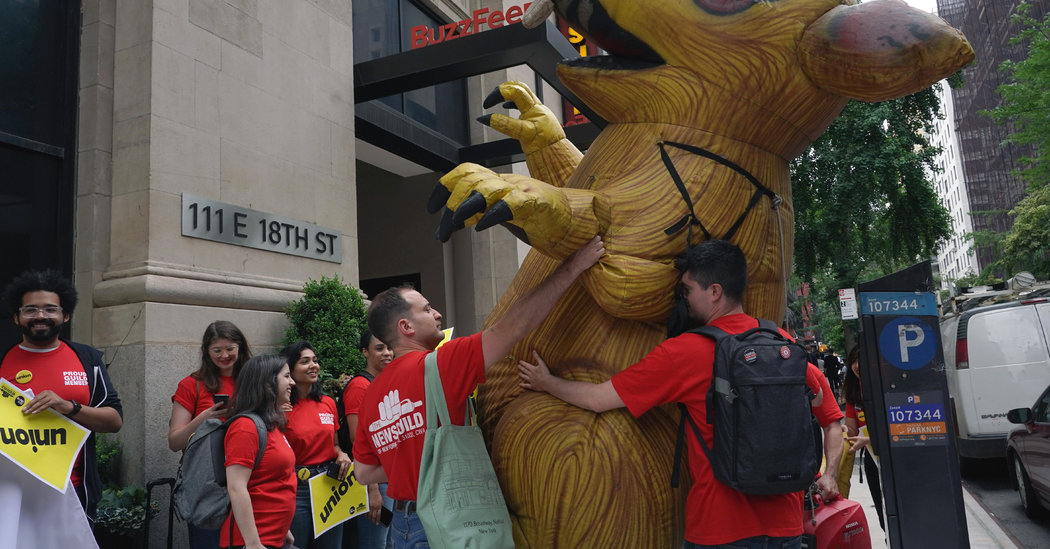 On June 17, five months after BuzzFeed’s newsroom was devastated by layoffs, a large inflatable rat appeared on the doorstep of the company’s Manhattan headquarters.

Scores of staff members, including those at its offices in San Francisco, Los Angeles and Washington, staged a walkout that day as part of an effort to force Jonah Peretti, the site’s founder and chief executive, to recognize a newly formed union. His position was well known at the time: collective bargaining was not a good idea for BuzzFeed.

His employees, known for generating infinitely shareable bits of digital culture (what color is this dress?), feared for the site’s future. The layoffs had claimed 15 percent of the staff, and an internal survey at the time revealed that only 56 percent of those still standing expected to be working at BuzzFeed in a year’s time.

On Tuesday, another bombshell: Ben Smith, the founding editor of BuzzFeed News, who expanded the editorial mission to include serious fare amid the meme-worthy material, announced that he would be leaving after eight years on the job to become the media columnist for The New York Times.

The news of his departure hit the staff at a time when BuzzFeed was on better financial footing than it was during the season of the rat. The site booked a profit for the second half of 2019, according to three people with knowledge of the business. They did not specify how large it was. For the year, the company generated around $320 million in revenue, or 6.6 percent above the previous year, the people said.

There’s an ironic twist to BuzzFeed’s newfound financial health: The closer the company gets to achieving a year’s worth of profit, the more its backers are likely to agitate for a return on their investments, either through a sale or a public offering.

Mr. Peretti acknowledged the possibility of a change in an interview on Thursday. “The most important thing is to do what’s right for the company,” he said. “And if being part of a larger company allowed us to grow our mission, I would be open to that.”

He also noted the recent “difficult period,” adding, “Our plan this year is for BuzzFeed as a whole to be profitable.”

The company’s financial boon underscores how BuzzFeed has changed from the internet laboratory Mr. Peretti hatched out of a small Chinatown office in 2006. The site once eschewed banner ads. Now it is filled with banner advertising and sells cookware at discount retailers.

An emphasis on native advertising — listicles and such sponsored by brands — eroded once Facebook opened its channels to companies, allowing them to post marketing messages on the site.

“We had to shift, and our team was able to adjust,” Mr. Peretti said.

BuzzFeed now has a growing commerce business that includes branded cookware at Walmart and an affiliate division that brings in money any time a reader buys something from an online store when coming from a link in a BuzzFeed article. Last year, those two businesses drove nearly $68 million in revenue, almost double that of the previous year, the people with knowledge of the company said.

Mr. Peretti thinks that model can be expanded. Readers, for example, who come across a story about a particular hotel might end up booking a stay there. BuzzFeed wants a commission for that transaction. He also has plans to create subscription revenue from events, what Mr. Peretti calls “paid social.”

Now that he has matured as an executive, Mr. Peretti, who in BuzzFeed’s early days seemed driven by a mad scientist’s interest in sussing out what people like to share online, has gotten more interested in translating his knowledge of digital culture into dollars.

At a company of roughly 1,100 people, the news division employs 200 journalists and costs about $18 million a year, according to two executives with knowledge of the company’s finances. Mr. Smith, who oversaw the layoff of dozens of journalists during what he described as “a tough week” last January, was given a mandate to find new ways to subsidize the newsroom, only to express frustration that BuzzFeed’s sales team rarely, if ever, sold ads against news articles, these people said. BuzzFeed News was eventually allotted two sales people of its own.

“I’ve been really pleased over the last year to see BuzzFeed investing in the business side of news,” Mr. Smith said in an interview.

“We want to do everything possible to continue Ben’s legacy,” he said. “We want to break news and be fearless and stand up to power to do all the things that define what BuzzFeed News is.”

The addition of a robust news division lent BuzzFeed prestige, but questions swirled around the effort as it got started in 2011, about five years after the site went live. Reporting is expensive, and investors questioned the cost. Other journalists were skeptical that a company known for memes could compete with established news organizations. But under Mr. Smith, BuzzFeed News was a two-time Pulitzer finalist and a winner of a National Magazine Award, a George Polk Prize and several other prizes.

Readers have sometimes confused the whimsical posts that BuzzFeed is known for with the news operation. BuzzFeed appeared to acknowledge the mixed brand message in 2018, when it moved the news articles to a new web address, BuzzFeedNews.com.

Despite questions from early BuzzFeed backers, Mr. Peretti saw the news division as vital. “There is a long tradition of media companies subsidizing or partially subsidizing news,” he said.

He said he sees the potential for its journalism to make enough money to pay for itself — though he didn’t specify how it could achieve that goal. “We want to operate as a whole in a responsible way that will allow it to grow,” Mr. Peretti said. “Sometimes to grow things you need to get costs in line and find operating efficiencies.”

A lot will depend, he said, on how Mr. Smith’s successor plans to manage the group.

Venture capitalists typically look for an exit at about the 10-year mark, when their funds usually close, and some early BuzzFeed investors have either passed that period or are hitting it this year. They can also get their money back by selling shares to another investor, known as a secondary offering. BuzzFeed’s current investors include the venture firms Andreessen Horowitz, Lerer Hippeau and NEA. NBCUniversal is also an investor.

But any sale or public offering would require Mr. Peretti’s endorsement. He has great influence over the board. The company’s recent growth, he said, “means we have the choice and freedom to stay independent. And we don’t need to raise more capital.”

BuzzFeed has so far raised $500 million at a valuation of $1.7 billion. Its investors are aware that, even as the company continues to grow, it is unlikely to attract buyout offers near that price, three people with knowledge of the matter said. They added that BuzzFeed could enhance its financial profile by merging with a competitor.

The picture they paint is one in which BuzzFeed combines with a business that would boost the total revenue to over $400 million, with about 15 or 20 percent of that accounting for profits before tax. The resulting company could then be more attractive to a big company, or make for a public offering.

In a 2018 interview with The Times, Mr. Peretti discussed the possibility of such deals. Last year, BuzzFeed was in talks with Group Nine, the publisher of sites like The Dodo and Now This, according to several people familiar with the matter. (Recode first reported on the discussions.) Complicating matters was that both businesses shared a board director, the venture capitalist Kenneth Lerer, who bowed out of discussions because of the conflict of interest. Around that time, he also stepped down as BuzzFeed’s chairman.

Group Nine is also helmed by Mr. Lerer’s son Benjamin Lerer, a friend of Mr. Peretti’s. The discussions about a deal went far enough that cost savings were analyzed. Group Nine and BuzzFeed have sizable video operations, and a tie-up would have meant cuts in that area, the people said.

Later in the summer, the talks ended, according to three people with knowledge of the discussions. One issue was who would manage the new business. Scenarios included either Mr. Lerer or Mr. Peretti as chief executive, with the other as chairman of the board. That question was never resolved.

“I’ve known Ben Lerer a long time,” Mr. Peretti said in the Thursday interview. “I had a conversation with him, and I’ve had conversations with C.E.O.s of a lot of other companies, and I think there’s value to being in the mix and talking to people and being open for the right deal at the right time.”

Mr. Lerer said the timing of the talks was not right, adding, “or else we would have done something.” Last year, Group Nine acquired PopSugar, a digital publisher focused on millennial women. He left open the possibility that a BuzzFeed deal could still take place. “I have immense respect for Jonah, and I will always have an open dialogue with him and others,” Mr. Lerer said.

A month after the June walkout, BuzzFeed recognized the union, the News Guild of New York, which also represents Times employees. Mr. Smith was charged with handling the matter from the management side, and he was keen to come to an agreement with the staff.

He was also growing restless. In the past few months, he wrote more than a dozen articles, a change from the recent past, when his byline appeared a few times a year. In November he wrote a column analyzing the succession planning at The Times. Dean Baquet, the executive editor, will retire in a few years, and Mr. Smith offered a lengthy exegesis on who might succeed him.

In December, at the Lambs Club, a restaurant on West 44th Street, Mr. Smith met with Mr. Baquet and Sam Dolnick, an assistant managing editor of The Times and a member of the Ochs-Sulzberger family that controls the paper. They discussed the media-columnist job over lunch.

“I thought, ‘Wow that would be a lot of fun,’” Mr. Smith said. “I had been eager to get back to reporting for a while. This made sense.”

Mr. Smith, who starts March 2, won’t be a part of The Times union.