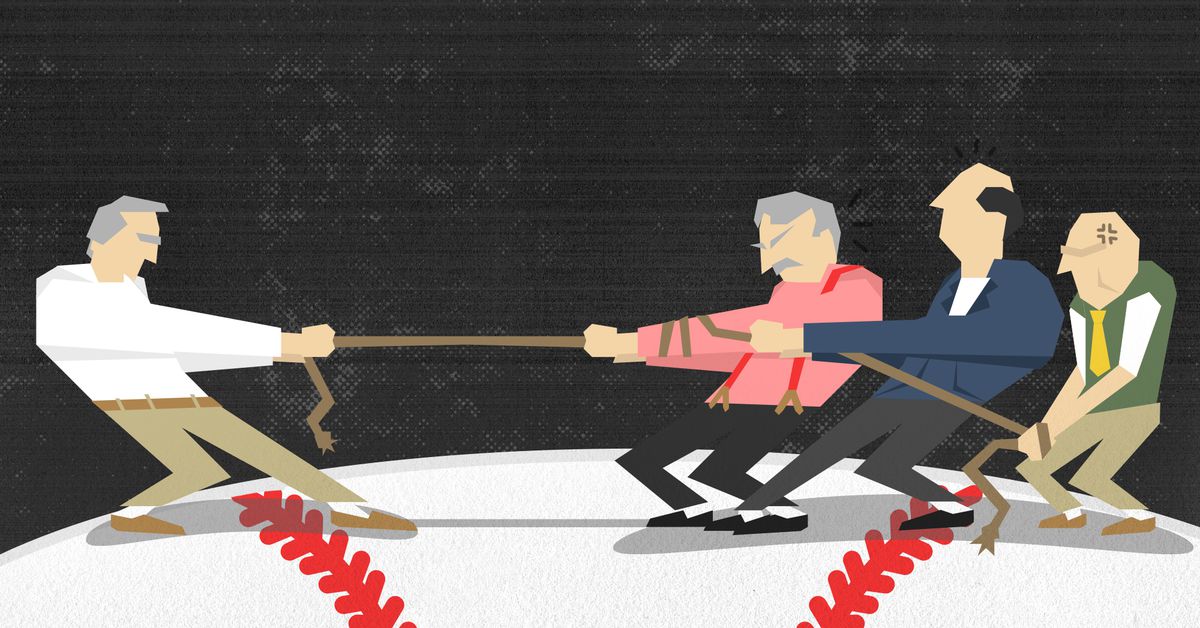 We are living in the age of scandal, each one more shocking and outrageous than the last. Who can keep track of them all when each day feels like a struggle for survival? Against that backdrop, history can seem as if its become engulfed in a circular time warp, endlessly spinning off its axis.

Yet, some moments demand to be preserved and re-examined because they reveal something real and tangible beyond a headline or a tweet. Take Collusion. That’s now something of a buzzword in baseball circles. But Collusion also refers to a real historical event, which exposed the inner workings of the sport. In the 1980s, baseball’s owners stumbled haphazardly into an ill-conceived plot to assert control over an economic system they could no longer contain.

For three years between 1985 and 1987, Major League Baseball clubs conspired to freeze the free agent market to such a degree that players had no choice but to re-sign with their former teams for a fraction of what they were worth. As with most MLB schemes, it was doomed to failure due to a combination of hubris and greed.

The roots of collusion were sown following the 1985 season. Coming off his great triumph — commercializing the 1984 Olympic games for the enrichment of the organizers, but not the athletes — Peter Ueberrorth was a made man when he agreed to become commissioner of baseball.

As recounted in John Heylar’s seminal Lords of the Realm, Ueberroth dressed down the baseball owners for outbidding each other on long-term contracts with free agents. He asked the owners what their policies were for signing free agents, if they even existed at all. At one point he turned to his counsel and said, “Stop this discussion if any point it smacks of collusion.”

As Heylar relates, Ueberrorth went on to tell the owners it was their fault that salaries were so high and to stop blaming the players. They were smart businessmen, he said, and they should act like it. Everyone agreed there was a problem, Ueberroth said, according to testimony in a later grievance. “Go solve it.”

It was the “Go solve it” part that was at issue. Ueberroth later denied he said those words, but the message was clear. That winter, 29 of the 33 free agents went back to their original teams, hat and glove in hand. Not even George Steinbrenner’s Yankees would make bids on free agents.

Collusion carried on into 1986 when a more robust free agent class found the market even more tense. General managers were now telling one another who they wanted to pursue and for how much. The phrase that carried the day was “fiscal responsibility.” Industry revenues went up, while player salaries went down.

As big-name players continued to be left out in the cold, Montreal star Andre Dawson went so far as to offer the Cubs a blank contract. The club could fill in the amount, which they did for the outrageously low sum of $500,000 with $200,000 in incentives for a player who would go on to win the Most Valuable Player award.

In the midst of all this, Ueberrorth went on the offensive against drugs, specifically cocaine use, by instituting mandatory drug testing. The players union cried foul, saying drug testing was a collective bargaining issue. An arbitrator named Thomas Roberts found for the union, so the baseball owners fired him.

That was a mistake on two levels. First, Roberts had begun hearing the first collusion grievance and an arbitrator couldn’t be fired in the middle of a grievance. Roberts was a deliberate man. He didn’t make a ruling on collusion until September 1987, when he found for the union. The delay allowed the conspiracy to continue unabated.

The second part of the mistake was that Roberts was eventually replaced by George Nicolau, who would hear the second and third round of collusion hearings. Nicolau was a formidable presence in the hearings. As a union lawyer named Steve Fehr put it, “The clubs’ case was obviously falling apart. George Nicolau was asking tougher questions than I was.”

In what became known as Collusion II, Nicolau found for the players, writing:

“‘What transpired in 1986 occurred because everyone ‘understood’ what was to be done. By common consent, exclusive negotiating rights were, in effect, ceded to former clubs. There was no vestige of a free market, as that term is commonly understood. The object was to force players back to their former clubs and the expectation was that all would go back in a replication of 1985, requiring nothing more to be done.”

Undaunted, the owners tried a new tack with the creation of a so-called Information Bank. Essentially, they created a centralized system in which teams would “deposit” their terms into the bank and “withdraw” information on other players. The idea was to prevent some team from coming in and offering too much, thus blowing up their carefully planned salary structure.

Of course, it only takes one team to upset that balance and of course, that team was Steinbrenner’s Yankees who made a play for slugger Jack Clark. As owners went back to the time-honored tradition of distrusting one another, the market began to thaw.

Ueberroth continued to insist he had done nothing wrong. Technically, he didn’t come right out and say the words “collusion,” but then, he didn’t have to. The owners got the message and Nicolau found for the players a third time.

“It must be remembered that the bank was unilaterally established shortly after Chairman Roberts’ decision, following two years in which bids for free agents desired by their former clubs were either nonexistent or virtually so,” Nicolau wrote. “Against that backdrop, the bank’s message was plain — if we must go out into that market and bid, then let’s quietly cooperate by telling each other what the bids are. If we do that, prices won’t get out of line and no club will be hurt too much.”

Now the question was what to do about it. Roberts and Nicolau had made several players “second-look” free agents, which allowed them to re-enter the market. On the question of damages, the players were awarded $285 million.

Despite undergoing a concerted effort to suppress salaries and effectively weaken their own teams competitive prospects, no one was ever fined or suspended for their role in the scheme.

The Collusion Years have all but disappeared from memory, but owners have continued to find ways to corral their spending habits. Nowadays the backstop is a luxury tax, a legally permeable but wildly effective deterrent in keeping salaries down.

Nicolau’s place in history has also been widely ignored. He died early 2020 at the age of 94 following a long and fascinating life. The son of Greek immigrants, he enlisted in the armed forces right out of high school at the height of World War II. Nicolau served as a navigator in B-17 bombing missions. On his fourth and final mission, his aircraft came under fire that shattered his leg resulting in an amputation above the knee.

“If I had been hunched over it would have shattered my head,” Nicolau told Michel Picher in a lengthy interview. “But it threw me about four or five feet against the bulkhead and I thought, well, I wonder what this is going to be like.”

After leaving the service, Nicolau attended the University of Michigan on the GI bill where he graduated with a degree in political science and economics. He then went to Columbia for law school with an eye on becoming a labor lawyer.

He did work for the Newspaper Guild and the Actors Equity Association before leaving in 1963 to join the Peace Corps. While in the Peace Corps, he convinced George Meany, head of the AFL-CIO to allow union workers to take leaves of absence from their jobs to train others in their mechanical areas of expertise.

Following his stint in the Peace Corps, Nicolau worked in various capacities for, among other things, the Office of Economic Opportunity and then-mayor John Lindsay in New York on anti-poverty programs. He also began involving himself in labor mediation and arbitration, helping write a training manual and establishing mediation protocols in prisons.

He also met Peter Seitz, the arbitrator who in 1975 found for the players in the Messersmith-McNally case that gave players the right to free agency. It was Seitz who encouraged Nicolau to become a full-time arbitrator.

Some years later, Nicolau was introduced to Bill Bradley, the former Knicks player who had been elected to the senate. Bradley introduced him to Larry Fleischer, the executive director of the NBPA and Nicolau was eventually brought on as an arbitrator. He also served in that role for the NHL and indoor soccer.

Among the cases he heard during his time with the NBA involved Bernard King who had been suspended without pay by the Utah Jazz following a cocaine arrest. The question was whether the team could suspend the player without pay. Nicolau said they could not.

Drugs became another part of his legacy years later when the case of Steve Howe came before him. Howe had been suspended six times for cocaine use and was granted one final chance by then-commissioner Fay Vincent. Howe pitched well for the Yankees, but was arrested once again for trying to purchase cocaine in Montana during the offseason. Vincent banned Howe for life.

In the grievance hearing, Nicolau suggested that a psychiatrist be brought in to examine Howe. The psychiatrist determined that Howe suffered from Attention-Deficit Disorder and that was the clear cause for his addiction. “So all of the time he had been in rehab,” Nicolau told Picher. “All of the time he had been suspended, no one ever picked this up, that there was some underlying cause.” Howe was reinstated.

Vincent proceeded to haul in various members of the Yankees to his office including manager Buck Showalter and general manager Gene Michael to tell them their testimony in Howe’s grievance had gone against the best interest of baseball. Vincent told them they had, “effectively resigned from baseball.”

The Yankees had a game that day and Showalter arrived just before the first pitch, shaken. The press naturally picked up on it and turned on Vincent in the natural style of New York tabloids of the early 90s. As Heylar wrote, “Between the media firestorm and the pointed words of arbitrator George Nicolau, Vincent backed off.”

Some 35 years after Collusion, the landscape has shifted but it has largely remained the same. Money has poured into sports by the billions, yet we still live in an environment where the lords make the rules and enforce them at their convenience. Teams continue to preach the gospel of fiscal responsibility, while at the same time shaking down cities for tax breaks and sweetheart land deals.