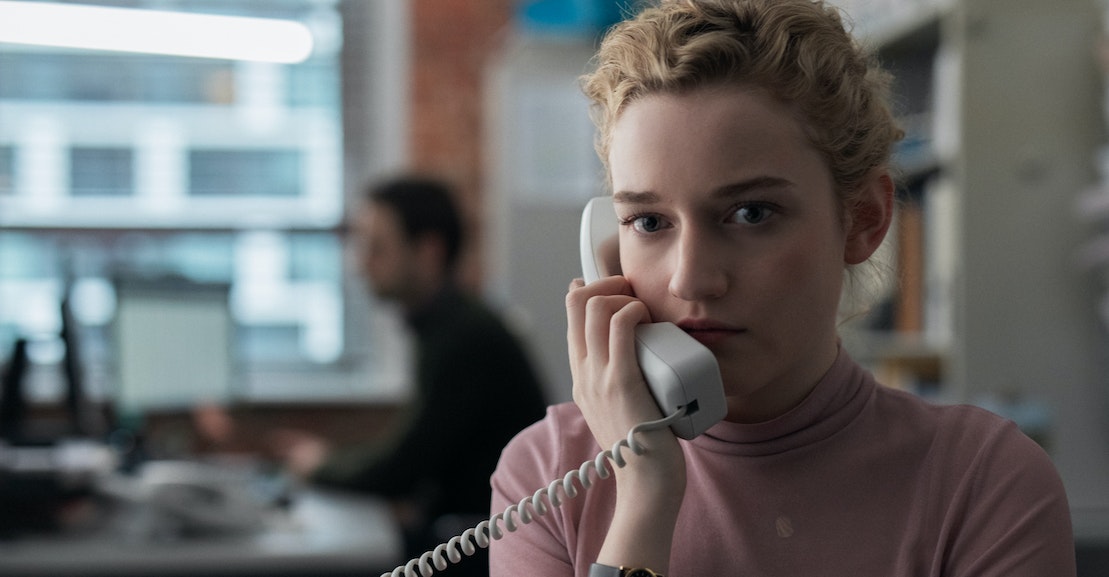 “Dream job” is a funny term because should we not dream of more? I love my job, but it speaks to our convoluted relationship to work that we’d describe it in terms so spiritual. Anyway, it’s worth remembering that the logic of the subconscious is illogical; dreams so easily become nightmares.

The Assistant, by director Kitty Green, known for documentaries like Casting JonBenet, examines that particular tension. It’s a patient, deliberate, and chilling film, a damning indictment of the power structures that define so much of American life. It’s one of the best movies about work that I’ve ever seen, so it’s pretty remarkable that it’s also a movie with so much to say about sexual transgression, the patriarchy, and morality.

The assistant of the title is named Jane (Julia Garner), but that barely seems to matter: Few people address her by name, underscoring how dehumanizing her work is. The film tracks her movements over one day; it begins predawn, with Jane leaving her outer-borough apartment in a black car. Like a cowboy on a horse, she rides through the canyons of Manhattan, her destination the office of the production company where she is (what else?) assistant to the head honcho.

There’s a palpable sense of foreboding, and perhaps the film should carry a trigger warning for anyone who’s ever been low on the totem pole in any kind of office. The ambient sounds (the drone of fluorescent lights, the convulsions of a photocopier, the ringing of various telephones) provide the soundtrack and are far less joyous than the clacking typewriter beneath Dolly Parton singing “9 to 5.” The way the camera stalks Jane, you cannot but think of horror films. Garner is fair, blonde, dressed in pink—virginal, but remember that it’s often virgins who are sacrificed.

Despite deploying the cinematic language of the thriller, the story’s concerns are all in a day’s work: Jane flipping on lights, making coffee, eating cereal. (There’s a viewer who will find this movie boring.) Then, when the workday begins, Jane tending to the unglamorous labor upon which so many offices rely: disseminating handouts, making schedules, coordinating travel. In her capacity as the assistant to the boss, Jane is both essential and invisible. She’s close to the seat of power, but she’s charged with literally keeping that clean. Garner is as pretty as a silent screen star, and I loved watching her wipe down the boss’s desk chair or wash dishes in the communal kitchen. I’ve been both a parent and an assistant to a high-powered executive type; the jobs are almost identical.

The boss in question is unseen but very present. He’s the barely intelligible growl through the telephone, or just glimpsed in the scrum of bodies moving through the maze of cubicles, but also in every action of every character we meet. He’s the sun around which this little universe revolves, and I thought of Jimmy Stewart’s imaginary rabbit pal, Harvey, which is apt, since I’m meant to think of Weinstein.

We don’t see any transgression, only the ripple effect of such. Everyone in the office is in some fashion implicated in what they are determined to believe are peccadilloes and not crimes. Jane finds an earring on the floor of her boss’s office and arranges to return it to the young woman who left it behind; it was clearly lost in a scuffle we’re grateful we didn’t have to watch. Comely young women are hustled into the office for private meetings, and Jane is charged with parrying the phone calls of the boss’s persistent wife.

Green is smart enough to recognize that she needs drama in this understated film. The unexpected arrival of Sienna, a very young woman the boss met in Idaho, is a breaking point. She’s a waitress but has been promised an assistant job just like Jane’s. It’s impossible for Jane to comprehend whether she wants to protect this naïve girl or defend her own territory (is her motive pure or self-interested?). Choosing the worst of all possible routes, she goes to H.R. In a brief but superb scene, the middleman she meets, Wilcock (Matthew Macfadyen), reminds her how hard it is to get entry-level work in the movie business. He deflects the concerns that Jane can only barely articulate: The boss’s behavior might be wrong, but morals cannot be enforced. Anyway, he points out in one of the movie’s best moments, Jane isn’t the boss’s type. She’s safe.

The big boss might be one bad apple, but the whole enterprise is an apple pie. The other assistants, both men (Jon Orsini and Noah Robbins), are titillated by the boss’s sexual appetites. They coach Jane on how best to get rid of his bothersome wife and how best to apologize to him when she’s incurred his wrath. These assistants seem like jovial boys, but the movie is clear in implicating both them and everyone else in the boss’s misdeeds.

Does that include Jane herself? Jane’s ambition is to produce films. In her meeting with H.R., Wilcock notes, “We could use more women producers.” The bargain she’s made in performing this job is the chance to someday realize that dream. In those impossible-to-hear phone conversations, her boss berates her, but later he sends her an email: “I’m tough on you because I’m gonna make you great.” This is all just how offices work, right?

I applaud the movie’s ambiguous conclusion. While the boss is behind closed doors with yet another would-be starlet, his driver and some executives are waiting for him in the street, his private plane is waiting for him at Teterboro, another driver is waiting to meet him in Los Angeles. We’re all waiting, aren’t we, for the men caught up in the movement termed #MeToo to face some actual consequence. Jane just leaves the office, sits at a bodega, and eats a muffin; she knows it’s going to be a long wait.