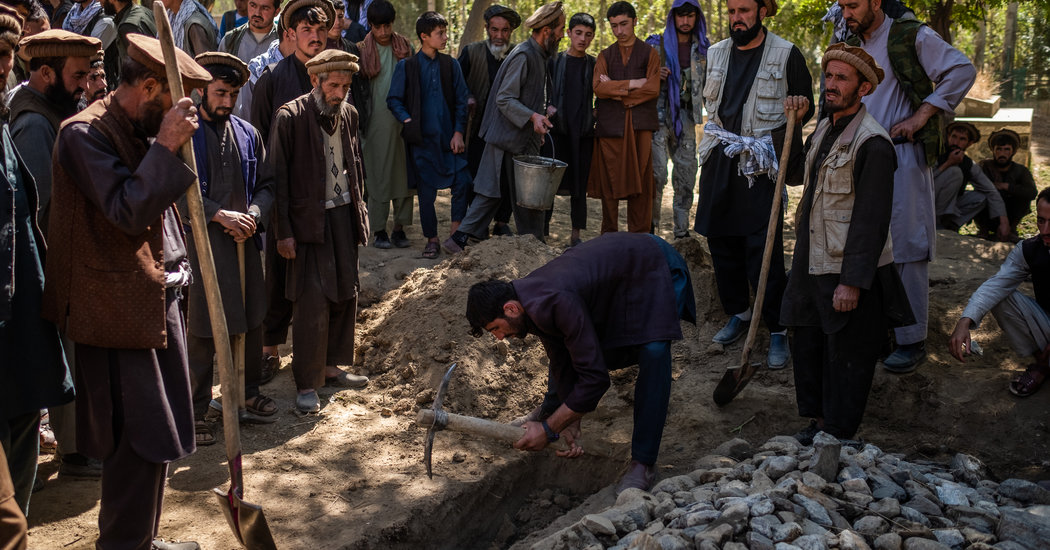 WASHINGTON — The Taliban and other groups carried out a record number of attacks in Afghanistan during the last several months of 2019, according to an inspector general report released Friday. The increase in violence occurred during a period in which President Trump tweeted that the United States was “hitting our Enemy harder than at any time in the last ten years!”

The number of attacks, detailed in the quarterly report from the Special Inspector General for Afghanistan Reconstruction, a government watchdog formed in 2008, highlights once more the disparity between talking points on suppressing the Taliban and the reality on the ground: Despite a concerted bombing campaign and American and Afghan offensive ground operations, Taliban fighters are still able to attack at levels similar to those a decade ago.

The Taliban and other armed groups carried out 8,204 attacks in the final quarter of the year, 37 percent of which inflicted casualties, according to the report.

The tally is one of the few remaining public barometers for the United States’ war effort in Afghanistan after the American military command there stopped releasing or classified others, such as the number of Afghan casualties and the percentage of districts controlled by the Afghan government versus Taliban forces.

“There’s so little you can publicly talk about that garners importance,” John F. Sopko, the special inspector general for Afghanistan reconstruction, said Thursday.

This type of information has been used in the past to extrapolate a trend toward victory or defeat over the course of the war, but ultimately it has foretold little in the United States’ longest conflict.

The expansion of the ongoing American air campaign seemed to mirror the increase in Taliban attacks.

In 2019, American military aircraft dropped 7,423 bombs and missiles — a record number since the Air Force began recording the data in 2006, according to recently released Air Force documents. At the beginning of the year, American Special Operations missions had increased by 124 percent from 2018, according to military documents, a rate that most likely continued throughout 2019.

In 2019, the American military command in the country, led by Gen. Austin S. Miller, focused on inflicting heavy casualties on the Taliban in an effort to keep its leadership involved in peace negotiations taking place in Doha, Qatar. The offensives also aimed to push back the insurgent group to both lower Afghan casualties and hold what territory remained under government control.

After a car bomb in Kabul, the country’s capital, killed an American soldier and 11 others in September, Mr. Trump called off the peace negotiations that were on the verge of a deal that could lead to the start of talks between the Taliban and the government in Kabul. The insurgent group has so far refused to talk to the Afghan government.

American and Taliban negotiators restarted the talks in December and are once more close to agreeing on a deal, American officials say, although the negotiations have been bogged down as the two sides wrestle over how to reduce violence in order to move the peace process forward. The Afghan government wants a monthlong cease-fire, and the Taliban has scaled back some attacks — but only on cities and main roads.

“It goes to show nothing much has changed,” said Jason Dempsey, an adjunct senior fellow at the Center for a New American Security. “But if anything, it shows that the war in Afghanistan might be winding down in the eyes of the American public, but it certainly is reaching a pitched level in the country itself.”

A Defense Department official attributed the higher number of Taliban attacks in the inspector general’s report to the fact that the insurgents were attacking more frequently, albeit in small numbers — a byproduct of the American air campaign and joint United States-Afghanistan ground missions.

Similarly, September saw the “highest number of enemy-initiated attacks in any month since June 2012 and the highest number of effective enemy-initiated attacks since recording began in January 2010,” according to the inspector general report. But the increase in military operations from the United States, the Afghan government and the Taliban are not without cost. There were more than 8,000 civilian casualties in Afghanistan in 2019, according to United Nations data.

More than 50,000 Afghan security forces have been killed since 2014, often with several dying a day across the country. The Taliban control more territory than at any time since the beginning of the war.

Ultimately, the Taliban want a complete withdrawal of American troops, while the Americans eventually want joint talks between the Taliban and other Afghans over power-sharing in the government.

There are roughly 12,000 American troops in Afghanistan, and the Pentagon is planning to reduce the number to 8,600 in the next few months, with or without a signed peace deal.

Twenty American troops died during combat operations in 2019, the most in any year since 2014. Two soldiers were killed earlier this month by a roadside bomb. And on Monday, Lt. Col. Paul K. Voss and Capt. Ryan S. Phaneuf died when their E-11 jet crashed in Ghazni Province, most likely because of mechanical issues.