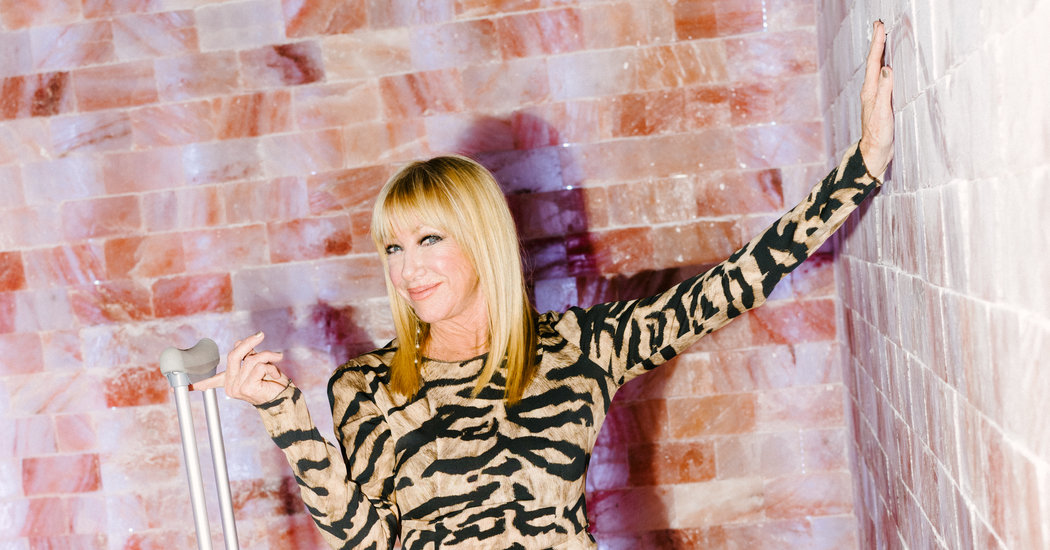 “I’d love to say it was because I had too much sex,” Suzanne Somers said.

But the truth behind her crutch would hardly make Chrissy Snow blush: a stress fracture, made worse by a tumble from the private tram to her 93-acre compound in Palm Springs, Calif, while partying with friends. Surgery ensued, followed by weeks of bed rest.

“I just got out of bed three days ago, and here I am in heels,” she said, peeling off a black Norma Kamali sleeping bag coat to reveal a slinky tiger-print Dolce & Gabbana dress and matching Manolo Blahnik heels.

She was at Modrn Sanctuary, a moodily black-walled spa on West 27th Street in Manhattan on a frigid Wednesday afternoon, looking to decompress after “The Dr. Oz Show,” where she was promoting her 27th book, “A New Way to Age” (that’s 26 more than Emily Bronte).

Pleasantries dispatched, Ms. Somers managed a vampy strut — as vampy as you can strut with a crutch, anyway — down a hallway that features “wellnes” offerings so “modrn” that extraneous letters are scarcely needed. Ms. Somers opted for the halotherapy, or salt therapy, in which she would sit in a chamber made of 10,000 pounds of pink Himalayan salt.

“Himalayan salt is all about the minerals,” she said, extolling the putative health benefits of magnesium replenishment, although the room’s luxe decor and pink light felt more like a bottle-service lounge at a Hollywood nightclub. “I’ve got Himalayan salt lamps throughout my house.”

Leaning her crutch against the wall, she reclined on a large white chair, dangling her exposed legs off one end and thrusting out her chest, as if posing for a 1950s pin-up shot.

Ms. Somers still invites the male gaze, or really, any gaze. To mark her 73rd birthday last October, she posted a nude photo of herself on Instagram, crouched in a field of wildflowers. “A sexual person is a healthy person,” she said.

Her sex-positive image is the cornerstone of a business empire built on health and diet books, cosmetics, supplements, branded salt rubs, protein shakes and, of course, Thighmasters, those overgrown binder clips immortalized in 1990s infomercials.

It also grounds her current role as an anti-aging guru. Her new book is a series of interviews with wellness-minded doctors on topics such as bloating, constipation, low libido and pain management, with a heavy emphasis on bioidentical hormone-replacement therapy (a controversial anti-aging practice that replenishes hormones such as progesterone and testosterone with plant-based duplicates).

She has been leaning on hormone creams and supplements made from yam extracts for 25 years. “Aging is about worn out parts,” she said, adding that the results are evident in her youthful hair, relatively wrinkle-free skin and her bedroom prowess.

Running her stockinged toes through the pebble-sized salt crystals, Ms. Somers said that she enjoys daily sex with her husband, Alan Hamel, another hormone-replacement devotee who is ten years her senior and was once, she said, “the Johnny Carson of Canada.”

“He makes incredible organic coffee in the morning, brings it to me in bed, and waits for me to give him a thumbs up,” Ms. Somers said.

It’s not just coffee that keeps them buzzing. Although her father had been a “terrible alcoholic,” she said, Ms. Somers got into tequila recently and considers her nightly cocktails with her husband a form of sacrament. “It’s an upper, a little hallucinogenic,” she said, as if channeling Carlos Castaneda extolling peyote.

A wellness regimen that goes heavy on sex and alcohol might seem at odds with the celery-cleanse spirit of contemporary Goop culture. But Ms. Somers has never been afraid to flout convention.

Back in the 1970s, when networks were leaning into socially-aware sitcoms like “The Mary Tyler Moore Show” and “One Day at a Time” that were centered around independent women, Ms. Somers got famous as a peroxide-blonde confection in micro-shorts whose emotional development seemed frozen at nine years old.

But, she said, sitting up straight in her chair, she has no regrets about playing Chrissy Snow in “Three’s Company,” even as seen through the prism of 2020 gender politics. “I would have played a monkey,” she said with a shrug. “I needed the part.”

Besides, Ms. Somers added, she considered it an intellectual challenge to give a “dumb blonde depth.” “I gave her a moral code,” she said. “She would never tell a lie. And she had a sense of outrage, like Edith Bunker.”

She said she got fired when she asked for a salary more in line with the network’s male stars. “Six years into it, it’s the No. 1 show, and the men were making 10 to 15 times more,” she said.

It was a bold feminist move, she admits. “I believe that we should be paid commensurate with our ability to bring in revenue,” she said, leaning forward in her chair.

Ms. Somers is notably lacking in #MeToo-era outrage. “I’m not wearing pink pussyhats, and I never will.” She said she never experienced advances that she considered threatening.

It was a different era, she said. “Men used to come on to women, and either you liked it or you didn’t,” she said. “You go to a bar, you might get picked up, and it’s up to you. It’s not like, ‘You want me to sleep with you, you pig?’”

“Even innocent flirtation is fun,” she added, smiling coyly.