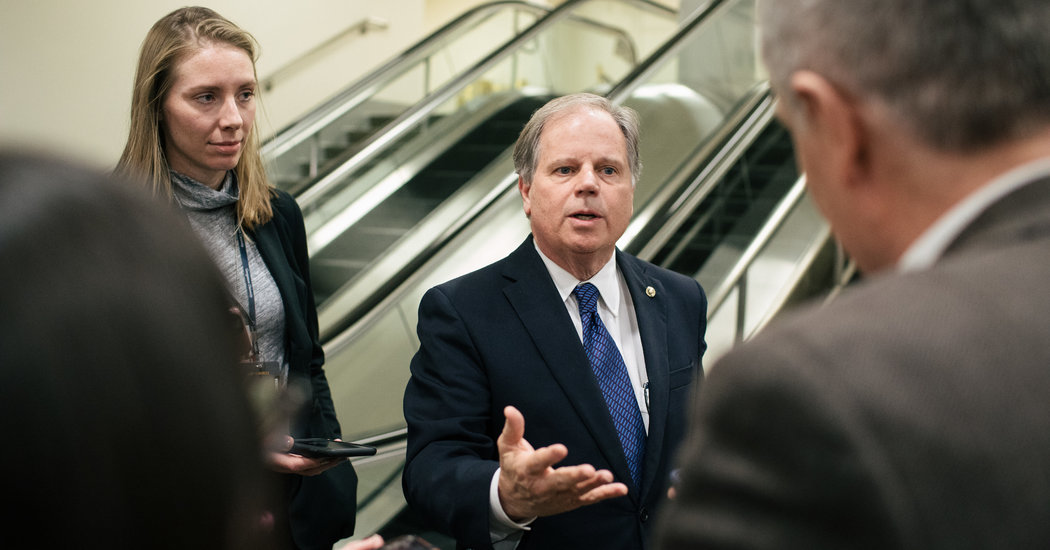 WASHINGTON — Nothing would please President Trump more than to wrap up his impeachment trial with support from a handful of Democrats. He might get his wish.

As the Senate nears a vote on Mr. Trump’s fate, possibly as early as Friday, attention has focused on the few moderate Republicans who might break ranks by voting to hear from witnesses or perhaps even to convict. But Democrats have their own list of possible defectors who could vote to acquit.

They are focusing on four Democrats from states won by Mr. Trump: Senators Joe Manchin III of West Virginia, Kyrsten Sinema of Arizona, Doug Jones of Alabama and Gary Peters of Michigan. Should one or more vote to clear the president on either of the charges he faces, it would hand him a coveted talking point during an election year — and deliver a blow to Democrats, who lost two votes in the House when Mr. Trump was impeached in December.

“Every one of us knows — and if our leadership didn’t know, we would tell them — that this is an individual decision every senator has got to make,” Senator Bob Casey, Democrat of Pennsylvania, said in an interview, adding that Democrats’ closed-door meetings did not include discussions of how members would vote. “So I don’t know how that plays out, or what the numbers will be.”

Mr. Jones suggested Wednesday morning that he was open to acquitting Mr. Trump on one of the charges, obstruction of Congress, though he said the president’s behavior was strengthening the case against him. Mr. Trump is accused of abusing his oath of office and obstructing Congress in connection with his decision to withhold military aid from Ukraine while pressuring that country’s leader to investigate his political rivals, and concealing his conduct from lawmakers.

“I’m still looking at that very closely,” Mr. Jones said, without elaborating. “There are some things that trouble me about it. But I will tell you this about the obstruction charge: The more I see the president of the United States attacking witnesses, the stronger that case gets.”

Mr. Jones won a special election in 2017 in deeply conservative Alabama after defeating a Republican, Roy S. Moore, the former chief justice of the state Supreme Court who was accused of sexually assaulting teenagers when he was in his 30s. Now Mr. Jones faces re-election and a crowded Republican primary race that includes Mr. Moore and Jeff Sessions, Mr. Trump’s former attorney general.

His voting record is largely with his party — he has sided with Mr. Trump only 37 percent of the time, according to the website FiveThirtyEight — and he has been vocal in his demand for witnesses, including in an opinion piece in The Washington Post that raised questions about whether his colleagues would commit to finding “the whole truth.”

But there will be a backlash against Mr. Jones at the ballot box in November if he votes to convict the president, said Scott Jennings, a Republican strategist and former adviser to Senator Mitch McConnell of Kentucky, the majority leader.

“I know that if I’m the senator from Alabama and I vote to throw Donald Trump out of office and off the ballot,” Mr. Jennings said, “my chances drop from whatever they were to zero.”

For his part, Mr. Manchin said on Wednesday that he was frustrated with what he called the “hypocrisy” of Senator Chuck Schumer of New York, the Democratic leader, and Mr. McConnell. Both have reversed positions they took in 1999 during the impeachment trial of President Bill Clinton, when Mr. McConnell was for impeachment and Mr. Schumer was against it.

The West Virginia senator has spoken strongly in favor of having witnesses testify. But he has irked fellow Democrats by saying that Hunter Biden, the son of former Vice President Joseph R. Biden Jr., whose work for a Ukrainian energy company has been an issue in the trial, might be considered a relevant witness. Asked about that on Wednesday, Mr. Schumer grew testy.

“We have had total unity on the issue that will be before us,” he said. “It’s not up to Joe Manchin whether to call Hunter Biden.”

Mr. Manchin is hard to predict. At the outset of the administration, Mr. Trump courted him and tried to persuade him to become a Republican. But Mr. Manchin stuck with Democrats in voting against repeal of the Affordable Care Act and against Mr. Trump’s tax bill. Then he crossed party lines to become the lone Democratic vote in favor of confirming Judge Brett M. Kavanaugh to the Supreme Court.

He has been using his Twitter feed to encourage his constituents to call or email a new address his office has created: impeachment@manchin.senate.gov.

“It’s not as simple as saying, ‘It’s a red state, he’s a conservative Democratic senator, therefore he’ll do X or Y,” said Mike Plante, a Democratic strategist in West Virginia. “This is history. It’s not simply politics.”

Ms. Sinema’s intentions are even more difficult to determine. She issued a statement at the outset of the trial saying she would “treat this process with the gravity and impartiality that our oaths demand” and has refused to talk to reporters ever since. She has been virtually silent on social media about impeachment.

But after Mr. Trump’s defense team wrapped up its opening statements on Tuesday, Ms. Sinema remained in the Senate chamber for more than 10 minutes, deep in conversation with Senator Lamar Alexander, Republican of Tennessee and a close ally of Mr. McConnell. On Wednesday, during the question-and-answer portion of the trial, she asked a question that seemed intended to undercut the president’s defense: Why was the aid to Ukraine withheld in secret?

“Kyrsten is in an interesting spot because she ran in her campaign as a moderate but also really stayed away from the partisan politics — she always referred to what Arizonans want, making it very local,” said Mike Noble, a Republican strategist in Arizona. “So she’s kind of doing this balancing act.”

Then there is Mr. Peters, who has cut a low profile in the Senate — and at home, which is one reason he faces a tough race. “I am in the undecided category,” he told reporters in the Capitol. “I’m going to listen, give it a fair hearing.”

Mr. Trump already promotes the House’s vote to impeach him as bipartisan vindication, citing the two Democrats (Representatives Jeff Van Drew of New Jersey, who has since become a Republican, and Collin C. Peterson of Minnesota) who voted against. The president’s allies caution that he does not expect a repeat in the Senate, though he would be pleased to see it.

“While it would be ideal to have a Democrat or two cross over and oppose impeachment like we saw in the House vote, I don’t think it matters in the grand scheme of things,” said Andy Surabian, a Republican strategist and former adviser to Mr. Trump, adding, “Most Americans outside of the Beltway have tuned this entire impeachment circus out of their minds.”

Mr. Schumer has said he is not counting votes and is instead encouraging each senator to follow his or her conscience. On Thursday, he brushed aside a question about possible Democratic defections, saying he was solely focused on getting the four Republican votes he needed to force the Senate to subpoena witnesses.

“That’s where the focus will be,’’ he said. “Our caucus is totally united on that issue, which will determine where we go from there.”

Mr. Jennings said at least one thing was nearly certain: “Trump is going to claim exoneration no matter what.”