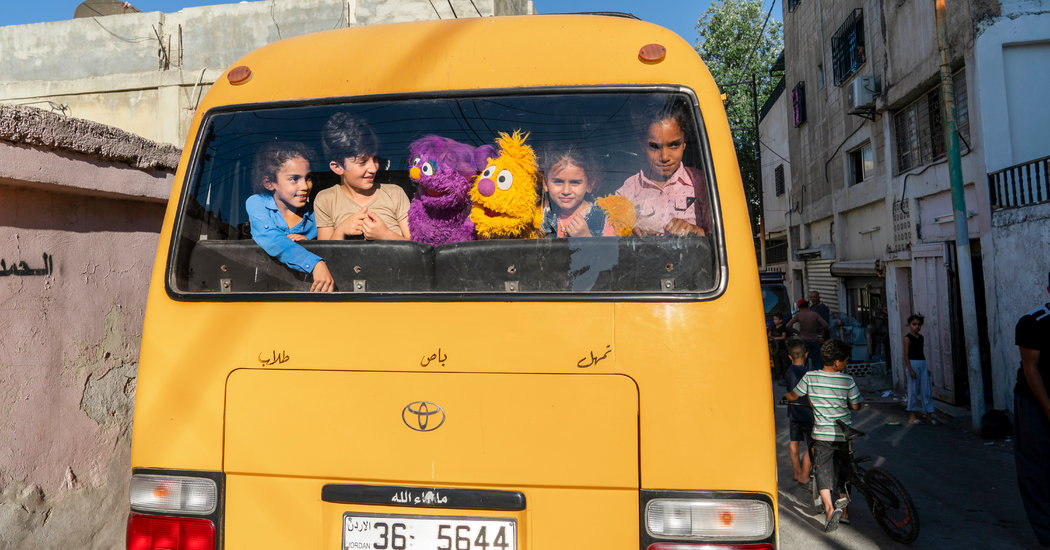 In its 50 years on television, “Sesame Street” has presented an expansive idea of the challenges of childhood, offering lessons on divorce, racism, grieving and autism — as well as help with the alphabet and accepting friends who are a bit taller and more birdlike.

Next week, a new version of the show will begin airing for an audience that, less than a decade ago, didn’t exist: children displaced by the war in Syria and their neighbors in the communities where many of the refugees have fled or sought asylum. “At this point, there are lots of seven-year-olds who were born as refugees from Syria” and remain far from permanent resettlement, a staff member on the project said recently. “That’s not changing soon.”

Since the start of the conflict, in 2011, nearly seven of every 10 residents of Syria have been forced from their homes. More than 11 million have fled to unfamiliar parts of Syria or to the countries across its borders, with only around 150,000 permanently resettled. They are now the largest displaced population in the world. And displacement, in the Middle East and elsewhere, lasts longer than ever before: “Once refugees are displaced for at least five years, as is the case for most Syrian refugees,” the president of the International Rescue Committee, David Miliband, said at a Senate hearing last year, they’re likely to stay displaced for more than two decades.

“Sesame Street” began as an experiment in television and became a global model for early-childhood education. Its new project, launched with the I.R.C. and educators in Syria, Iraq, Jordan and Lebanon, is an effort to rethink humanitarian aid. “Aid is good at keeping people alive,” Mr. Miliband has argued. “But it doesn’t give them the tools to thrive.” It has traditionally been directed to immediate needs — nutrition, security, shelter — but displacement that can last for decades presents a very different kind of problem.

Parents often carry the trauma of forced migration with them in unexpected ways, and a childhood of makeshift housing, isolation from an extended community of familiar faces, and few safe places to play can affect not only their behavior and learning skills but also brain development, gene expression and the ability to build the fundamental tools of resiliency. “It can be very hard to moderate, or to cope,” said Sherrie Westin, Sesame Workshop’s president of social impact and philanthropy. Preliminary research conducted in Jordan and Lebanon found that displaced children have trouble finding the language to express their emotions and describe what they feel only very broadly: sad, happy, scared.

The show will focus on identifying and managing emotions, and will be coupled with thousands of outreach workers going to clinics, community centers, homes and other gathering spaces in the four countries, where they will meet with children, parents and caregivers to provide support and extend many lessons of the series. Today, less than 2 percent of humanitarian aid worldwide is targeted at education, “and just a tiny fraction of that goes to early education,” Ms. Westin said. “We’re talking about a generation-scale intervention.”

Just as American “Sesame Street” teaches counting and the alphabet before deeper literacy and numeracy, the new series, called “Ahlan Simsim,” or “Welcome Sesame,” will start with the basics. “We want this first season to dive into identifying different emotions, like frustration and anger, nervousness and loneliness, fear,” Scott Cameron, an executive producer at Sesame Workshop, said. “But we also have to make that entertaining. And we have to do that without, in the case of fear, terrifying the kids.”

To do that, Mr. Cameron and his colleagues built on techniques developed throughout the program’s years on the air. “We thought a lot about the iconic ‘Sesame’ characters who’ve been useful for curriculum goals in the past,” he said. “We need some kind of comedic foils, but we don’t want to do negative modeling — we don’t want villains.”

“Oscar the Grouch, for example, was developed in the very early stages of ‘Sesame’ as a way to represent differences, and a kind of mutual respect,” Mr. Cameron explained. “He’s grumpy, and he thinks smelly fish are great. But he can help model different perspectives. Oscar and Grover and Cookie Monster are all monsters — meaning they’re not humanoid, like Bert and Ernie — so they’re a little bit removed from humans,” Mr. Cameron explained. “You get a little more leeway that way.”

“Ahlan Simsim,” which will air in Arabic and Kurdish, has two main characters. Both were built at Jim Henson’s Creature Shop in Queens, where rows of desks are covered with half-constructed muppets and older ones midrepair. (Muppets bigger than a desk — Mr. Snuffleupagus, for example — might lean against a wall.). Jordan Pioneers Production Company, based in Jordan, collaborated with Sesame Workshop to develop the characters, write scripts and shoot the episodes. When producers from “Sesame” made a series of visits to the Creature Shop last year to discuss muppet design and look at prototypes, Zaid Baqaeen and Khaled Haddad of Jordan Pioneers, the show’s head writer and an executive producer, joined from Amman via video chat.

“Jordan Pioneers pitched us a boy and a girl character that were roughly the same age, and we loved that,” Mr. Cameron said. “Two new friends who go on adventures together.” For names, they suggested Basma and Jad. “Basma means smile, and Jad has a bunch of meanings, but connotes somebody who’s kind of generous but a little bit buttoned up. Very earnest.”

Mr. Baqaeen added: “Completely different, but they complement each other. Basma is dynamic, adventurous, go-go-go. She’s kind of impatient when she’s excited about an idea or a challenge that she wants to take on. Jad, we think of him as the planner, meticulous.” He’s a painter, and he likes to paint plans in midair; viewers will learn that his brush once belonged to his grandfather, who is absent from the show.

What Basma should look like came relatively easily — a purple non-humanoid girl (“Like Elmo is a boy, but not necessarily a human boy,” Mr. Cameron explained.) Skewed pigtails, oval face, no bracelets or jewelry. And no clothing, which can bring in local connotations that interfere with a character’s identity. It can also be hard to adjust: Bert and Ernie have been stuck in striped shirts since 1969.

Jad was trickier. The team passed around some early sketches. “We dragged a whole bunch of our monster muppets out,” said Rollie Krewson, a master builder at the Creature Shop. She and Jason Weber, the Creature Shop’s New York creative supervisor and an expert fabric painter and dyer, call them “anything muppets” — on occasion, they sit in for firefighters or police officers in the background of a scene, or once, for Elmo’s grandmother.

“We had one in a drawer that sounded like what they were describing, just character-wise,” Mr. Weber said. “It has this beautiful roundish head, and the mouth is straight across, but when you change the angle to make eye contact with the viewer, you can start to see a friendly, open smile just underneath.”

Ms. Krewson adjusted the design to communicate Jad’s introversion and express the challenges he sometimes has letting his feelings out. “He can also look very contemplative,” she said. “He’s got a very loose jaw. I can push it way forward, and I can pull his chin back, so he can look perplexed and sad, more internal.”

Mr. Weber added, “He has what we call a very good smile curve.” Smaller touches link the characters visually. Jad’s nose is purple, like Basma’s, and Basma’s nose is Jad’s golden yellow.

The pair is joined by Ma’zooza, a goat sidekick who provides comic relief, mostly by eating everything in sight. “She’s a baby, learning how to walk and climb, and she’s voracious,” in the tradition of Cookie Monster, Mr. Cameron said. “Cookie has trouble with self-regulation, self-control. And Ma’zooza allows Basma and Jad, who are almost six, to have a younger friend that they can nurture, so they’re not always the ones being nurtured. She also has these long, floppy ears, which are adorable.”

Ms. Westin said that “with Basma and Jad, one has left his home, becomes best friends with someone from somewhere else. You can see where that creates opportunities for children to relate to those stories and feel less alone.” Most refugee families live in host communities and neighborhoods, and “the benefit of mass media is that we know we can reach not only displaced Syrian children, but we can reach them side by side with their new neighbors.”

Before shooting could begin, Basma, Jad and Ma’zooza were bagged, packed in boxes and shipped to Amman. Sesame estimates that the project, through television, mobile phones, home visits, preschools and the efforts of educators across the region, will reach as many as nine million children — what they expect to be the largest early-childhood intervention in the history of humanitarian response. To measure its effectiveness with parents, caregivers and on TV, childhood development specialists will design and conduct studies during the project’s first five years.

Their work will double the amount of research available on the experience of childhood in humanitarian crisis. “We’re going to share what works and what doesn’t work, and not just to help us achieve the outcomes we’re setting out to achieve here,” Ms. Westin said. It will be one of the first projects of its scale to think about how fuller lives might be lived within the consequences of the conflict and within long-term crises elsewhere. “We want this project to be a model for humanitarian response not just in the Middle East,” Ms. Westin added, “but for refugee children wherever they may be.”

Mr. Carp (@alexcarp_) is a research editor at The New York Times Magazine.