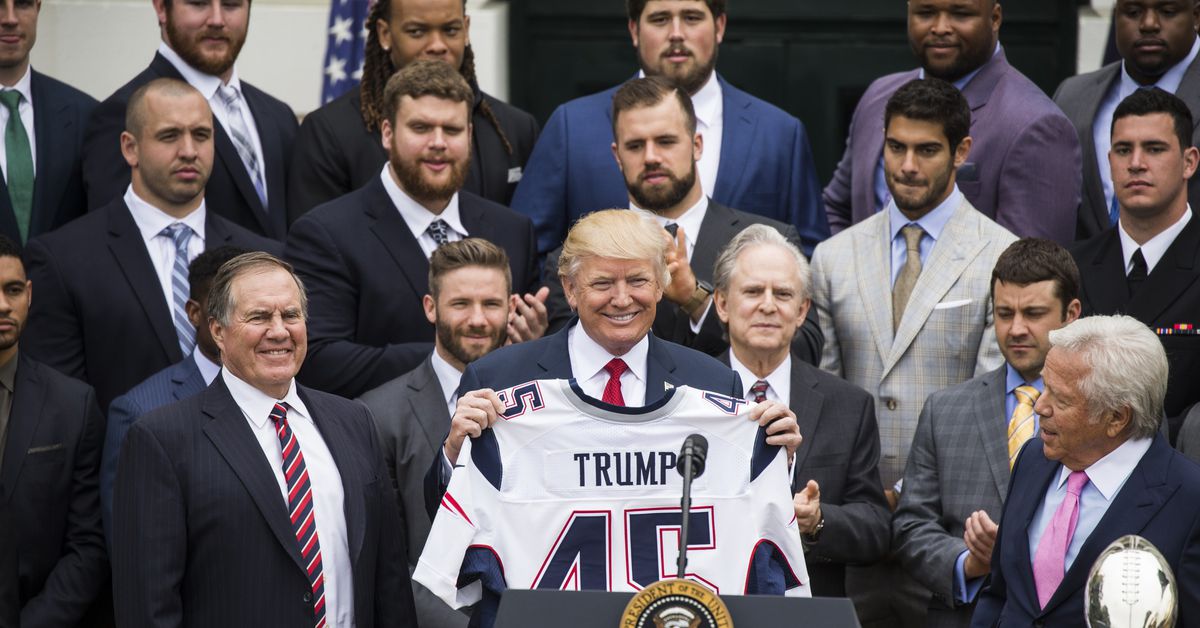 There’s nothing more American than the Super Bowl. There’s very little as American as the Super Bowl, even. Apple pie, Manifest Destiny, drone strikes et al. are in the conversation, but in this era of mass broadcast, nothing brings the country together quite like The Big Game. The combination of choreographed and brilliantly focused violence and hyper-indulgent 30-second homages to capitalism will draw a domestic audience of around 100 million; the Super Bowl is one of the focal points of American life.

Naturally, the President of the United States appears to know essentially nothing about it:

Trump when asked who he wants to win the Super Bowl: “Well, I love them both, let’s just say. But I will tell you, some two very interesting teams and interesting players, some really great players. And it’s going to be hopefully a great Super Bowl.”

There are, of course, any number of things that might catch a President’s attention and be reasonably considered to be more important than a mere sports game. The WHO recently declared the novel coronavirus to be a global health emergency. The United Kingdom has contrived to detach itself from a whole continent. There’s an impeachment trial being soggily conducted in the Senate. There’s an economy to be kept running, recalcitrant countries with whom to diplomatize, and, generally, a whole-ass world to worry about. Given that, should we expect the President of the United States to have an opinion about e.g. Patrick Mahomes?

To be honest, probably not. No matter how important Patrick Mahomes might be to you and me and the entire state of Missouri, he is somewhat less important than, for instance, the specter of a major pandemic out of Wuhan. It would be really quite reasonable for the head of government to focus on governmental things and ignore the Super Bowl entirely. In practice, however, the President making some sort of gesture towards the supremacy of The Game is the done thing, no matter how wrapped up they might be in affairs domestic and global.

Given that (and the fact that the current occupant of the White House appears temperamentally focused on the minutiae of celebrity over the actuality of governance), I don’t think we can reasonably ascribe the President’s non-answer to “too busy with important things to give a shit, sorry.” Rather, it’s the answer of a schoolboy attempting to bluff their way through class without ever having done the reading. Donald Trump knows what the Super Bowl is. It’s a football game. It involves two teams which he can presume to be pretty good and therefore has some players that he can presume to be pretty good. Hopefully, it will be great.

What else does he need to know before he talks about it? There might be nothing more American than the Super Bowl, but refusing to do one’s homework is up there. A fundamental truth behind American public life is the disdain for truth itself. Knowledge itself is irrelevant, sublimated into the seething mass of bullshit that powers the country on essentially all fronts. One must never admit to not knowing something, because that would imply that one cares about ‘knowing’ at all.

What matters is bluffing and bluster. And even bluffing doesn’t really matter, because the entire audience is aware of the bluff in the first place. To seek the truth is to display public weakness. To pursue a bald-faced lie in front of a massive audience? That, in the fractured and Facebooked world of modernity, is strength.

Anyway, good luck to a bunch of players who aren’t Tom Brady in the Super Bowl on Sunday. I’m sure it will be great.