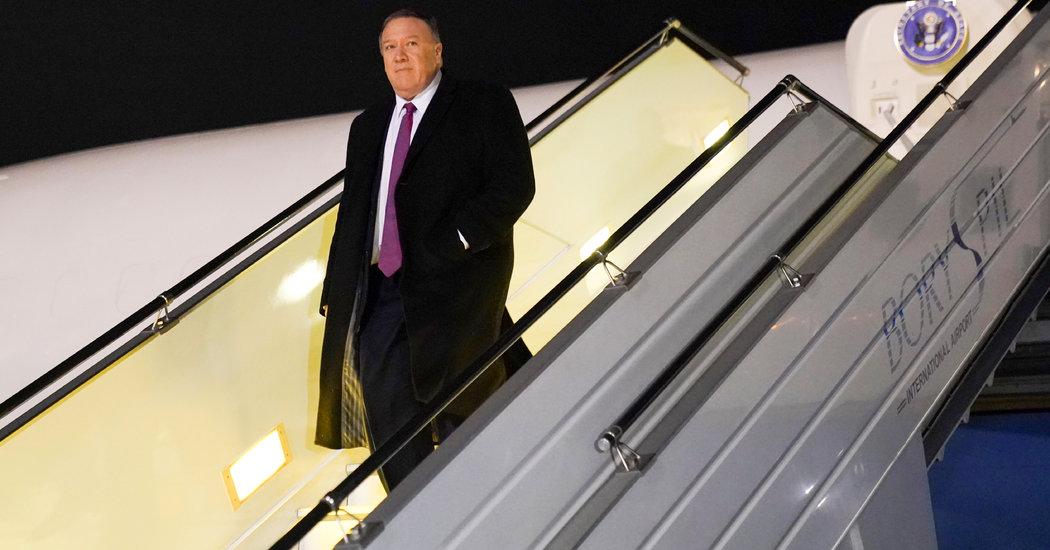 KYIV, Ukraine — Secretary of State Mike Pompeo said Friday after a meeting with President Volodymyr Zelensky of Ukraine that the Trump administration was committed to supporting Ukraine in its defense against aggression by Russia, which invaded and annexed part of the country and is supporting a separatist insurgency.

“Today I’m here with a clear message: The United States sees that the Ukrainian struggle for freedom, democracy and prosperity is a valiant one,” Mr. Pompeo said at a news conference with Mr. Zelensky. “Our commitment to support it will not waver.”

Ukraine is a “bulwark between freedom and authoritarianism in Eastern Europe,” he added.

The two met before noon in the president’s office in central Kyiv, and Mr. Zelensky said they had talked about new steps to strengthen the partnership between the two nations.

“I don’t think these friendly and warm relations have been influenced by the impeachment trial of the president,” he said when asked about whether the impeachment of President Trump had affected ties between Kyiv and Washington.

Mr. Zelensky reiterated that he was ready to meet with Mr. Trump in an official White House visit, which would be an important signal of the status of American support for Ukraine. But Mr. Pompeo said no visit had been scheduled yet. “We’ll find the right time,” he said.

Mr. Pompeo was the first official from President Trump’s cabinet to meet with Mr. Zelensky since the impeachment inquiry focused on Mr. Trump and Ukraine began last fall. Mr. Trump had a brief meeting with Mr. Zelensky on Sept. 25 on the sidelines of the United Nations General Assembly in New York — the day after the Democrats in the House of Representatives announced their opening of the inquiry.

The move by the Democrats was prompted by a formal complaint filed by a C.I.A. whistle-blower who had said that Mr. Trump had pressed Mr. Zelensky in a July 25 call for political favors at the same time he was withholding from Ukraine $391 million of military aid mandated by Congress.

The impeachment trial in the Senate began this month but appeared as of early Friday to be moving to a swift close.

The military aid from Washington, which was released by the White House on Sept. 11, after Mr. Trump had heard about the formal whistleblower complaint, is aimed at helping Ukrainian soldiers fight a years-long Russian-backed insurgency in eastern Ukraine. Hundreds of Russian soldiers are in the region, the Donbas, American officials say.

Ukraine and other European nations want the Trump administration to get involved in talking with leaders in Kyiv and Moscow to help settle the conflict.

On Friday morning, as snow fell lightly in Kyiv, Mr. Pompeo met with Vadym Prystaiko, foreign minister of Ukraine, and went to the golden-domed St. Michael’s Cathedral downtown to attend a wreath-laying ceremony for the soldiers who have died fighting in the Donbas.

More than 13,000 Ukrainian soldiers and civilians have been killed since the war began in 2014, the same year Russia invaded and occupied the Crimean Peninsula on the Black Sea. The conflict has become grinding trench warfare in open fields with regular shelling.

Analysts say Mr. Trump’s actions on Ukraine — which critics say centered on gaining political advantage for his re-election campaign this year — and his open admiration of President Vladimir V. Putin of Russia have weakened decades of American support for Ukraine.

Mr. Trump and his aides deny that he withheld the aid for political reasons, and say that they were requesting that Ukraine conduct legitimate investigations into corruption.

Mr. Pompeo said on Friday, “The United States under President Trump has been the world’s fiercest defender of Ukraine’s sovereignty.”

Ukrainian officials are eager to have Mr. Zelensky visit Mr. Trump in the Oval Office and to have the American president publicly and strongly affirm support for Ukraine. Ukrainian officials are angry that the Americans have granted the Russian foreign minister, Sergey V. Lavrov, two visits with Mr. Trump in White House, most recently in December.

In response to a question on Friday, Mr. Pompeo said a White House visit by Mr. Zelensky was not dependent on the kind of investigation Mr. Trump had sought.

The Ukraine trip is a fraught one for Mr. Pompeo, who arrived here on Thursday night after a stop in London, and plans to travel to three more nations that became independent from Moscow afterwards.

Mr. Pompeo has been dogged by sharp questions over his role in the Ukraine affair and, more recently, an acid comment he reportedly made about Ukraine in a Jan. 24 conversation with a National Public Radio reporter. The reporter, Mary Louise Kelly, a veteran national security correspondent, said that after she asked about Ukraine, Mr. Pompeo shouted at her in a rant full of obscenities and asked her to locate Ukraine on an unmarked map that his aides pulled out. She added that, using the “f-word,” he asked, “Do you think Americans care about Ukraine?”

Mr. Pompeo put out an extraordinary statement the next day that denounced the news media as “unhinged” and banned NPR from joining the pool of reporters on his current trip. His actions have been widely criticized by press freedom advocates and foreign policy experts.

Mr. Pompeo enabled Mr. Trump’s actions on Ukraine by ordering the recall of Marie L. Yovanovitch, the respected ambassador to Ukraine, last April. Mr. Trump’s personal lawyer, Rudolph W. Giuliani, and associates with Ukraine business ties had been pressing the president hard for the ouster of the ambassador, who had been an anti-corruption advocate.

In May, after Ms. Yovanovitch moved back to Washington, Mr. Pompeo asked a former ambassador to Ukraine and veteran diplomat, William B. Taylor Jr., to be chief of mission until a new ambassador was appointed. Mr. Taylor, along with Ms. Yovanovitch and other diplomats, defied administration orders not to testify in the impeachment inquiry; Mr. Taylor spoke of how he gradually discovered Mr. Trump’s Ukraine plans over the summer, which administration critics say undermined American support of Ukraine by withholding aid.

Mr. Trump’s main demand of Mr. Zelensky was that he announce investigations into Joseph R. Biden Jr., the former vice president and a leading Democratic presidential candidate, and his son Hunter Biden, who had been on the board of Burisma Holdings, a Ukrainian energy company.

There is no evidence or suggestion that the older Mr. Biden acted inappropriately on Ukraine policy because of his son’s corporate ties.

On several occasions, Mr. Pompeo, an ardent Trump loyalist, has reiterated Mr. Trump’s conspiratorial assertions about Ukraine, the Bidens and questions of interference in the 2016 presidential election — assertions that have been discredited and have angered the Ukrainians.

“As secretary of state and C.I.A. director, Mike Pompeo had every opportunity to put his mark on Russia and Ukraine policy,” said Andrew S. Weiss, a former American official who worked on Russia and Ukraine and is now at the Carnegie Endowment for International Peace. “But at nearly every turn he focused instead on the audience of one — Donald Trump.”

“That’s why he turned a blind eye when Trump and cronies like Rudy Giuliani decided to totally dismantle the Ukraine policy framework that has been in place since 1991 and, knowingly or unknowingly, did a huge solid for the Kremlin,” he added. “Making a short pitstop in Kyiv hardly begins to undo the damage that has been wrought.”

Mr. Pompeo canceled planned trips to Ukraine twice — once in November and once at the start of January.

“Russia is fighting a hybrid war against Ukraine, Europe and the United States,” Mr. Taylor wrote in a Jan. 26 op-ed in The New York Times. “This war has many components: armed military aggression, energy supply, cyber attacks, disinformation and election interference. On each of these battlegrounds, Ukraine is the front line.”