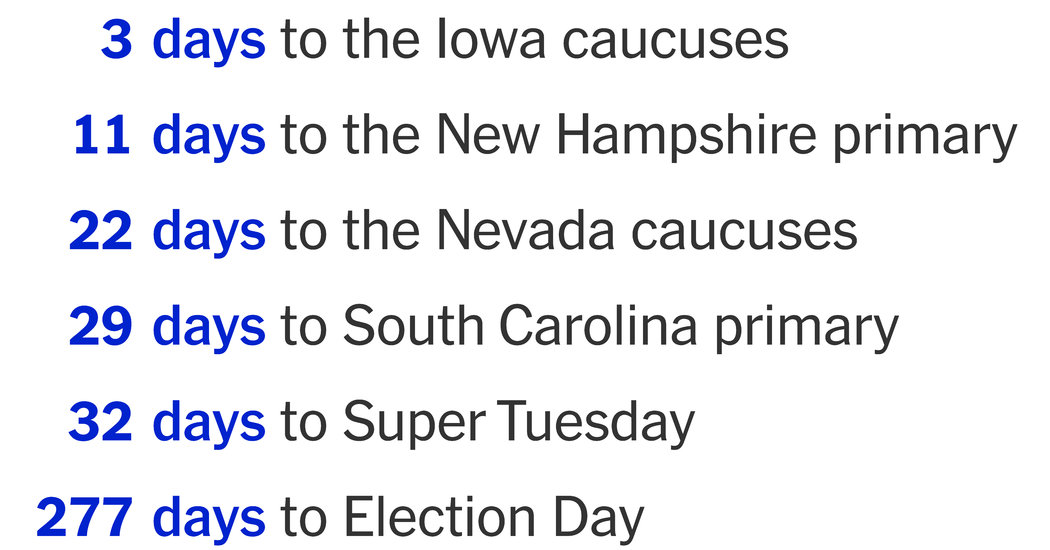 Good morning and welcome to On Politics, a daily political analysis of the 2020 elections based on reporting by New York Times journalists.

Sign up here to get On Politics in your inbox every weekday.

Where things stand in the race

Photo of the day

It wasn’t quite Phil Hartman-as-Bill Clinton stopping into McDonald’s for a mid-jog bite, but Biden’s unannounced stop for ice cream at a Dairy Queen in Pella, Iowa, on Thursday turned the line for fast food into a news conference. Care to know more? You’re in luck …

PELLA, Iowa — As Biden laced into Sanders on Thursday afternoon, his attacks came at an incongruous location: a Dairy Queen.

“Peanut butter cup!” came the call from behind the counter, just as Biden noted the “self-evident” contrasts between himself and his rivals.

“Who’s the cookie dough?” asked Biden, who had ordered frozen treats for his staff. He offered the same to the small group of reporters — “It’s not like I’m bribing ya” — but, sticking to their ethical standards even in the face of such temptations, the journalists declined, pressing him instead on Social Security, gun control and whether his campaign had indeed tried to forge any alliances with rival candidates.

As the blenders whirred, Biden professed no knowledge of such agreements, but said: “Every campaign I’ve been involved in, in the caucus, everybody’s looking as, O.K., if your guy doesn’t win or your person doesn’t win, who you going to go with?”

Then he turned back to the ice cream.

On the road with Elizabeth Warren

URBANDALE, Iowa — Far from the rallies and debate stages, the final days before the caucuses have come down to this: a small army of volunteers trudging through snow with clipboards and messenger bags to knock on doors that have been knocked so many times there may as well be fist imprints in the wood.

I tagged along this week with Zeb Beilke-McCallum, 37, a Warren organizer, as he canvassed outside Des Moines. Iowans are famous for choosing their candidates late, so I figured we’d meet a lot of undecided caucusgoers. But most had made up their minds.

“I can tell you I am caucusing for Elizabeth Warren — she’s exactly who I’m caucusing for!” Kelsey Jenn, 30, said breathlessly, dashing after the pit bull who had bounded out of the house to greet his new friends.

“Medicare for all” was one draw, and “I know she stands for teachers — I’m a teacher,” Jenn told me, herding the dog back inside. Bernie Sanders “also has great ideas,” she added, “but she seems to have more of a concrete idea of how to get there.”

It wasn’t surprising that most people were decided, Beilke-McCallum told me. “A lot of times I’m really just there to reflect back to them what they’ve already figured out for themselves,” he said.

At the next door, we finally met an undecided caucusgoer: Amanda Woodruff, 38, who runs a home day care program and came to the door with four children crowded around her legs.

“I kind of like Mayor Pete,” she said. “I don’t know a lot about Elizabeth. I don’t even know if I’m going to caucus yet, so I just haven’t really decided. I figured this weekend I’d try to decide.”

Warren’s universal child care plan was a draw, she said after Beilke-McCallum mentioned it.

The question-and-answer phase of the impeachment trial came to a close on Thursday, but not before some fireworks.

Chief Justice John Roberts blocked a question from Senator Rand Paul that would have revealed the identity of the C.I.A. whistle-blower whose account helped set off impeachment.

And Alan Dershowitz, a member of Trump’s legal team, stood by his controversial argument that anything a president does to ensure his own re-election is inherently in the public interest — even as he accused the news media of distorting his words.

But all of this commotion could come to a close on Friday. A key Republican senator, Lamar Alexander of Tennessee, said late Thursday that he would vote to block new witnesses and evidences. It was a strong sign that Republicans have the votes to move toward a quick acquittal, which could happen as early as Friday afternoon.

But Chuck Schumer, the Senate minority leader, suggested that he might use parliamentary maneuvers to delay that vote. “The minority has rights, and we will exercise those rights,” Schumer told reporters on Thursday. But he left it at that.

This is the end of Week One of our reimagined On Politics morning newsletter. We’d welcome your thoughts and suggestions — reach out to us at onpolitics@nytimes.com.

On Politics is also available as a newsletter. Sign up here to get it delivered to your inbox.