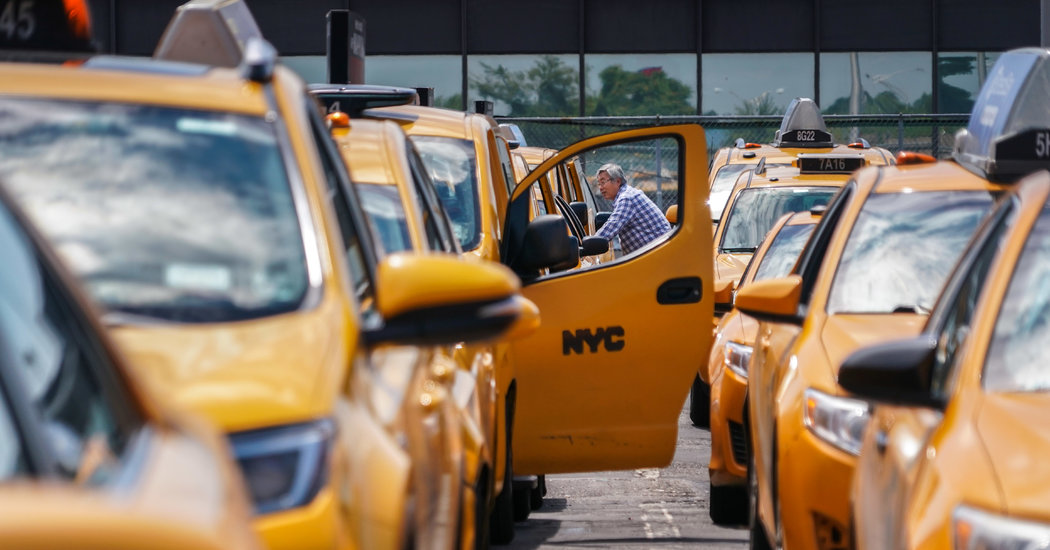 New York City should consider allowing yellow cabs to use some of the same strategies as the ride-hailing companies Uber and Lyft, including so-called surge pricing when demand is high, a government panel is set to recommend.

If the idea is implemented, New York could become one of the first cities in the United States to allow cabs to raise prices at certain times. It would be a significant change in a city where regular riders can typically predict how much a taxi trip will cost.

The recommendation will be unveiled on Friday as part of a broader plan to rescue the city’s taxi industry from financial crisis, according to a draft obtained by The New York Times.

The biggest element of the plan will be a proposal to create a public-private fund worth as much as $600 million to bail out thousands of drivers who became trapped in exploitative loans while buying medallions, the city-issued permits that let them own their cabs.

The panel was formed after The Times reported that a handful of taxi industry leaders artificially inflated medallion prices and then channeled immigrant buyers into one-sided loans. The business practices led to a speculative bubble that burst in late 2014, wiping out the life savings of thousands of drivers and creating a debt crisis that was intensified by new competition from ride-hailing companies.

The panel met for six months and came up with dozens of recommendations for helping the industry.

The proposal on surge pricing, also called dynamic pricing, is likely to be among the most controversial. Riders have long complained that Uber and Lyft make customers pay exorbitant rates in bad weather and on holidays. (A tweet showing a $126.84 price for an Uber to Kennedy International Airport recently went viral; a taxi from Manhattan to that airport costs $52.) Uber has said it needs to use surge pricing to keep wait times low.

It is unclear if cabdrivers would support the idea, and the panel’s report will call only for a study of the possibility.

Some panel members voiced concern about surge pricing, saying it could reduce demand for yellow cabs. But the issue is worth studying, they said.

The panel will also recommend that the city consider buying back medallions from people who bought them at city auctions, according to the draft. It also wants the city to work with state lawmakers and the federal government to ban many of the lending practices that led to the medallion bubble.

In order for yellow cabs to compete with Uber and Lyft, the report will suggest improvements to the app that lets riders hail cabs by phone.

“Urgent action is needed,” the panel wrote in the draft report. “It is imperative that regulators, governments, the medallion industry, and private actors work quickly to develop an option for medallion owner debt relief and take steps to stabilize and modernize medallion taxi service, if it is to remain a competitive and viable transportation option into the future.”

All of the proposals in the plan are tentative, and many — including the recommendation regarding surge pricing — are couched in calls for further studies. But officials emphasized that the panel members had worked hard for months to develop the plan.

“They’ve done extraordinary work, and I think they’re all good ideas,” said Corey Johnson, the City Council speaker, adding, “We have to figure out how to implement them.”

Mr. Johnson said for the first time that he supported the idea of a driver bailout and urged the mayor to join him in working out the details.

“I am totally on board with that. I support it,” he said. “Now that the report is done, we need the mayor’s full engagement to figure out concretely how we’re going to move forward.”

A spokeswoman for Mayor Bill de Blasio referred to his comments earlier this month, when he said he thought the proposal for a bailout funded with little, if any, city money “might offer a positive way forward.”

The panel was created by the City Council and was led by two influential council members, Stephen Levin of Brooklyn and Ydanis Rodriguez of Manhattan. Its 19 members were chosen mostly by Mr. Johnson with some additional appointees by Mr. de Blasio.

The price of a taxi medallion rose to more than $1 million by 2014, from about $200,000 in 2002, even though the revenue that cabs could generate barely changed. During the bubble, government officials worsened the problems by exempting the industry from regulations, and the city sold medallions and ran advertisements promoting the permits as “better than the stock market,” The Times found.

In the years since the bubble burst, more than 950 cabdrivers have filed for bankruptcy, and thousands more have lost their savings. Several have died by suicide.

Industry leaders have denied wrongdoing, describing their tactics as normal business practices and noting that regulators approved their methods. They have blamed the industry crisis exclusively on Uber and Lyft.

The government panel largely confirmed all of The Times’s findings, including by conducting its own data analysis. It found that on average, each medallion owner owes about $700,000 and must pay $2,900 a month in loan payments.

It also found new evidence that some medallion brokers, who were supposed to find the best deals for drivers, instead guided them toward certain banks in return for loan provisions that aided their own businesses, according to the draft.

Bhairavi Desai, the founder of the Taxi Workers Alliance and a panel member, said the proposal that has generated the most excitement has been the idea for a bailout.

The proposal calls for a public-private partnership to buy medallion loans at discounted prices and ease the burden on borrowers by forgiving much of the debt and lowering interest payments. Investors to the partnership could receive incentives for contributing to the fund and would earn a return on the loans.

Panel members will be meeting next week with the National Credit Union Administration, a federal agency that now holds many of the loans, Ms. Desai said. They will try to convince the agency to hold off on selling any of its loans until the partnership is set up, she said.

The National Credit Union Administration, which oversees credit unions nationwide, has said it cannot discuss its medallion loan portfolio. The agency took on the loans after closing several credit unions involved in the taxi industry for unsafe lending practices.

Ms. Desai added that she had already heard from several potential investors, but she urged those interested to come forward quickly.

Other panel members highlighted other proposals, including the surge pricing recommendation and another to inform customers exactly how much their trip will cost as soon as they enter the cab.

“We must consider all options when determining ways to save the taxi medallion industry,” said Mr. Rodriguez, the panel co-chairman. “If the report’s recommendation is taken on dynamic pricing, we need to be sure that it is looked at closely during its implementation to ensure that drivers are not negatively impacted in the future.”