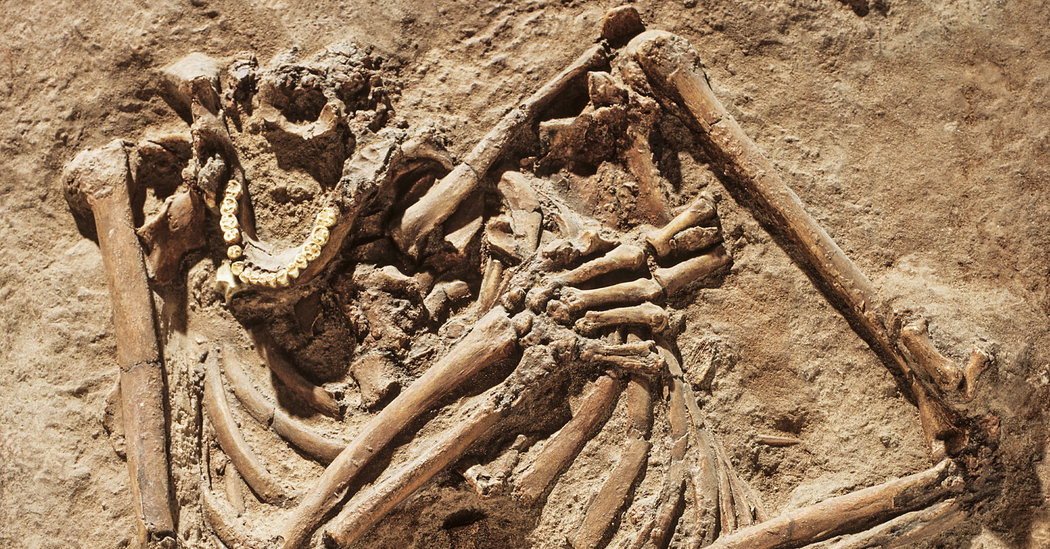 In recent years, millions of people have been astonished, even thrilled, to learn from those popular genetic tests that their DNA is laced with Neanderthal genes.

Those genes were first discovered in 2010, in a study of Neanderthal fossils. From DNA recovered from the bones, researchers deduced that modern humans interbred with Neanderthals some 60,000 years ago, after leaving Africa.

As a result, the genes of non-Africans today are 1 percent to 2 percent Neanderthal. People of African ancestry, it was thought, have little to no Neanderthal DNA.

Using a new method to analyze DNA, however, a team of scientists has found evidence that significantly reshapes that narrative.

Their study, published on Thursday in the journal Cell, concludes that a wave of modern humans departed Africa far earlier than had been known: some 200,000 years ago.

These people interbred with Neanderthals, the new study suggests. As a result, Neanderthals were already carrying genes from modern humans when the next big migration from Africa occurred, about 140,000 years later.

The scientists also found evidence that people living somewhere in western Eurasia moved back to Africa and interbred with people whose ancestors never left. The new study suggests that all Africans have a substantially greater amount of Neanderthal DNA than earlier estimates.

“The legacy of gene flow with Neanderthals likely exists in all modern humans, highlighting our shared history,” the authors concluded.

“Overall, I find this a fantastic study,” said Omer Gokcumen, a geneticist at the University at Buffalo, who was not involved in the research. The research offers a view of human history “almost as a spider web of interactions, rather than a tree with distinct branches.”

But while evidence has been building that modern humans left Africa in waves, and that those migrations began much earlier than once thought, some scientists disputed the evidence that people of African descent may be carrying Neanderthal genes.

David Reich, a geneticist at Harvard Medical School, praised much of the study but said he had doubts about how extensive the flow of DNA back to Africa could have been. “It looks like this is a really weak signal,” he said of the data.

The ancestors of humans and Neanderthals lived about 600,000 years ago in Africa. The Neanderthal lineage left the continent; the fossils of what we describe as Neanderthals range from 200,000 years to 40,000 years in age, and are found in Europe, the Near East and Siberia.

Despite their reputation as brutes, Neanderthals showed signs of remarkable mental sophistication. They were adept hunters, and appear to have made ornaments as a form of self-expression.

Ten years ago, Dr. Reich and his colleagues gathered enough bits of DNA from fossils to create the first rough draft of the Neanderthal genome.

When the researchers compared it to the genomes of eight living people, they found that the Neanderthal was a little more similar to the people of Asian and European descent than to those of African heritage.

Roughly 60,000 years ago, the researchers argued, modern humans must have expanded from Africa and interbred with Neanderthals. The hybrid descendants passed their genes to later generations, who spread around the globe.

That hypothesis has held up well over the past decade, as paleoanthropologists have extracted more complete Neanderthal genomes from other fossils.

But Joshua Akey, a geneticist at Princeton University who carried out some of these studies, grew dissatisfied with the methods used to look for Neanderthal DNA in living people. The standard method was built on the assumption that most Africans had no Neanderthal DNA at all.

Dr. Akey and his colleagues figured out a new method, which they call IBDMix, that takes advantage of the fact that relatives share stretches of matching DNA.

Siblings, for example, share many long, identical stretches of DNA. But their children will have fewer identical segments, which will also be shorter. Distantly related cousins will have tinier matching segments that require sophisticated methods to uncover.

Dr. Akey and his colleagues figured out how to search the DNA of living humans and remains of Neanderthals for these minuscule matching segments. Then they pinpointed the segments that came from a relatively recent ancestor — and therefore were a sign of interbreeding.

The scientists searched 2,504 genomes of living humans for segments that matched those in a Neanderthal genome. When the scientists tallied up the results, the results took Dr. Akey by surprise.

The human genome is detailed in units called base pairs, about 3 billion such pairs in total. The scientists found that Europeans on average had 51 million base pairs that matched Neanderthal DNA, and East Asians had 55 million.

Africans on average had 17 million base pairs that matched Neanderthal DNA — far higher than predicted by the original models describing how humans and Neanderthals interbred.

“That was just so completely opposite to my expectations,” said Dr. Akey. “It took a while to convince ourselves that what we are finding with this new approach was actually true.”

Looking at the size of these shared segments and how common they were around the world, Dr. Akey and his colleagues realized that some were the result of interbreeding very early in human history.

Other experts said the new study offered compelling support for earlier hints for this ancient expansion. Last year, for example, a team of scientists reported finding a modern human skull in Greece dating back over 210,000 years.

Other researchers discovered small fragments of DNA in Neanderthal fossils that showed a striking similarity to modern human genes.

Despite his hesitation over the analysis of African DNA, Dr. Reich said the new findings do make a strong case that modern humans departed Africa much earlier than thought.

“I was on the fence about that, but this paper makes me think it’s right,” he said.

In recent years, Dr. Reich and other researchers have found evidence that ancient people from the Near East moved back into Africa in the past few thousand years and spread their DNA to many African populations.

Dr. Akey and his colleagues confirmed this migration, although their study suggests that it may have taken place over a much longer period of time and introduced much more DNA into populations across the continent.

Janet Kelso of the Max Planck Institute for Evolutionary Anthropology in Leipzig, Germany, who was not involved in the study, found this conclusion “quite convincing.”

The findings may allow researchers to begin pinpointing segments of Neanderthal DNA in living Africans.

Sarah Tishkoff, a geneticist at the University of Pennsylvania, is doing just that, using the new methods to look for Neanderthal DNA in more Africans to test Dr. Akey’s hypothesis.

Still, she wonders how Neanderthal DNA could have spread between populations scattered across the entire continent.

“I’m still trying to wrap my head around that,” she said.